This is way too awesome to have been viewed so little, especially toward the end. Enjoy!
http://m.youtube.com/watch?v=C-tY_IeOI4o

As promised here are the tabs to go along with my latest lesson video download them here:

If you enjoy my lessons please show your…

Here are some backing tracks in G chord. There pretty good. Also, I just found some good country karaoke on you tube.

Josh Gayou had generously created this advanced book on building guitars and shared it with us.

You can find it here:

I was blessed with a special treat the other day. One of the guys at church, Larry, was out in Portland when he and his company decided to visit a cigar shop. He knew I was building cigar box guitars and asked the owner if he had some boxes he could buy. The owner I guess asked this guy named Mike to help him out. Mike went through and tapped on a few before deciding on a couple of boxes…
Continue

Hi guys,
This was my first build using a pine 2x1 for the neck and a Punch cigar box. I decided to go for a through neck design with the neck glued on as that seemed to be the easiest and I didn't want to be over ambitious for my first build. The main problem I had was putting the tuners onto the head as the tuners I had were from a classical guitar but I didn't have means to cut the hole through the neck necessary for the tuners to slot into. So I just decided that as they were individual… Continue

Here's a short tab for the Pink Floyd riff from Money as played on a four string CBG tuned to open G. The Beginning letters represent the tuning. Low string represented on the bottom as in traditional tablature.

Here are the tabs for my latest lesson 'Bluegrass Cigar Box Guitar'. Will be posting up more videos on this topic. Watch this space.... 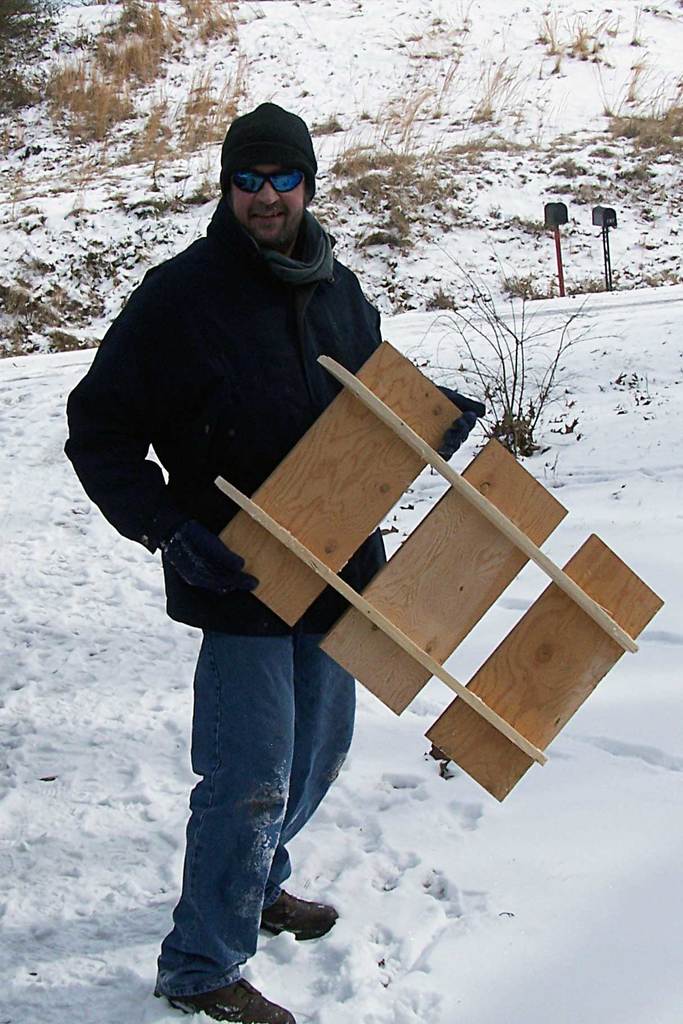 Road in front of my house was frozen solid during that bit winter weather the South got a couple of weeks ago. I threw together a sled...took longer to walk to the shop and back than to build. Fun was had by all for the rest of the day and part of the next. Not a bad use of  2 scrap pine 1x2s and 3 leftover cabinet…

A custom build for a customer

Finished this custom build for a customer. Used a My Father's Cigars Box, which I have come to like very much. It has a lot of tone. The neck is aspen and the fingerboard is curly maple. Finished in tung oil. Pick up wound to 9.5 ohms.…

Tail pieces for a cbg :)

I would love to hear about peoples ideas or inventive ways on.. what or ..how they make their tail pieces... :) 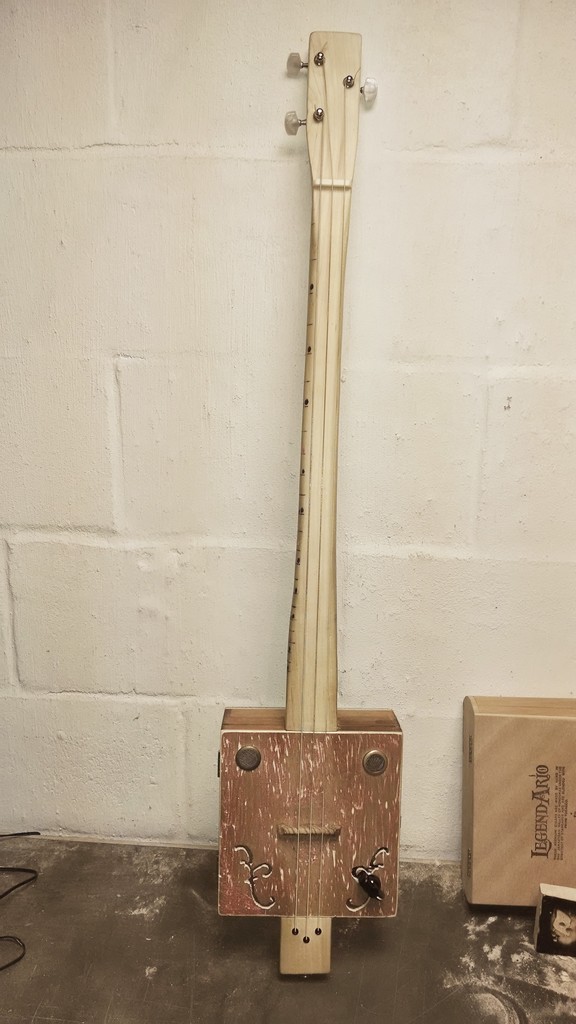 She's a beauty, and she sounds great.  The through-body neck is one solid piece of hard maple.  The box is a CAO box with the markings scratched off, to be a little more kid friendly. I got the parts from C.B.Gitty at the 2013 CBG festival in York, Pennsylvania. …

"PARANOID" A tribute to Black Sabbath

Hi everyone not been on the site for a while due to a busy time for the band ,work and a few other projects
Anyway I'm going to be doing another tribute album to Black Sabbath playing only CBG's .
Does anyone remember buying their first sabbath album and wondering how great THAT sound was , let's blow off the cobwebs turn up the amps and show the boys what a CBG is capable of
If you would like to be included in this album please post up if your in and what song your gonna… Continue I was never really happy with it: the box I had made (out of 6mm ply and 3mm sapele for the soundboard) was big and a bit unwieldy, I had also originally intended to have only 9 holes on either side…

Eric Sommer: A Great Slide Player could use your help!

A great slide player and true road warrior was in a car accident recently during the last big snow storm we had on the East Coast. You can go here to see the details: http://www.gofundme.com/6p1kdk

Any help at all will truly be appreciated, even if it's just reposting the link. If you've never seen Eric in action here's a sample of him playing on one of his 7 or so guitars he brings onstage. Thanks!…

A Facebook group for guitar lovers, luthiers and nuts~

Post ads for the purpose of buying, selling, trading or just showing off what you have or what your working on.

REMEMBER TO SPECIFY ANY NEEDED INFORMATION IN REGARDS TO A SALES TRANSACTIONS YOU ARE ENGAGING IN AND USE SAFE BUSINESS PRACTICES...COMMON SENSE!

My Gear: Presented by Robin Williams!

This post isn't exactly about cigar box guitars, but it's relevant to acoustic musicians in general. I hope you like it! 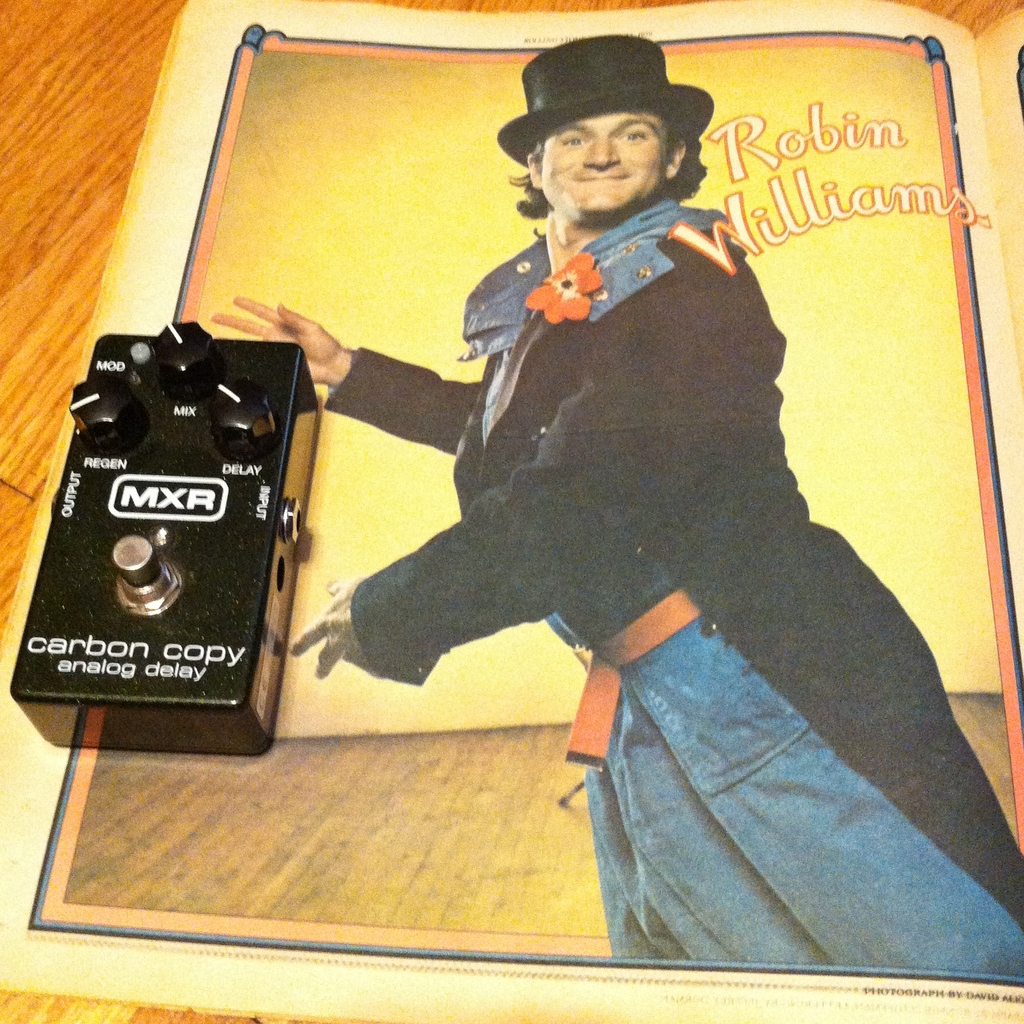 Did a little two track ep of my slide guitar blues

Started by the anonymous pick in Performances, How to Play, Lessons, Concerts. Last reply by Andries D. EKER 1 hour ago. 15 Replies 0 Likes

Started by Tim W in Performances, How to Play, Lessons, Concerts. Last reply by Cause the Blue rat 6 hours ago. 7 Replies 0 Likes

Started by KOOL DOG HOOCH in Other stuff - off topic, fun stuff, whatever. Last reply by Jerry Jordan 16 hours ago. 1 Reply 1 Like

"AD that was some awesome picking. I love the sound of that guitar great job"
48 minutes ago

"Someday when I become rich and famous I am going to own a swamp witch guitar. Love the sound of…"
56 minutes ago

"Poorness don't believe I have heard that one before. I love Johnny Cash songs. I play several…"
1 hour ago

"Don't surrender to temptation Dave, Looks like that blonde in that photo is reeling you in.…"
1 hour ago

"Nicely done Dave, some really nice pickin and good vocals, We still haven't gotten much of…"
1 hour ago