You may have seen some of those cool "lightning strike" woodburned fretboards and stuff, but it's always seemed way too dangerous for me to want to have a go at. I've just picked up on this UK news article about a man who died whilst trying this technique. It's a harrowing and very sad event, and I'd urge anyone thinking about trying this to consider the very real dangers.

I take this as a reminder not to jury-rig power tools or electrical equipment - this can and does have fatal results. You don't get a second chance when death comes dashing into your workshop with a 2000volt homemade thunderbolt. Please be careful out there.

Chickenbone, thanks for posting this article. A shame this fellow died, but when I read "microwave transformer, jumper cables, and crocodile clips" I cringed. In my youth I attempted some questionable device construction (lack of funds usually generated my schemes), and though nothing tragic occurred, my rearward glances displayed a few critical safety details were lacking in my planning. This is CB Nation, but I'm sure many readers herein have used questionable practices in other endeavors throughout auto/home/mechanical repairs and/or improvements. I got to get sorta old, and live to tell the tale. Saws, drills, joiners, etc. have lots of juice, and fast moving, usually sharp parts. Heat, too. It's best to beware, and pass these experiences and warnings to your younger cohorts. Oh yeah, those pesky owners manuals are there..and not just to C.Y.A. the manufacturer.

I kept the transformer from our dead microwave to make a jacobs ladder, but this looks far more interesting.  Some videos show a fairly safe looking set up and some of the results are incredible.  The handheld ones are nuts in my opinion.  I would do it outside and definitely keep far away!

It's very sad when something that should be a creative hobby ends like this.

The problem is that it's easy to get engrossed in a project and just press on without fully appreciating the increasing danger.  You sometimes need to pause, step back and ask "what am I doing and is it safe ?".  That's often easier said than done.

Thanks for highlighting this tragic event, John.

Sad story. I've talked myself out of stuff several times with the idea of headlines like this.

I u tubed after i saw your post John, it IS fraught with danger if done without proper planning and discipline, 1 of the video's had me wondering if the bloke who did it was still alive, water, electricity and short cuts make a bad brew, the electric shock in this case was probably always likely, but the fire was avoidable if the poor guy had someone with him

They reckon he was most likely dead before the fire took hold. I love the appearance of this sort of woodburning, but there is no way I'd ever attempt it. High voltage electrics are outside my experience, and I'm not going to try this.  Everything I've seen is home-made and there's no dedicated commercial gear on the market, so the potential for things going wrong is ever present. No company is going to sell a device for hobbyists that will put out thousands of volts and lethal levels of current, and indeed someone pointed out on Facebook that there simply isn't a safe way of doing it, it will always have a significant risk of a fatal consequence. For anyone familiar with doing health and safety assessments, that's two phrases you don't want to see in close proximity..."significant risk" and "fatal consequence".

I'd never heard of this till John posted a couple of weeks ago, so i went to U Tube to have a look, as i posted earlier, i was amazed at the methods some guys were using, pushing their luck to the limit, including spraying on water to encourage arcing as they were burning, and PPE was near non existent. Being curious, and having an old microwave on hand, plus most of the other stuff except, some flexible hi volt/ high temp cable i set out to see if i could make a safer method. in and on a non conductive box i mounted an on/off switch, then a 30 m/amp breaker, then to an oven temperature control switch  with the active and neutral in series going to a fan and light, [both from the microwave], this allows me to power up the fan and warning light and stopping current to the transformer until i use the oven switch and controller to feed the transformer, i did want to have the controller before the box so there was no need to even touch the amplifier box during burning, but to do that i would have to run a second 240v input to the box for the fan and warning light because connected inline after the controller the transformer and warning light become alive at the same time, making the light only marginally useful. To me, this seems a pretty safe set up to the primary of the transformer. Now the secondary, with my very limited electrical knowledge, i could come up with nothing that could make the unit totally safe, not even nearly safe actually, so I went down the isolation path, i set up my work on plastic wheely bins, non conductive and a nice height, then i put  physical barrier between the work and me, but close enough to reach the switch and controller, then behind me i run the power supply waist high to the wall outlet, so to go around the barrier, i have to unplug the power from the wall, not foolproof , but good discipline is needed, and to evade the cord, you need to make a deliberate decision to do so. As i said earlier, my electrical knowledge is very basic, any one seeing a way to make this safer is welcome to add their thoughts, as John said it is a very dangerous process, and on the output side, any mistake could be your last 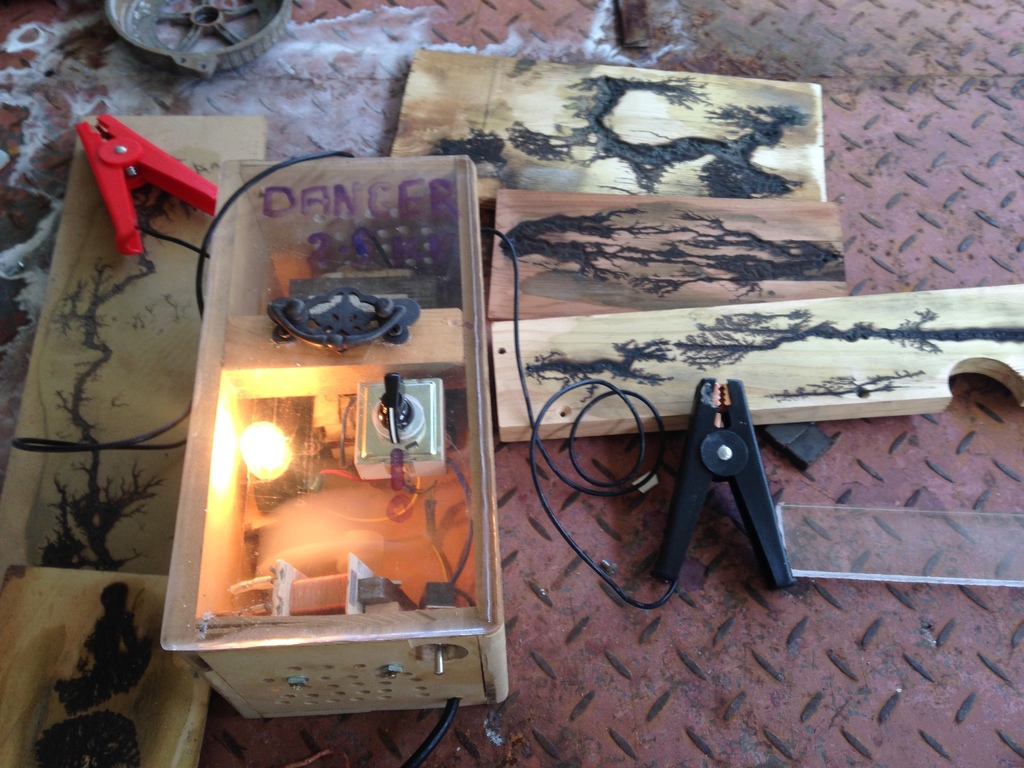 I did the same thing as Darryl did after seeing the posting.  I did it outside on concrete, and was very careful.  It still was scary and a little unpredictable, some pieces came out nice and others hardly did anything.  In the picture the white oak did great, red oak was ok and pallet wood was nice too.  The oak is 1x2 intended for necks of some sort.

That bottom one is nice Kigar, varying woods do burn very differently, soft woods really flare up and gouge heavily, i hope to be able to manage that with the oven controller, so far i've only burnt at full power while testing the set up

Thanks, these were my second try, I put nails into the wood for connection points, it seems to work better than resting the leads on top.  Also I elevated the pieces on a couple of scraps and tried to keep the water off of the sides and bottom of the wood, that helped too I think.  Maybe you could try less baking soda to slow things down.  Stay safe!

I was aftraid this would happen... There were a couple very irresponsible youtube videos on how to do this, one had a microwave transformer and all the wiring exposed on a desk indoors...  Sigh.

I've mady many lichtenberg figures, but I've also worked with high voltages for years.  This stuff is nothing to be casual about!   My 9KV neon sign transformer can kill, and I remind myself every time I use it.

Heck, we don't use a switch to turn it on and off, it gets unplugged every time...

This is no different than using a radial arm saw or table saw... we need to understand the dangers and put in place practices to minimize them.  Accidents don't just happen... I strongly believe that they are avoidable.

My thoughts go out to his family.   Be safe.

"You are right Kale! All I know about Nirvana is that they had a lefty guitarslinger. Adam you…"
2 hours ago

"Thx, yes, I've never seen/heard it done prior and truly LOVE it!! All the goods from one pup,…"
2 hours ago