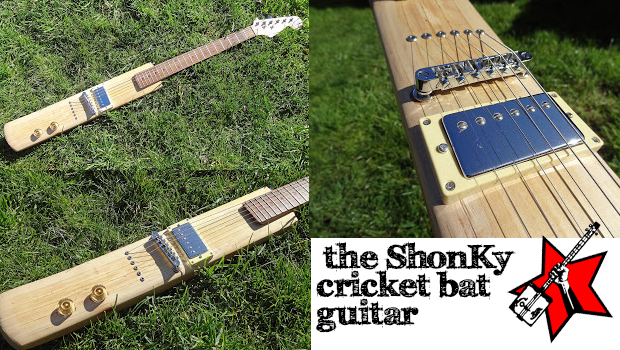 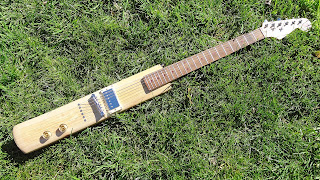 I'm not the first person to have built a cricket bat guitar. famously captain sensible sported one although not a real cricket bat I believe.
I was asked If I could make one for a commission and I thought how hard can it be.
as it turns out, not as straight forward as you would think. but as I was going to make one I wanted it to be a good one.

I decided on a tune-o-matic bridge and decided to go for a string through rather than a tailpiece as the posts would have been close to the edge of the guitar.

Most electric guitar bodies are a flat piece of wood whereas a cricket bat doesn't have a flat straight side apart from thankfully the edges. the back is curved with a ridge which expands about two thirds of the way down. the front is concave curve along its length and an arched top more arched than a les paul.

I managed to route out the neck pocket and humbucker cavity without much drama as I could hold the bat in my vice with the top of the bat at the same level as the top of the vice jaws and the templates rested nicely across these.
My first couple of attempts at drilling the post holes  failed miserably due to not being able to keep the bat straight under my admittedly woeful pillar drill.  The distance was ok but the holes where at slightly different angles the bridge wouldn't sit on the posts.
This meant I had to make some jigs to hold the bat steady so I cut v shapes into some blocks of old wood roughly sanded them so the bat sat in them without moving. a bit of double sided tape ensured a steady hold and managed to drill the holes perfectly after that.

I also had to fashion a block of wood to make the neck joint wide enough for the screws, create recesses for the knobs to sit in, and also shape the inside curve of the pick up ring to match the curve of the body.

One thing I forgot to take into account was the holes for the wires. The natural place for the controls are behind the bridge and the jack socket fits nicely at the bottom of the bat but having drilled the holes for the posts and the strings I then had to some how navigate the holes from the control cavity to the pick up route. first attempt I went through the post hole which wasn't a problem as I used that for the earth second attempt I managed to get past all the holes but missed the pickup cavity luckily without exiting through anywhere else.  3rd attempt was successful.  I have a commission for another one and will probably go for a top loading bridge. maybe a wraparound type which would be simpler as a fender hard tail style will require a flat surface. .

Apart from those issues the remaining build was fairly straight forward and I really like the finished result Its very odd to play due to the small width and the ridge on the rear makes it want to lie slightly horizontally the best way is definitely on a strap fairly low strung. and it balances fairly well and I think I've knocked it over the boundary with this one :-D. 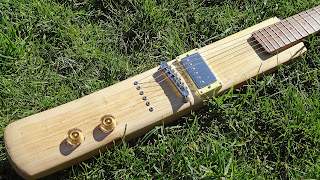 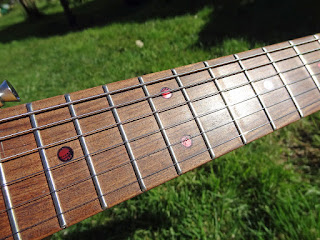 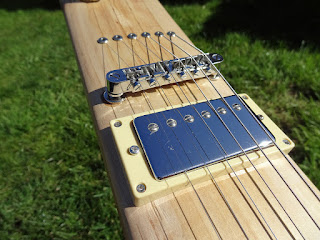 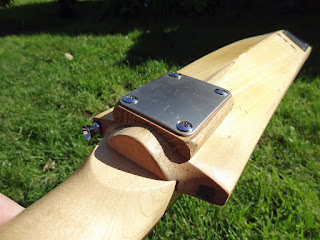 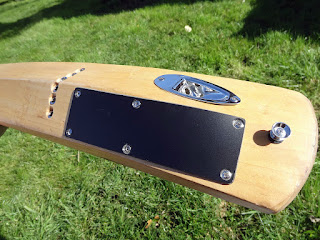 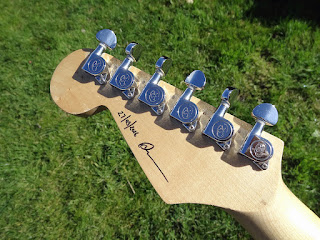 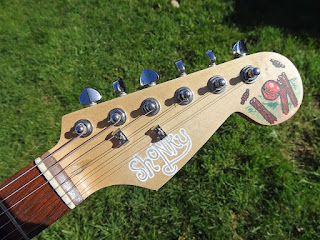 Tony Yes it did have some marks. But not as bad as that.  It did have the Tape stuff on though and I sanded it down a fair bit too.

Hey Antony, When a cricket bat gets used the cricket ball ( usually red ) leaves a mark on the bat, these are known as cherries, i hope that explains my cherries comment :) Very nice looks great, have you thought of putting a few cherries on the bat ?

This is great!  We're going to feature this blog!

A batty idea for a commission but I think you've knocked it for six. Great job.

Started by Silent Jim in Fests and Concerts: Organizing and Promoting. Last reply by Uncle John 12 hours ago. 10 Replies 4 Likes

KOOL DOG HOOCH replied to KOOL DOG HOOCH's discussion Building a micro shop for the work area challenged!!
"Lol That means I'd have to drag the washer outside and do a load of laundry while running the…"
4 hours ago

Doug Krantz replied to KOOL DOG HOOCH's discussion Building a micro shop for the work area challenged!!
"could run a pony belt off the washer to power the sander"
5 hours ago