In 2018, I received my first CB Gitty kit as a Christmas present. A few of my family members banded together and bought me the 3-string Tin Pan Alley kit. After completing it, I posted a blog entry detailing the build and it was later featured in one of the Cigar Box Nation newsletters. I finished the guitar with a flame paint job and added a pickup/pot/jack to transform the acoustic kit into an electric instrument. It was my first guitar built from a kit and I found it fairly intuitive to assemble. I would say the hardest part was notching the neck because you must create two notches of different depths, one for the wooden box top and a second for the paint can lid.

The Tin Pan Alley has a resonant banjo-like tone and projects really well. The 25” scale is a bit long for my taste but it’s still quite easy to play. Overall, I was extremely satisfied with the finished product and it has been used in many of my videos. My Tin Pan Alley is a unique instrument that sounds good plugged-in or unplugged. One of my favorite videos featuring this guitar is a cover of Paul Simon’s Slid Slidin’ Away.

This past summer, my family surprised me again with an awesome birthday present, the CB Gitty 4-string Mountain Tenor kit. I chose to finish the neck, back, and sides with a golden oak stain and I painted the top harvest orange. It’s a striking combination that looks almost as good as it sounds. Like the Tin Pan Alley, this kit was designed to be acoustic, but I decided to electrify it with a Deltabucker pickup. The combination works really well and resulted in a very versatile instrument. I changed out the acoustic strings it came with for electric strings, but other than that, it was a fairly straightforward project.

Of the three Gitty kits I’ve completed to date, the Mountain Tenor is by far the loudest and most guitar-like. With a very playable 23” scale, it has become my “go to” instrument for cigar box guitar videos. It has appeared in many of the more popular videos on my Cigar Box Nation page. Among them is a cover of the 1985 Bellamy Brothers tune Old Hippie.

I should probably also mention the Mountain Tenor went with me to York, Pennsylvania this past August for the Pennsylvania Cigar Box Guitar Festival. This was the gathering that set the Guinness World Record was set for the largest cigar box guitar ensemble. That was an incredible experience and I even wrote a blog entry about it. What a crazy day that was!

I guess that brings us to my third CB Gitty kit, which I received as a gift during the 2019 Christmas season. It is the super cool Hobo Fiddle kit, made famous by Ben Baker on the Gitty Gang Show. I completed this one very recently and was very impressed with the sound and playability. I painted and stained the two previous kits, but decided to finish this one with Danish Oil. Like the other kits, this was designed to be an acoustic instrument, but I added a piezo disc so I could amplify it when needed. Hmmm… I’m starting to spot a pattern.

This nylon-stringed instrument is by far, the quietest of the 3. However, what the Hobo Fiddle lacks in volume, it makes up for in mojo. With a 17” scale, this little baby is really a blast to play. I like it a lot more than I thought I would. My recent video covering Mobile Line is one of my favorites to date and it was made possible by the Hobo Fiddle.

I’ve heard some people say that building a CBG kit is much less personal than building one from your own materials. As someone who has done both, I’m not sure I’d agree with that statement. These kits offer a lot of room for customization and finishing touches. Granted, the pre-made fretboards save a lot of time over doing it the traditional way, but the rest of the process is quite similar. A kit may seem less daunting to a beginner, but assembling one still requires the same skills. The real advantage of that kits is that all the materials come in a single box. You don’t need to hunt down tuners, strings, braces, etc. The disadvantage is the materials have all been pre-chosen for you. So if you like to select unique parts that have a particular aesthetic or a sentimental value, a kit might not be as gratifying to build. However, if you like to start with a basic design and modify it to suit your style, these kits are right up your alley.

You’re probably wondering which one is my favorite, but I don’t know if I could choose. They’re each great in their own way. What’s more, they’re all one-of-a-kind instruments. Each one is not only a product of CB Gitty’s vision, but also a reflection of my personality as a builder. At the end of the day, a cigar box guitar is a captivating instrument whether it came from a kit or not. 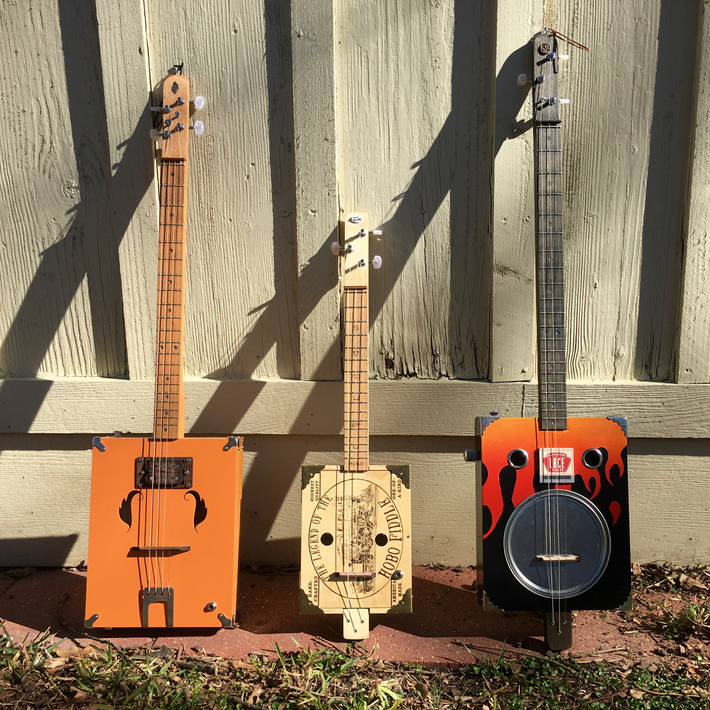 Aw gee thanks Glenn. I certainly enjoy the kits (both building and playing). I thought you might want this for Watt Corner but I know you get a lot of submissions so use it as needed. Thanks again. 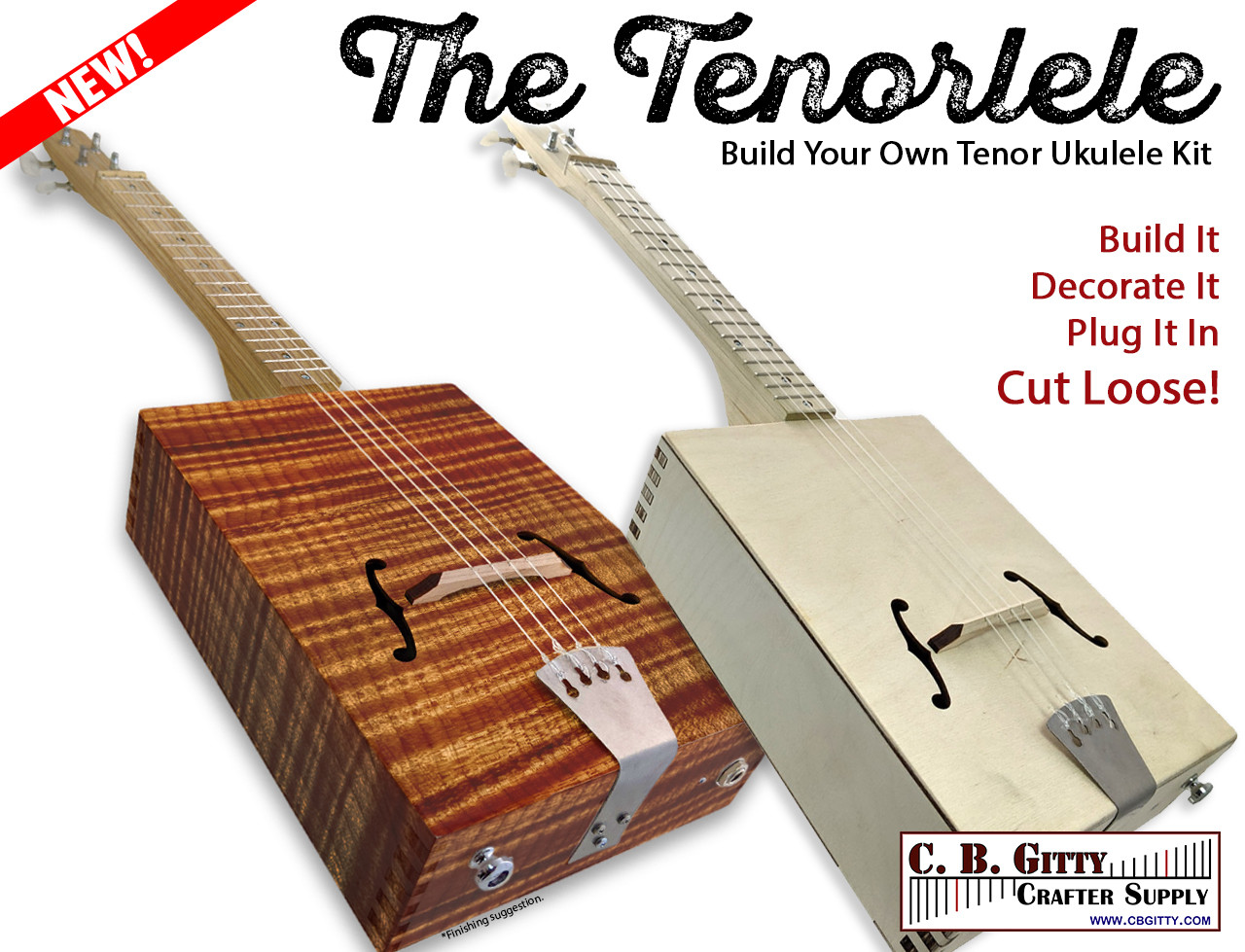 "Love how you put the knobs just above the "Punch" logos. Nice looking build! Can we hear…"
5 hours ago

" Ah now Walker, that's funny no matter who looks at it. "
7 hours ago

"I was wondering if anyone would notice the reference to Spinal Tap."
9 hours ago

"It sure is great to be outdoors again. The dirt is so dark and cool and full of life’s…"
9 hours ago

"Thanks Doug, Uncle John, AGP. It makes good use of worn out gears. A nice discovery. I used marker…"
9 hours ago

"Nice touch on the controls! Very iconic!"
11 hours ago

"I agree; great box and size! Clean and sharp looking build!!!"
11 hours ago