I was never really happy with it: the box I had made (out of 6mm ply and 3mm sapele for the soundboard) was big and a bit unwieldy, I had also originally intended to have only 9 holes on either side but unfortunately a beer and drill related accident meant I had to add more to make it symmetrical.

I also had a couple of problems with this guitar - the neck was not secured well enough to the box and there was some uplift on the neck. Not a bow in the wood as such, but it was making the action uncomfortably high. I also managed to leave it leaned against an external wall in very cold wet weather, and the damp made the soundboard all spongy and raised the grain on the neck. You could say I had some bad luck with this build.

I worked on a couple of other projects for a while and came back to this one, with the intention to rebuild the box. I started by making a pickup for it: 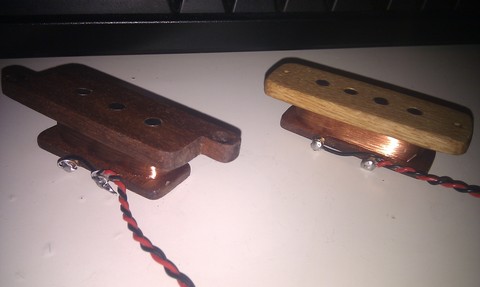 Well, I made a couple of pickups... the one on the right is obviously the one for the 4 stringer. I used a scrap of oak from the fretboard for the top of the bobbin. 6400 wines of 42AWG and alnico 5 magnets. I was going for a nice mellow tone on this one so I didn't want to overwind.

I had a couple of pre-made plain craft boxes left over so I planned to use on of those. The only problem is they don't sound good (very thick lid etc). I planed off the original lid and made a new one out of the same solid sapele stock I used for the original. I used a bit of Rustin's walnut stain on the box to make it look a bit more interesting. This pic shows the underside of the soundboard. I glued two 100mm strips together and used 5x6.5mm spruce strips for the bracing. The hole at the top is for the pickup. I added a scrap of 6.5mm thick sapele to act as extra support under the bridge to counter the extra tension of 4 strings.

I glued the new lid on, attached the neck (very securely) to the bottom of the box and finished everything with a few coats of Danish oil. 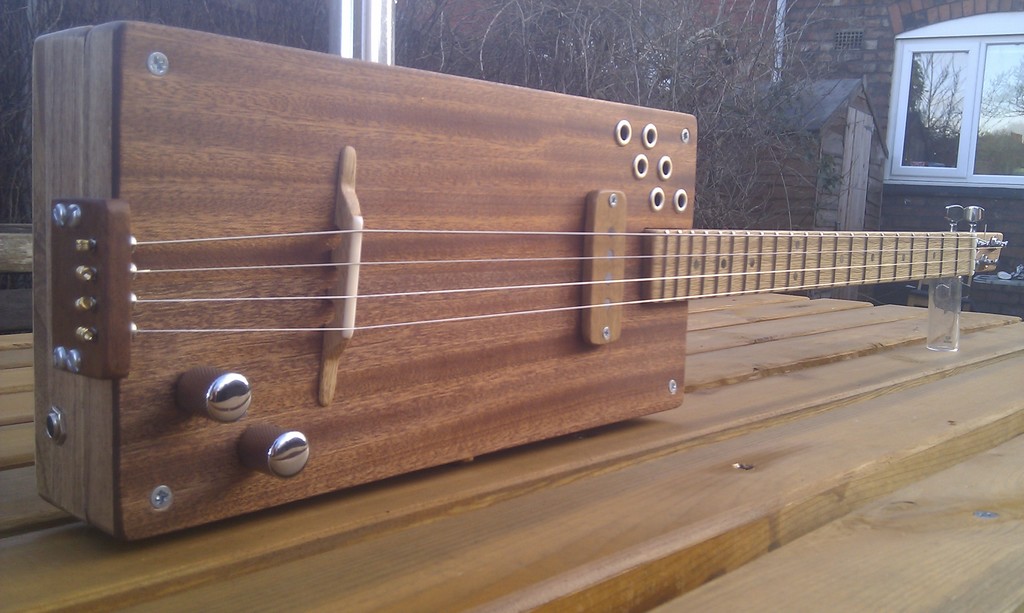 Sound holes - just 6 this time, I used 6mm inside diameter grommets from a leather craft supplier on eBay. You might notice the magnets are a bit wonky on the pickup. Not intentional! Sounds fine though. 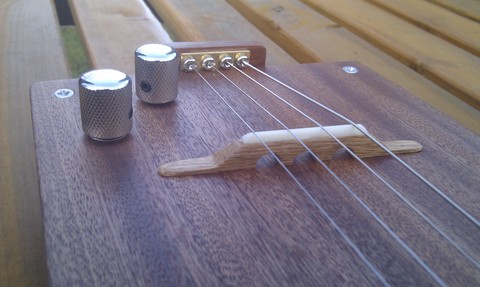 The bridge is made from a scrap of oak from the fretboard and a tiny strip of bone from a guitar saddle blank (I get 4 CBG bridges from one blank). I just use a drill to make the bridge 'arches' and sand it to a point. Volume (A250k) and tone (B250K) control with a .047uF Sprague Orange Drop capacitor. The tailpiece is a bit of sapele with a piece of brass sheet glued to it. The string ferrules are bike spoke nipples. The copper plate is connected to the ground on the back of the volume pot. I loved working with sapele for this neck. Compared to oak it cuts like butter with a spokeshave and smells lovely. I'll definitely order some next time!

To make this headstock I cut a section out of the top of the neck blank and glued it to the bottom, then shaped it with rasps and sandpaper.

That's it. Now I can get back to playing it!

Keep Your Hands to Yourself (Georgia Satellites)

"Nice one Andries!  Cool tune!  When you hit the ground, you won't fall any…"
10 minutes ago

"Lovely tune Unc J! Neat chord switch too! (your secret's safe with everyone who's…"
17 minutes ago

"Thanks Doug . this thing really sounds like church bells .  have a listen to the vid on the…"
5 hours ago