First up is What Is It?

1 string cigar box guitar, psychotronic strumbox, and the voice of The Wolf?

Next up is Knoxville Girl…

The way we were.

A normal tea time kitchen when I was a kid just not that long ago. 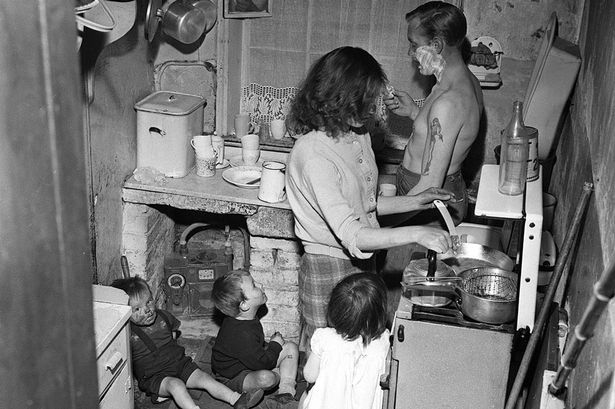 This was how it was 50 odd years ago in the UK when I was a kid, yes I had a black face like that after playing on pit stacks and bomb sites, can anyone see something familiar?

After just over a year of drooling, got me a 3 String.

Just over a year ago I had the luck to see Markus James (an awesome blues player) play a few tunes on a cigar box guitar at the Vancouver Island Musicfest 2012. I have been drooling over the sound since and I have been looking into building or purchasing one (nearest ones I could find were in Vancouver BC). Well, at this years festival lo and behold, the owner of Hard Times Musical Instruments was demoing a few that he had built and in fact, he was actually building one at the festival for…

Just came home from Afghanistan and got my Cigar Box Guitar!  What a great welcome home present!  Thanks again!  Steve

Just came home from Afghanistan and got my Cigar Box Guitar!  What a great welcome home present!  Thanks again!  Steve

maybe its been done?

it would be nice if somebody would make a poster of different f holes for cbg makers so we can stencil a certain style on !!!

Or has it been done?

Not done, but ready to play.  Sorry about the paucity of pics. I built this one with a 20" scale length so the lower frets would be closer together, make it easier to play with my little stubby fingers.

$30. build at the fest and played in this song!

My friend Scott Stubblefield bought an electric CBG kit for $30. at the June St. Louis  CBG festival 2013. He did this recording directly through a Vox Mini amp plug, fed into the computer and mix using a free program. $30. 3 string CBG kit! It impressed me what one can do on a budget.

One single coil and a piezo for that electric and acouctic sound, but I am in a dilema.  HOW TO USE THIS SWITCH IN THIS DIAGRAM FROM TED CROCKER?…

Thanks for you response

Having trouble hooking up volume pot for piezo disk or rod.  What is the secret? certain value pot, need a cap. what?

Here's a link to my YouTube video about my first build "King of Hearts".

Wandering in a vast forest

Wandering in a vast forest late at night with only a faint candle to light my way, a stranger appears and says, "Why haven't you been building cigar box guitars?"

Well, all my answers are lame, so I'll just say that I'm building again and that I'm making some changes and hopefully will have some photos to post very soon.  I'm doing my very first 3 string on a box I made.

I have some local musicians playing my guitars and people wanting me to make them something, so hopefully…

Launching a build on CBG #2. This one will have a 20" (506mm) scale length. I'm going to cut away (relieve) a significant portion of the neck behind the box top in an attempt to allow the top to resonate better, a la Shane Speal's "Dado Blade" video, but I'll use a router, 'cause that's what I have.
It's a pretty fancy box. I didn't take any pics tonight but I'll get some.

Ten winners are chosen by the editors of the Martha Stewart Living magazine and are given American Made Awards. Additionally, six winners are voted on by the audience in unique categories with one grand prize winner who will get $10,000. The winners will be invited to showcase their goods at the American Made Workshop in New York City’s Grand Central Terminal Vanderbilt Hall on…

Started by the anonymous pick in Performances, How to Play, Lessons, Concerts. Last reply by Uncle John 3 minutes ago. 5 Replies 0 Likes

Uncle John replied to the anonymous pick's discussion Update on cbn member “ Maddog “ .
"Guys, I did not know Janet well, but think it would be good to tell you a bit about her and…"
2 minutes ago