So....after a couple weeks of navel gazing, staring at goats, etc, plans and methods started to coalesce. On top of that, add the work stress of Fleet Week in San Pedro, 6 Navy and Coast Guard ships many 10's of thousands of visitors, and many of them coming on the battleship. Cheap Trick concert, a Sea Hawk chopper in the parking lot, a couple tanks, a 155 cannon, and fatigue. Lots of fatigue.

My first plan had been to build per Shane's plan, but the more I stared, the more I wanted a bit more sophistication, as a challenge to me, not that there's anything wrong with the 2X4 plan.

So this build is in fact, lap steel #2, getting built before #1. I'm still going to produce a 2X4 per plan, but one of the main things I wanted different was the size of the lumber. I was having fitment problems with 2x4, so I moved to 2x6. Much better and easier. More room.

So tonight I came home and dove right  in. This pic is tonight's work, lots of layout, and 2 cavities created. Nothing is assembled, but this shows basic arrangement. The jack will go on the face of the butt end, the cavity cover is from a conduit corner box. The pots will be mounted on it.

I've kept the scale the same, but stretched the body to 36", all of that (or most of it) on the butt end, all the other dimensions are the same as plan.

My bridge/saddle setup is (I think) non-standard, a hardtail bridge, but with the 1/2" all thread saddle, mainly because I did not at all like the thru-body setup but wanted to maintain the solid 23" scale...it's all a learning process after all.

What I want to ask is how critical is the distance between the hardtail and all thread? The plan sets the all thread 1.5" back from the thru-body holes. Right now I have the hardtail about 1" farther towards the butt (that's the little saddles of the bridge fully extended, to the all-thread, a total of 2.5"). The pencil represents the all-thread.

Since I don't have a clue as to what I'm doing, I am trying to avoid making nice looking firewood.... 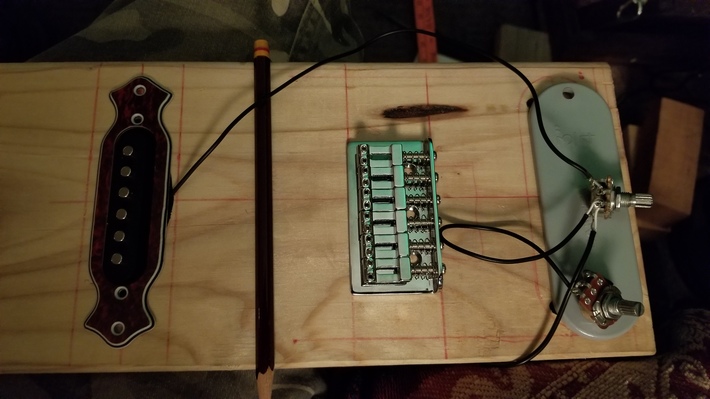 First what is "all thread"? The bridge is set up so each string can be set to intonation. Meaning there has to be room for the saddles to go backwards or forwards if needed. You'll end up with a line up being closer on the high side and farther away on the low. With a break in the line at the third string. It's usually farther back than the second and fourth. 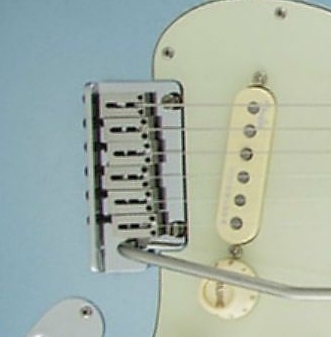 Bridge on an American Standard Fender Strat for refference.

do you mean that the allthread is the NUT ? because your hardtail bridge already has "saddles" individually adjustable for height and intonation.   If you ar putting a 1/2" all thread in front of this bridge then you negate the adjustments this bridge offers..

re reading you post again i see the problem. with this hardtail bridge you do not use the all thread. the saddles where the 2 small alen screws are , they should be where the allthread would have been.  then its the 23"scale from these saddles to the nut.

@cause the blue rat   all thread is a rod that has threads cut in it all the way top to bottom..  just a giant bolt with no head..

Thanks Timothy. Around here we call em threaded rods. Looks like both names work.

we do too in Australia but in watching you tube all over the world i have picked up a few things..lol

Here's what I don't understand... with the hardtail bridge, does not the VSL change on different strings?  I thought VSL was pretty much inviolate....

in theory yes. but in practice strings have mass and thickness and tension differences so you have to slightly adjust the vibrating length to compensate. thats why on rats picture of a strat bridge , the saddels are slightly different.

I don’t understand, are you using both? Or are you asking how far back the bridge should be placed? 23” from the nut, right? Maybe you should have built #1 first & then added your changes to #2 after, it’s very easy to get ahead of yourself on a build, especially the first? Good luck with this

I've worked on guitars for years. I have no idea what VSL is.

Picture the inside of a piano or a harp. Each string has a different length depending on the note. There's no need tune to the strings harmonics. On a guitar or any other fingered instrument you are changing the string length to make notes. These means the tension of the sting has to be tuned so it's harmonics mach up to the frets. The bridge is used to mach the strings harmonics to the fret placement. That way when you play an open A and a fretted A they well be in tune with each other. No matter what string your pressing to play that second A.

So in truth A 25.5 inch scale ends up being slightly longer or shorter than 25 inches.

This is all so new....I think VSL is "Vibrating String Length".

Well crap. Back to square one. Split wood on a long 1" hole.

Not too upset. It's only a couple hours lost.

Really going back to square one. Back to 2X4, and about 90% of the original plan. Sequence is now being sorted out. Sequence can be important.

I don't think you need to go back to the drawing board at all. Just make it work. The important thing is to have 23" between the nut and the bridge. If you need to move one or the other to achieve this, it shouldn't be too hard.

Hey James. I was thinking about this as I was laying in bed this morning. I wouldn't scrap the project at all. You could either 1) move the bridge and adjust the height so it matches the nut or 2) you could just go with your original plan. Use the bridge as a tailpiece and the threaded rod for a bridge. There's no reason that wouldn't work.

If it was me, I'd remove the saddles/springs/screws from the bridge assembly so it was essentially a angled bracket with 6 holes (save the saddles for a late project, there are ways to use them without the base plate). Thread the strings through the bridge, up over the threaded rod, and all the way down to the tuners. Basically, follow your original plan. That would actually work pretty well and it think it will look cool when you're done.

I like the way you took advantage of the extra space on the 2x6 and used the pickup ring. That looks cool. And the idea to use the conduit box for a control plate was genius. I say follow your plan brother!

Started by Shane Speal shanespeal.com in Feature Articles. Last reply by Jon 1 hour ago. 1 Reply 1 Like

Started by the anonymous pick in Performances, How to Play, Lessons, Concerts. Last reply by Downtown Vinnie 11 hours ago. 22 Replies 0 Likes

"Wow, you made a winner there.  Glad is sounds do good.  That nut placement has to be a…"
8 minutes ago

"Great cover Poorness. That bass sounds super! Such a shame about Chris, still hurts."
15 minutes ago

"Those kind of lack depth, but are still really good boxes. Pretty too. Not you, Bob. The boxes."
15 minutes ago