I was on my way outa Harlan, pretty much at a loose end.I had thought to spend some time with my buddy, Uncle John, but just as I was walking up his driveway, a neighbour sitting on his porch told me that John was not home:

"He's away getting singing lesson, he wont be back for three days" he mumbled (having heard John sing, I was thinking three MONTHS per lesson would be preferable!)

Anyhoo, as I said above, I was on my way outa town, heading in no particular direction. At times I just liked to drive out to nowhere, something, I guess, akin to a mystery tour.

The sun was pretty strong, guess I'd driven about 120 miles, with no idea where I was. Suddenly, in the distance, I was aware of what appeared to be a small group of people, gathering on the outskirts of what I presumed to be an old bygone town, (or a ghost town, as some folks would say). As I got nearer , I pulled over.

There were three guys and a woman; one guy was holding an old beat up guitar.

"Naw", he replied I just brought it to blend in with the story of the guy writing this! (this made some kinda sense, not much, but I did not dwell on it).

Anyhoo, I soon heard the whole story of why this small group of folks was gathered on the outskirts of a deserted old town:

Seems that Jimmy Chang, an old refugee from China, had a store there; selling gunpowder mainly, to the miners. But he also sold fireworks to the local kids. His store had a sign that was 20 feet tall, and glistened in the almost continuous desert sunshine.

Seems that these four good folks were here to remeber Jimmy, on the anniversary of the day that his store blew up (luckily, that happened one early weekned morning, and only Jimmy was in when it blew.) There wasn't much to bury, I was told; even the famous sign had been blown into a thousand pieces!

Suddenly, the four folks surprised me by all getting up as one, dancing, and singing in Chinese. This lasted about 2 minutes, then they all sat down, holding hands and looking mournful. I let them sit in quiet contemplation; I had not much more to say anyway. (20 foot signs, gunpowder, and an old man from China had not that much interest for me).

After another few minutes, I decided to drive on. Before I did, I walked up to the folks, and asked how often they had this commemoration of Mr Chang "Every Saturday", came the reply. "Even though we all gotta come miles from all over the country now"!

"That's amazing" I said. But why do you NEED to do this little commemoration, especially every week"?!

They all answered in unison : "for the sake of old Chang's sign"!

In case it wasn't clear. this link explains it all

Kinda reminds me of this song by Allen Sherman

Lol Clock. Btw , for a second, thought that was me on right, in the shorts :) 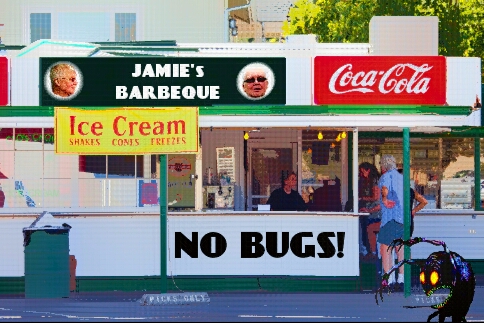 Started by Uncle John in Other stuff - off topic, fun stuff, whatever. Last reply by smilingdog1 8 hours ago. 59 Replies 11 Likes

"You'd enjoy Hwy61roadhouse these days. The club meets every 3rd Saturday of each month from…"
1 hour ago

In process for about 6 months, actually started before I reverted to CBG's. I think you can see…See More
2 hours ago
0 Comments 0 Likes

"That is amazing AGP! I’m reworking my music room to try to get things under control. The…"
2 hours ago

"It was a great weather day. Thanks BrianQ, we were at less than 50%. This was at end of day. Missed…"
2 hours ago