Guitars grow on the riverside

What does this rather tricky and ambiguous title mean? All will be revealed in a minute. Firstly, allow me to describe a spectacular musical instrument called the Kania*. This is a 17 inch cigar box guitar, with a neck made of linden tree wood and nut tree wood fretboard, all of which are attached to a Brazilian cigar box – Pequena Flor Bahia. Believe it or not, this cigar box is the only part of the guitar not linked with its place of origin- the Odra river.

“Odra Guitars” is a concept invented and brought to fruition by Michał Zygmunt, a polish guitar player as well as a composer of contemporary acoustic guitar music. Check this Making instruments from wood that is available regionally, in this case from the Odra's river banks, is the main goal of the whole project. Michal Zygmunt has decided to prove that professional guitars can be built by using local materials. This is why, apart from the aforementioned Kania, there are two more instruments being made. Both are of the unique variety; an electric resonator guitar called the Karina and a baritone electric guitar called the Odra. In their construction, a luthier - Mirek Fejcho from lootnick.com, used only wood from Odra river. The results of his work are simply astonishing.

This precious electric dobro - style “spider” resonator is fitted in a shallow body that generates a smooth sound when heard on big stages (using a tube overdrive) which also allows for acoustic play with the use of a mircophone.

The concert-type Odra guitar has a hollow-body 26.5 inches in scale, a Bigsby tremolo bar and TvJones Filter'Tons pickups. You can listen to the sound of this guitar particularly well on the cd of Punkt Eklektik Session vol.1 and vol.2 http://www.eklektiksession.com/index.php?page=home-2 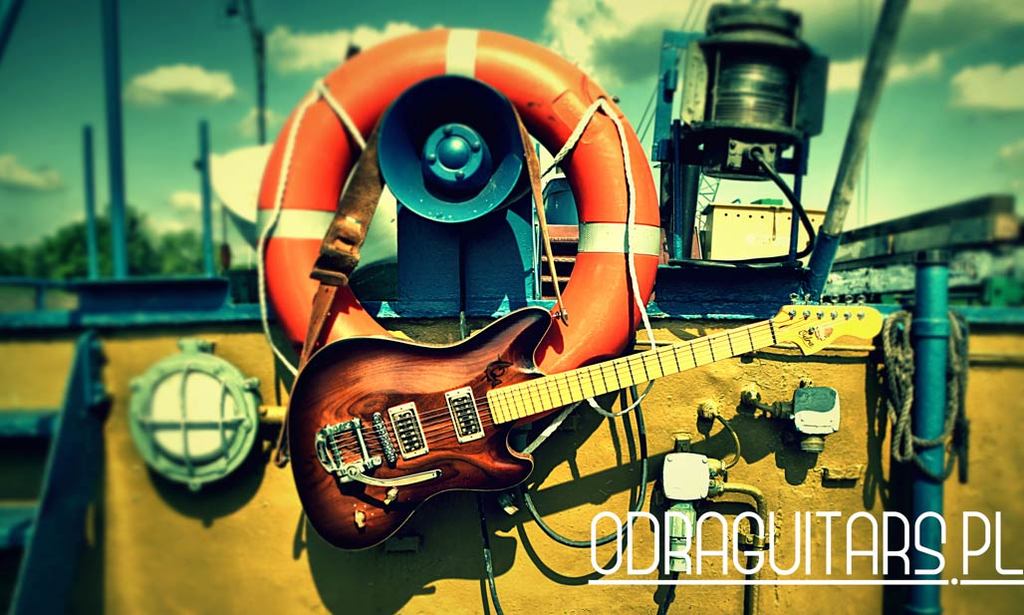 Now, let me go back to the cigar box. It is not a coincidence that this guitar has found its place among professional instruments such as the Karina and Odra. It proves that the idea of playing a musical instrument is at one's fingertips. It sets an example illustrating that anyone can built their own instrument and learn how to play it. It proves that everyone can find a joy in playing music and share this joy with others. It proves that it only takes a weekend to create an instrument and only few weeks to learn how to play. Moreover, each and every one of the cigar box designers admit that one benefits from an immense amount of satisfaction from a personally made instrument. This vibe we see in photos and videos from the workshops on cigarboxnation.com, as well as social networking sites YouTube and Facebook. The concept of the Odra Guitars is not merely another few words about local activities in the DIY movement, but an attempt to bring the construction of musical instruments in Lower Silesia to life – in turn bringing back the customs that Lower Silesia was previously famous for.

To learn more about Guitars grow on the riverside project go to: http://odraguitars.pl/

Great post, and look at how others worldwide are getting into DIY.

Started by Uncle John in Other stuff - off topic, fun stuff, whatever. Last reply by Anthony adams 5 hours ago. 63 Replies 12 Likes

Started by John Derrett in Performances, How to Play, Lessons, Concerts. Last reply by Ian Nolan 9 hours ago. 6 Replies 0 Likes

"UJ you gave me that skull about 5 years ago. Finally used it."
1 hour ago

"Very cool. One of the coolest diddleys ever."
2 hours ago

Mr Snow done a number of songs whit the fact that he is moving, Moving On, and just Moving, from one place to a other , this must be deu to the fact that as...
3 hours ago
2 Comments 2 Likes

Anthony adams replied to Uncle John's discussion Dave passed away on Friday AM, 9/17/21. Thanks for all the well-wishers before and after his passing.
5 hours ago

J.D. left a comment for Jim Morris
"Jim ,,,a man of many instruments! Amazing work my friend. Hope all's been well."
6 hours ago