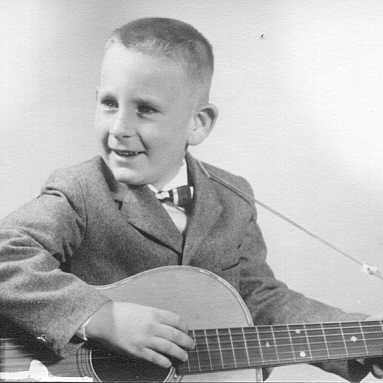 My story, and I'm stickin' to it

I'm Bear (aka Todd Treadway) even though I don't really resemble a bear. For one thing, I don't have much hair at this point. I used to build regular, nice, shiny electric guitars that no one wanted and I was afraid to ding up by actually playing. One day, a few years ago, I saw Richard Johnston playing his Lowebow at a local blues fest, and that, as they say, was all she wrote. I joined the Cigar Box Revolution that day and haven't looked back. A hundred or so instruments later, I'm still at it, and can't stop! Long live imperfection!

Hope ya like video, Todd . Did this vocal on ma 4 track, but deserves a better singer!  :)

Hey Bear, This is Walt The CBUkulele builder, I like you video music and impressed with your unique designs. Sounds great! Glad to be a part of this website.Working on another Uke of course cannot stop this feverish hobby, Ha. Will post pics later on, when I finish my  40 on record. Your added friend, Walt CBU Builder [:-)]===I=I

Thanks for the request and the kind words. I've been listening to your CBBanjo record, and it's just great music all around. Nice recording, too.

Thanks for your compliments...no, I don't play left handed, did I turn one of the videos around?? lol.  I have to tell you though, when I listen to your music, it is like magic and touches my heart. You are an amazing writer and musician, and I believe that you will be found someday...

I was just curious. You talked about the words "No text, how are you" in Broken Bird. Yes, that is correct. I was actually trying to make it current to today when i wrote that. I was thinking more of a modern bluesy country song, and did it on purpose. You did make me ponder, whether I should just change that line to "no sweet, how are you". Thanks for taking all the time to help analyze them too.

Bear! I got the chance to listen to all your music while I was writing this. Your music is amazing, I don't even know how to tell you how much I love it.. I don't mean just 1 or 2. ALL OF THEM. Such a pleasure to be able to listen and thanks again.

Thanks so much for taking the time to help. I will put your vote for cool cool water and Broken bird second...

How did you learn about Cigar Box Nation?
Ted Crocker

Started by Uncle John in Other stuff - off topic, fun stuff, whatever. Last reply by RTZGUITARS 50 minutes ago. 32 Replies 5 Likes

Tin Kazoo Shootout: US vs UK

For the final episode of Kazoo Fridays, I compare two classic tin kazoos, one from the UK and the other from the US. Both have been manufactured the same way...
42 minutes ago
0 Comments 0 Likes

RTZGUITARS replied to Uncle John's discussion Dave Lynas needs prayer and good thoughts and wishes
"Dave you are CBN's Folk Art Wizard. Your Art inspire me that not easy to do. Thank you for…"
50 minutes ago

"Thank you Doug and Steve!"
1 hour ago

Maddog replied to Uncle John's discussion Dave Lynas needs prayer and good thoughts and wishes
"Thanks for the update John. God Bless Dave and God Bless his Family. "
1 hour ago

Uncle John replied to Uncle John's discussion Dave Lynas needs prayer and good thoughts and wishes
"Friday AM.   Dave has not been awake for much of a day.  The family thinks the end…"
2 hours ago