...it's ok, i'm not losing my sanity, though one aspect of my builds has been a hard nut to crack - that is, the humble "nut" - the one you glue into the neck/headstock assembly, be it bolt, bone or wood, this little detail can adversely affect the sound of your guitar if you get it wrong, the devil is in the detail they say, and here i will pass on my findings surrounding the apparent mystery of this little gem.

I am not a production line builder, all my projects are one - offs, i don't build for clients, besides they would be horrified at some of the "correction" and "modification" scars all over my models, i build for sound but like to have a little fun with themes, ideas that come up to make them stand out from the crowd - so far i have tackled 10 or 11 or so of these, but the nut thing has never really worked out and has been a constant source of frustration and fiddling...until now!

I have always preferred BONE as the best material for a sturdy and responsive nut, i tried everything else but never been happy with the result, it's easy to shape, sand and cut, but brittle - that is it's "strength", revealing every little nuance between string and neck, the problem was getting the string slots exactly the right width for each string so as to avoid that Sitar-like signature buzzy whine sound that means the string is rattling around in a badly cut slot!

As proper Luthier tools are unbelievably exclusive and expensive i used all sorts of saws to try and cut the slots - all ending up needing bits of paper to stop the buzz and losing some sensitivity  in the process, i even tried some "special" files designed for other applications but they were always too thick or floppy. After wasting another afternoon's recording messing about with curing buzzies i later found an interesting item on ebay, namely  " Axemasters Guitar Nut Slot File Set Kit" from the U.S.A. - this little kit includes a set of small round rigid files perfectly sized to cut string slots, each to be placed in a mini-fret saw... 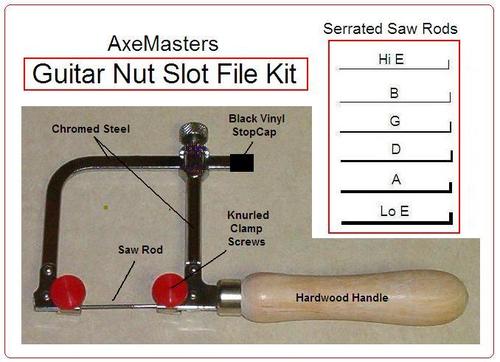 This little kit seemed worth investigating, i found they did a set of saw bits seperately so bought this, and finding an ordinary adjustable Jeweller's Fret Saw, much cheaper, to fit them in... 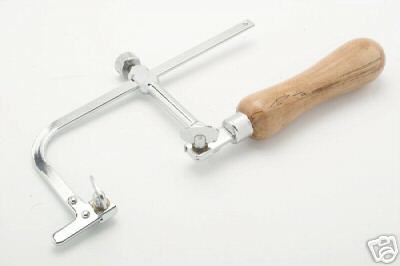 I received the saw bits in just over a week, they fitted into the Jeweller's saw perfectly but three of them seemed a little too big for my Super Slinkys, i use 32-24-16-11 for my builds, the three thinnest saw rods seemed the most suitable so i experimented with a spare bit of nut and the results were very encouraging - perfectly round and evenly cut slots! I brought three of my guitars down for surgery, tapping off the old nut on each and installing the new cut-to-size blanks, i adapted my bench vice with wooden buffers to hold the blanks in position while i cut the slots, lightly scoring with a triangular needle file first. I cut each slot according to string size, trying not to make the slots too deep - i remember some esteemed Luthier writing that low strings should sit "on" the nut and high thin strings should sit "in" the nut.

Anyway i glued the new nut in place using superglue (aaaaggh! ...i almost hear the CBG Cognoscenti cringing..but it works! ), replaced the strings and...Bingo!....perfectly balanced strings with no buzz whatsoever! I finished the other two guitars and after much testing decided this would be the way to "do my nut" in future, after i've adjusted my other builds of course! (-:

The files cost about 10 GBP plus postage, the Jewellers Fret Saw 6.49 GBP. 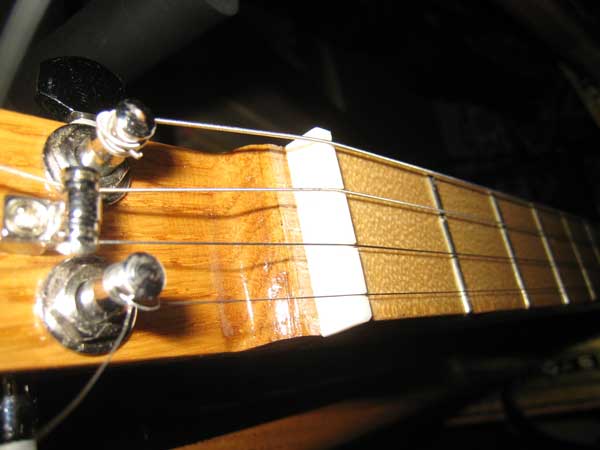 Thanks for sharing.  I was looking at that set a while back.  Thanks to you, I now know what to do about it.

Is this a great forum or what?

Thanks guys, still can't believe how easily this came together...! (-:

Permalink Reply by Wichita Sam on April 30, 2012 at 1:28pm
Thanks for the info. I've found corian to work easier than bone but has most of its good characteristics. If slots are round bottomed and not V shaped most all buzzing will be eliminate. At least thats what 300+ builds tell me the best.. Wichita Sam

Cutting Fret Slots on a Bandsaw?

Started by Turkeychicken. Last reply by PhilUSAFRet Mar 29, 2012. 2 Replies 1 Like

Anyone use the stewmac dragon rasp?

- Letters from Heaven - Memorial for Dave

Steve Bookout commented on Steve Bookout's blog post Bookie's Poor Man's Dobro
"John, it's only fantastic because I use you for inspiration!"
1 hour ago

Taffy Evans replied to Lark Leazar's discussion First build
"Hi Lane, thanks for the comment. I've posted a "how to do it" on here. Taff"
7 hours ago

"It would be a real treat to hangout and play a few songs together! Maybe the scheduling will be…"
7 hours ago

"Dave’s inspiration lives on! Thanks for sharing John; the mantle is yours."
7 hours ago

"Those look great!"
7 hours ago

"Twins with different birthmarks! Simple and stylish CLG. I like them."
7 hours ago