Now, as I was working this morning on my current build, a 4 string Undercrown Acoustic, it occurred to me that this isn't no longer a Cigar Box Guitar. I've gone so far beyond the event horizon that even I can no longer deny the fact. I'm in a new, abeit mostly uncharted, unexplored paradigm. Certainly, a cigar box is involved, but the instruments that many of us are working on today have evolved so far from it's humble roots that they would not be recognizable, tone wise to a player walking the dirt road outside of the Dockery Plantation. There was a certain primitive grunge, created by those first hand made instruments born out of poverty & desire. These folks were not professional in their quality, they were not custom winding pickups, or using exotic tone woods. They were not even splitting hairs about the intonation of their fretwork, or their string action. They were simply making noise and having fun. I'm probably one of the most guilty of this grievous sin. I have pursued the Phantom of "Tone" for far too long. It's an exercise in futility my friends, for what you seek is not found in the humble cigar box. Your "Rat Rod" T-bucket may go very fast, sound loud, and smoke the tires, but... even though it has the outer body of a Model-T Ford, it will never drive, sound, or even look like a Model-T Ford. 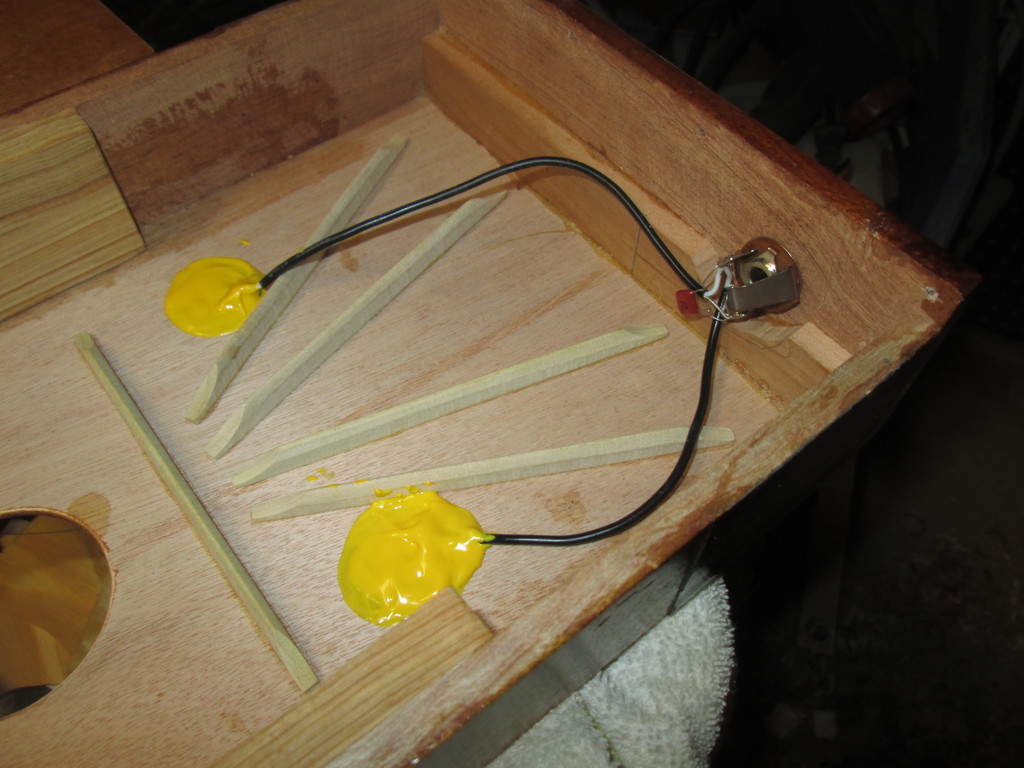 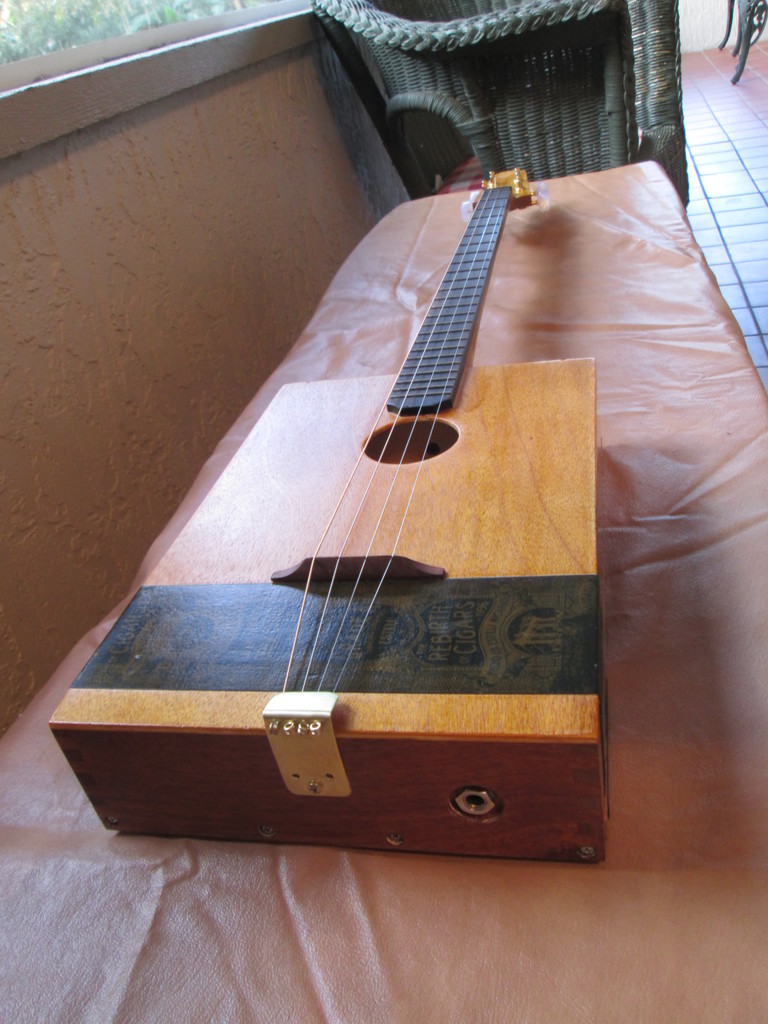 Is that a 10 or almost 12 inch box? Bit of honey tone stain, or is that clear coated? Very pretty. Like how you kept / preserved the back label too. Makes me want to build one, so I know I like it.

The finish is the natural wood, sanded to 1200 grit, and hand rubbed Amber Shellac, my own "house blend". After 6 coats of shellac I polished the box with (1500 - 120k) micro mesh and Renaissance Wax.

Like I said, this is far from it's humble origins.

All points made are valid and I agree, but today would dictate more usability and better build quality from the current crop of CBG'ers. Taking that in to consideration and using your Model-T as an example, if you owned a Model-T I dare say it wouldn't see the road that often if it was in a totally original condition and I dare say if you happened to find a proven 1920's functioning CBG in a barn it too would be on display and rarely played if ever.
So with that said, I see today's CBG's as an artists expression/interpretation over function - I'm not saying they don't function as they should, it's just a term of use.

Fortunately, I have made both, and plenty of both, to know the truth. Sure, frets can be tricky for the inexperienced. But the learning curve is very short. Besides, "traditional" CBG's didn't have frets, so they are not necessary. Cutting a pair of rectangular openings on the cigar box ends to install the neck is basic CBG 101...whether or not the neck touches the inside of the box lid. And then the tricky part...how to set the stove bolt nut & bridge.

In comparison, figuring out how to properly install a factory 6 string neck on a cigar box takes a bit more consideration, planning, and execution for success. The least of worry is that one needs a sizable cigar box, where as a "traditional" build can be done with any size box.

Add to the challenge a six string bridge, requiring a solid anchor point, spot-on center-line alignment so string orientation is correct, and installed at a distance relative to scale so you can actually dial in the intonation before running out of adjustment space on the saddles. And let's not forget adjusting relief/action on the neck..aka the truss rod.

Look, when it comes down to it, all of us here started at zero. We asked the same questions back then that new members ask today, and will ask tomorrow. We got excited when we finished our first cbg, eagerly posting photos of every angle possible, often without any description of what we were showing the others. And then we made another, and another. For many of us, a natural form of creative evolution happened. And others felt more comfortable maintaining a more "traditional" approach to his or her craft.

Neither one is better than the other. All styles of guitar building deserve equal merit and respect. And when a member puts it on the line and does something traditional or non-traditional, the last thing needed is blind rhetoric.

It used to be that way. I miss those times. It would be nice to have that back.

Couldn't agree more Scott,at times we become very inward looking,re hash and categorise ourselves,different tastes,varied skill sets,access to different materials etc means pigeon holing is sort of meaningless,if not impossible.some of the most interesting stuff i see here,didn't quite work,but inspires others to expand on it and improve it,which i imagine was the original catalyst for the group starting,ie,sharing, improving and developing ideas It's a good idea now and then to go back through some of the early guy's pictures,their legacies are seen daily in the new stuff,and to me that is a great part of this site.

Correct, and also the possibility of returning to those roots. Builds with no budgets and no modern electronics. Purely acoustic...

I guess, what I'm saying is that I'm getting the feeling that I'm possibly going in the wrong direction with my builds. With every other category of Folk instrument, I'm focused on the old traditional ways, and yet, with Cigar Box Guitars, I'm finding myself chasing that old "phantom" called Tone, piling on the electronics, the tricked out wiring, the specialty amps, the pedals.... just like the 6 string guys do.... just I'm using a cigar box instead of a 2" basswood slab. These last two builds, my Arturo Acoustic & Undercrown Acoustic have reminded me that "Back in the Day", there wasn't any fancy electrical gizmos. They built to be acoustic, and they didn't buy anything unless it was absolutely necessary, like strings. These were instruments of the Blues! They were born of Depression, Poverty, and Hardship. They didn't have a budget to build anything, yet they got it done. I'm hearing the calling, but I'm wondering, have I gone too far?

No,i don't think so Greg,improving the 'tone',or sound is only a  natural response,once you make a few,particularly accoustics,electrics are, by their very evolution a step away from traditional c b g's,so there's no real tradition to maintain,so you're free to chase the dragon i'd say.Also,i reckon 'traditional' builders would most likely have only built 1,until it broke or something,then maybe another.Must remember as well,internet speeds in Tutweiler in the 20's would have been pretty slow,so they couldn't access info like we can now

All that I'm suggesting is that after these last two builds, I'm feeling that I've been headed the wrong direction. It's time to put away the soldering iron and focus upon old school pure acoustic builds. Minimal budget "Barn Found" style relic builds. Pure acoustic tones, fully functional, and timeless.Sure, you wouldn't want to play a century old vintage instrument, but what if it only looked old? A fully playable "Museum Replica" build.. 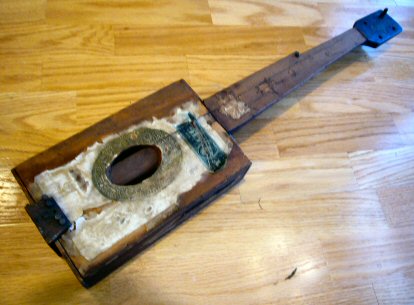 Started by Jack Gray in Performances, How to Play, Lessons, Concerts 3 hours ago. 0 Replies 0 Likes

Hello, anyone in the Fayetteville, NC area building CBG’s?other than me. Thanks……..JackSee More
3 hours ago
0 Comments 0 Likes

BrianQ. left a comment for Jimbo
"Welcome, check out the Resources tab for build/play info and join some groups located in the Posts…"
4 hours ago

Something you whish for but dont allways meet, usely they are Dragons who try to suck you dry ,or mentaly hurt you by loving you not for what you are ,or do...
6 hours ago
2 Comments 1 Like

"yes lots of kids come here and my site!"
7 hours ago

"Nice job Mr. Pick. Looks like someone built it down in the mining camp."
7 hours ago

"Good one, I used to look forward to reading the Far side in the Sunday paper :)"
7 hours ago

""Thanks UJ", Yep!, slowly getting the hang of it, should have it down pat after another…"
9 hours ago