Hey, y'all!  Your patience has been rewarded! The Townes Van Zandt CBG tribute album, called Goin' To Townes: A Cigar Box Guitar Tribute, which started as a mere idea here on CBN almost 4 months ago, is finally available for Download!

A double album's worth of Townes' songs interpreted by CBN Members from all over the world, including me here in Saudi Arabia, Thorsten Hinrichsen in Austria, Vinylhed in the UK, and people all over the US. Truly, a global effort! And all for free! 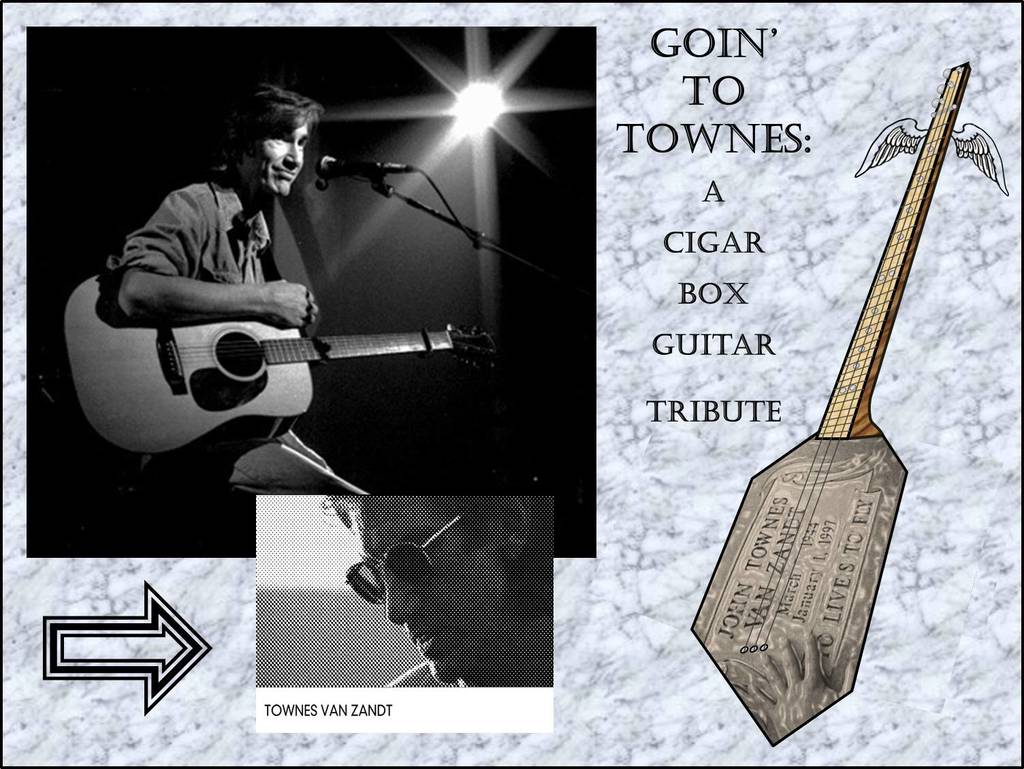 The zip file above has been updated to include Track 4, Dead Flowers, by Turkeychicken. Thanks to Dan Sleep for putting Track 4 in the updated zip file link above. If you are missing track 4 from the initial download file, please just download the zip file again. Sorry for the confusion.

I'd like to thank Ben Gitty for allowing us to host the album on the C.B. Gitty site, and for the opportunity to use CBN as a meeting place and idea exchange while we compiled the album.. I'd like to personally thank Dan SLeep for numerous e-mails back and forth, while we attempted to get the file from my computer in Saudi Arabia to the Gitty server, and then for him testing and birddogging the file for the last week or more. Thanks to John Maw in the UK for testing the download to make sure that it finally works.

I'd like to also thank Vinylhed (Hedley Brown), Uncle John (Bolton), turtlehead, SUGIMUGI (Thorsten Hinrichsen), RTZ, Jamie MacBLues, Russell Carlin, Cris Portillo, Jr., Ryan Sisco and the Crowne Towne Trio, Jimi Z, Ben Kepler, Letha Allen, Silent Jim, Lindo Cortez, Turkeychicken (Terry Chapel), and Jason Dean Anderson for contributing songs to this project, as well as the two Internet pickup bands put together for this project: The Profane Heaters (me, Vinylhed, his gf Louise, RTZ, Thorsten, Uncle John, turtlehead), and Uncle Ben's Perverted Rice (me, turtlehead, Thorsten, Vinylhed, and RTZ). This project benefited greatly from the dedicated mixing skills of Thorsten, Vinylhed and turtlehead. The album artwork was done by your's truly. Also included are lyrics to all of the songs in a Word document, in the order in which they appear on the track list, except Tecumseh Valley. This song appears twice, as Silent Jim and Letha Allen rendered two very different, but equally compelling, versions of the same song.

All songs were run through MP3Gain to equalize and normalize track volumes as much as possible, ue to the different recording hardware and software used by the various contributors. All tracks are in MP3 format, and have been tested on numerous computers, with both iTunes and Windows Media Player, on both Macs, iPads, and Windows PCs. Also, this album will be made available very soon for free download from MyTexasMusic.com, hosted by Lucky and Jinelle Boyd, who are thrilled to have this tribute album to promote Townes' music to new legions of fans. Lucky is a singer-songwriter himself, and knew Townes.

This has truly been a labor of love for me and my collaborators on this project. We had virtually no disagreements, respected one another's song choices and highly varied takes on them, and showed how the Internet can be used to fully collaborate on a project of this magnitude. I am proud to stand on my coffee table in my cowboy boots, and say that, while Townes Van Zandt may have been the greatest songwriter ever, the people who contributed to this project in ways large and small are certainly the best bunch of ne-er-do-wells one could ever hope to hoist a virtual beverage and a song chorus with!

Tip off the Cowboy Hat Ron. Your Texas size head should be a little bigger then normal, and for good reason. This is more than a bunch of covers, its homage to a real songwriting legend. Many of us can relate to Townes struggles in life and the ability to cope through music. Ay least thats my take. Thanks Again for your hard work and creative ideas they really turned into something speicial.

It wouldn't have been half the album I believe it to be without your input. And helping me to stay on task. And contributing some of the loveliest, sensitive tracks on the whole thing. Lemme buy you a drink, pard!

So, you gonna be ready for some Neil Young in a coupla months?

You bet Ron, I'll get out the factory git's and bass and some drum loops. I only put a few minute on the Townes songs do to health reason, but things are better now. Neil's acoustic songs to his rampaging Les Paul with the Bigsby with Crazy Horse is just made for the CBG and the people on this site. See you there.

Permalink Reply by Ron "Oily" Sprague on July 8, 2012 at 2:30pm
Man, I truly hope this music has been therapeutic for you, both physically and spiritually. Jeez,, if you only put a few minutes into your Townes efforts, I can only imagine what'll happen if you fully commit yourself! ;-)

Awesome on the NY! Yeah, I think subconsciously that's why I got the Swamp Witch: gotta hear the Witch ride The Horse!

Hi TVZ-Addicts out there... I want to say thank you to all who made this possible and especially my dearest applause to Ron for leading through the project. It was so much fun and challenge - and, by the way, I got much deeper into the Townes Van Zandt world what I'm really glad to have experienced. The variety of songs, voices, styles, sounds on this compilation is enormous.

Whenever there's another project going on ... count me in.

I'm very glad you started out this project with Nothin'. ;-)

Thank you so very much for your care and talent, at both playing and mixing. You were and are an amazing gift to us.

Uncle Ben's Perverted Rice needs to go on... We'll possibly do some collaboration work on Neil Young if you, Ron and all the others would join...

If you need to put the band back together, you'll find me playing the lounge bar at the Copacabana.

I have only listened to part of it so far, but I am impressed with the talent and the recording values that our members have used. This album sounds awesome!!

"You are right Kale! All I know about Nirvana is that they had a lefty guitarslinger. Adam you…"
39 minutes ago

"Thx, yes, I've never seen/heard it done prior and truly LOVE it!! All the goods from one pup,…"
1 hour ago