A method for grounding strings without metal bridge or tailpiece

The Some time ago I saw a video about grounding strings by running a wire to one of the eyelets used as string anchors, and using a metal saddle to get continuity to the remaining strings. It inspired me to ground all three strings at the bottom, with a ground wire buried inside the tail of the through neck. On my last build I ran three individual wires, which worked, but isn’t exactly what I’d call an elegant method. So this time the challenge became creating a single point ground for all the strings using one wire.

I started by drilling the tailstock holes for the eyelets (I’m using pop rivets, but Gitty long eyelets would work fine), then drilling an angled hole leading from the cut away portion of the neck where the box lid ends up, to meet one of the string holes in the tailpiece. Then from the side of the tailpiece, drilled another 1/8” hole horizontally,  connecting the three vertical string holes.  Then using a paper clip with a tiny hook bent into one end, I fished a stripped section of stranded wire that’d been twisted into a single neat cable, through the gallery created by these two extra holes, and twisted the wire around each of the three top string eyelets. The tail of the bare wire ends up under the box lid at the recess in the neck, and will get soldered to the ground wire on the pickup harness. The only visible evidence is the extra hole in the side of the tail of the neck, which I’ll simply plug with a pop rivet. Alternately it could be plugged with a 1/8” dowel.

Its a bit fiddley fishing the wire through the gallery and making the loops at each eyelet, but the result is a clean grounding system that is totally hidden, and works with the eyelet string anchors and doesn’t require a metal bridge or saddle.

Note the drill bit and rod in the photo are only there to indicate the holes drilled for the wire  I installed the pop rivets part way temporarily until after the neck is painted, then they’ll get replaced with nice clean ones. 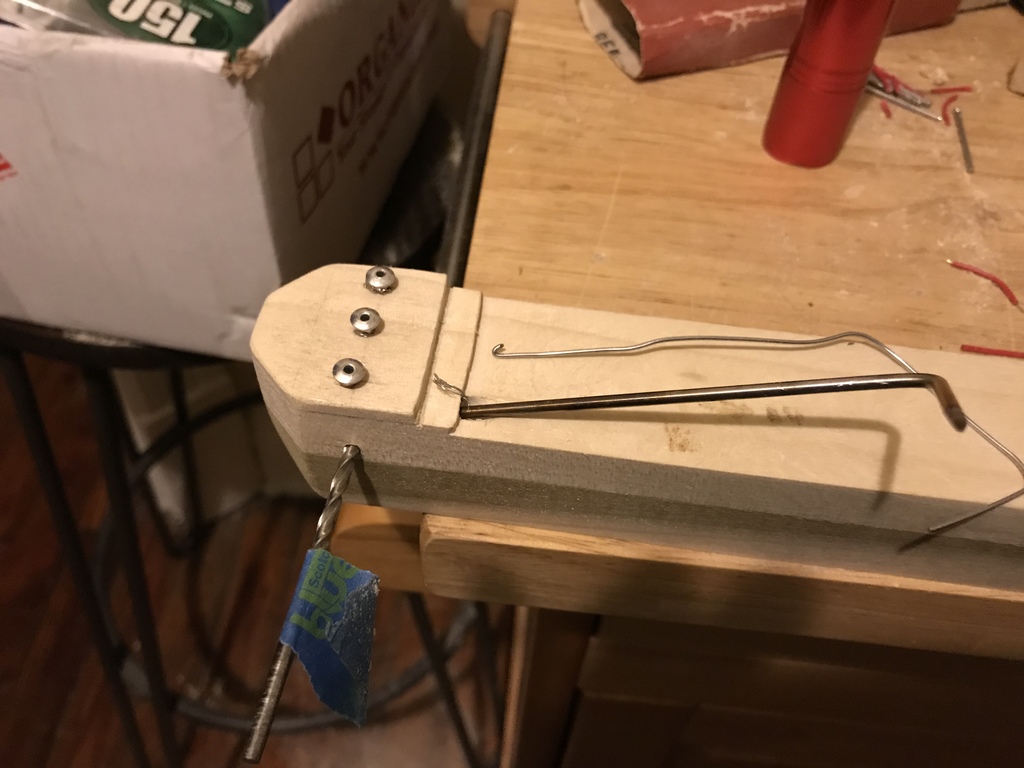 Simply earth one ferrule and use a bridge with a fretwork or bolt saddle - that's what I do. Keep it nice 'n' simple.

Your video is where I started with the grounding question. Thanks for that. But I wanted to use a wooden bridge, so I needed a way to ground all three strings. Hence the extra hole to create a gallery between the string holes. I’d considered a hardtail bridge, but I’m not overly fond of the look of them on a cbg.

A simple way is to just push a nail (or I use the pin form on of the rivets) thru' the ball ends of the strings once it  is strung up.

Another great idea, CbJ!  Your videos have always been a great help!

Hi, another way is to fit length of fretwire in front of the string exit holes so all strings go over it on their way to the bridge. And instead of threading the wire through holes terminate it in the fret slot with the fret on top.

That is an elegant solution.

Thanks Bruce, I don't like making suggestion or giving advice if it does not come from personal experience. When I made the suggestion I had only a vague idea of what to do. Now having tried it I can say easy peazy, wadayathink?

First I marked out on this old neck sample I had 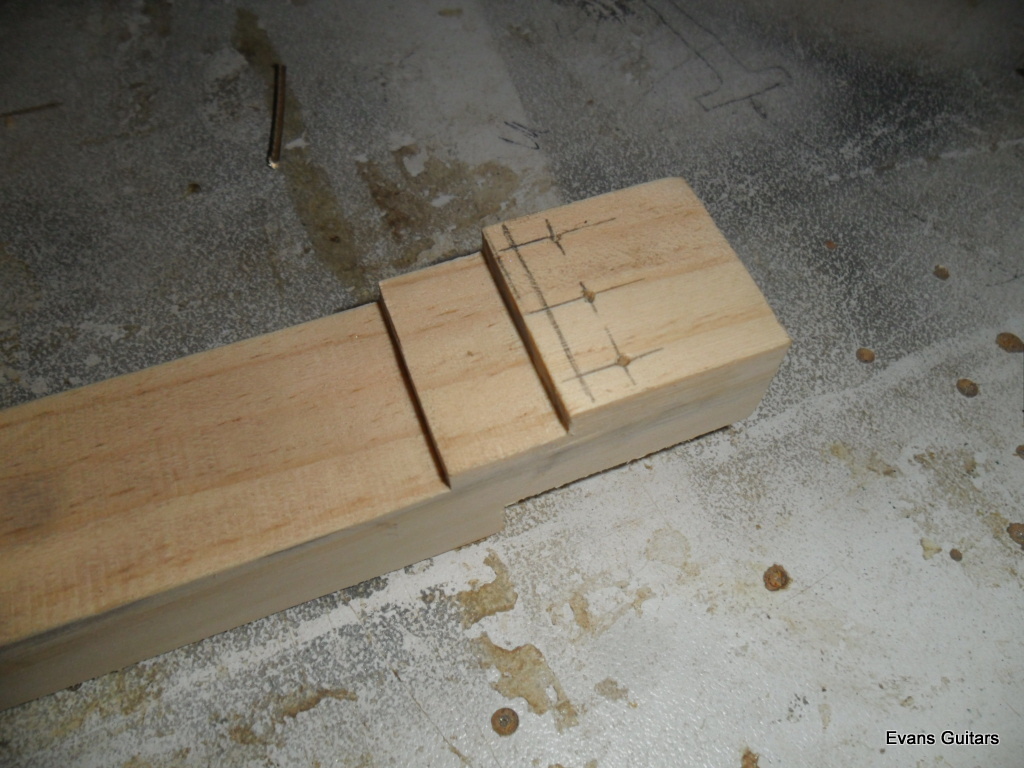 Then I drilled two holes of different sizes, one in the fret slot and one to meet it from the side. Then I pulled the wire though with the special [bent guitar string] tool. Too easy, only a short distance. 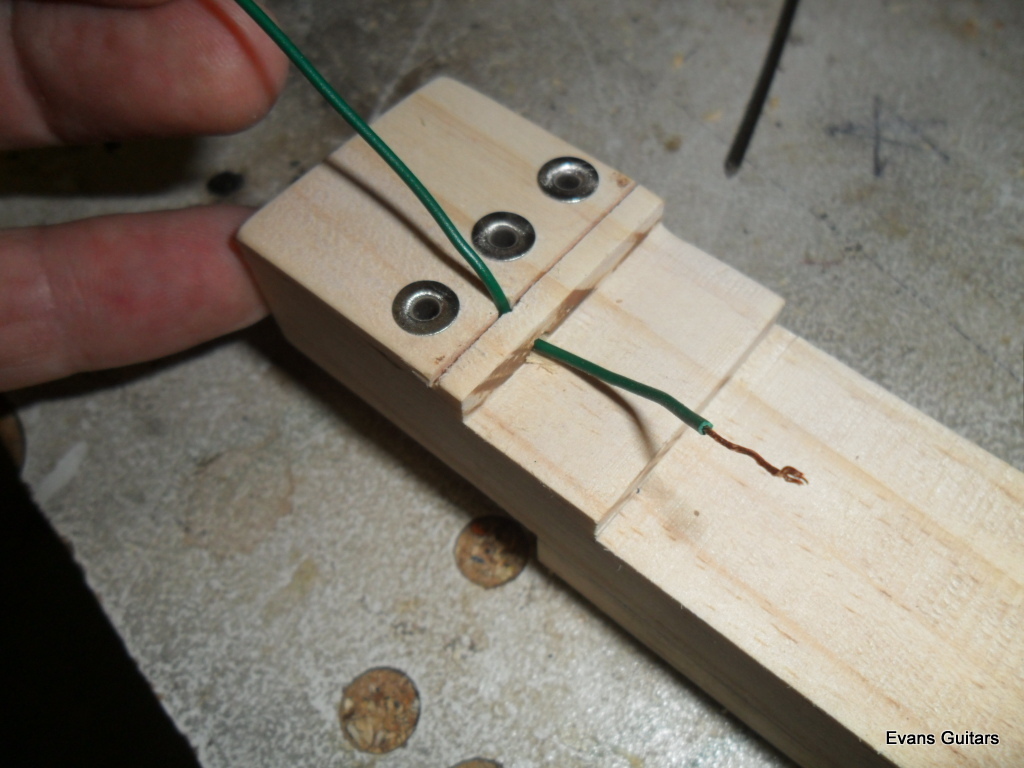 I pulled the wire through and pushed the bare wire down into the slot. The slot is not deeper than the fret tang 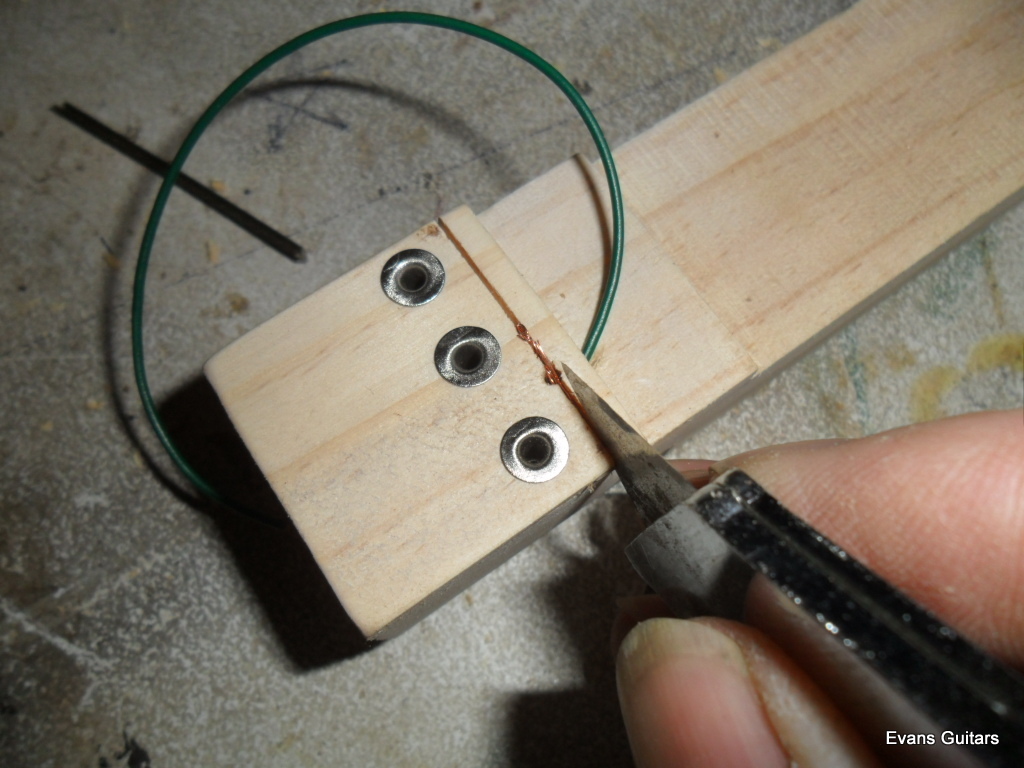 Then the fret is tapped in, and a test for continuity is made 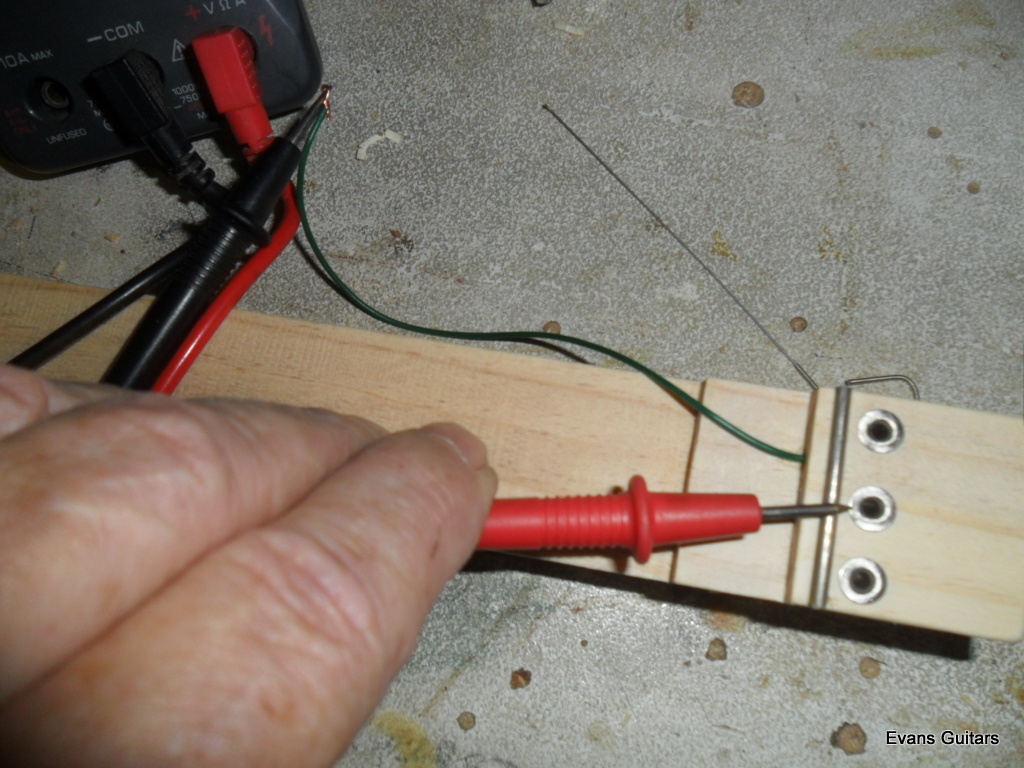 Shows the finished job and the rivets I used. I used the part on the left, they sit lower behind the fret than a pop rivet. 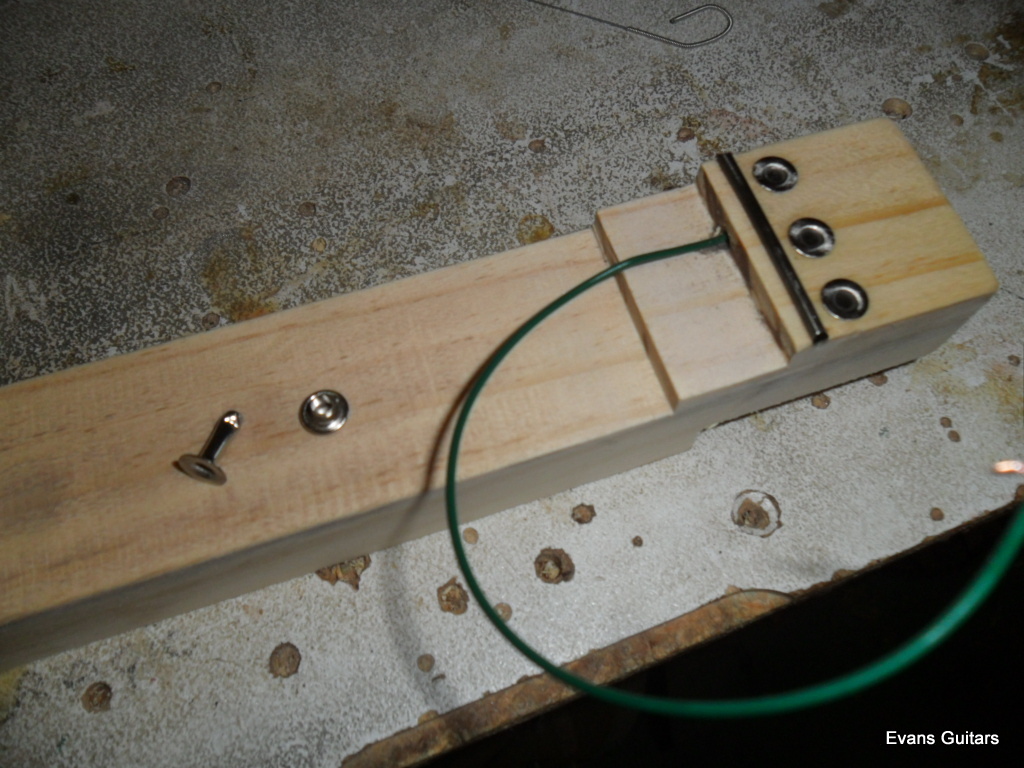 nice! I’d anticipated perhaps your method would need the rivets to be countersunk a tad, but you avoided that with those without the high crown. Definitely easier than my method, though I’m not yet set up with frets etc. after this build I’m gonna do a fret miter box with a depth stop.  With my vision, I can’t see well enough to use lines to cut depth accurately, so I bought a fretted fingerboard  on the last build, and had to decide if there will be more to justify more gear.

Hi Bruce, you mentioned your Eyesite problem, I overcame mine [after a stroke] by using these headband magnifiers. The one in the box even has led lights in it. 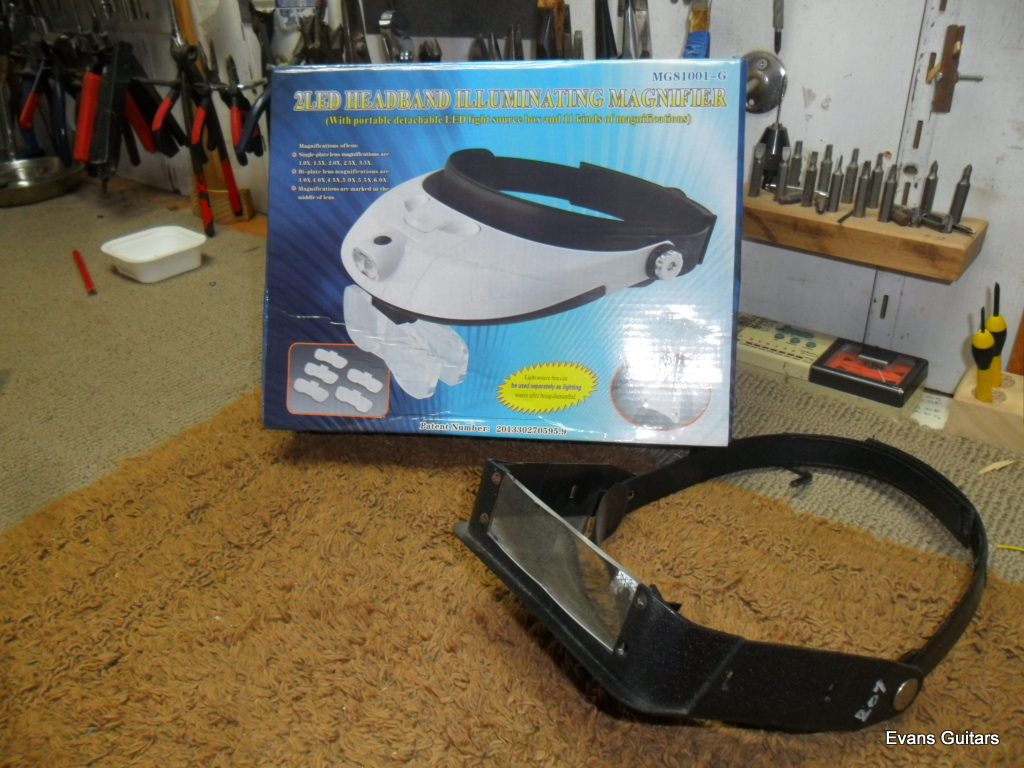 I’ve got one, but the prescription lenses are out of date and it’s not helping. I use a large stand magnifier with an articulating arm and fluorescent light like a doctor or jeweler might use. That helps.

NiceTaff, I also use this method. It always amazes me that so many people are on the same wavelength here, hope that build works out for you Bruce, cheers

Started by Fergus Lester in Performances, How to Play, Lessons, Concerts. Last reply by robert jones 6 hours ago. 11 Replies 0 Likes

"I  knew a good  balladeer like you would have made that investment.  "
2 hours ago

"I showed Linda and she pointed out that the skeleton was crawling to get water, but failed and died!"
3 hours ago

KOOL DOG HOOCH replied to Sean Murphy's discussion Table saw for fretting, blades, and power
"I mistakenly misnamed the tool. I was referring to a scrollsaw, that is why I mentioned the coping…"
5 hours ago

I can't seem to upload any photos in the group "homemade guitars", nor just direct on the…See More
5 hours ago
0 Comments 0 Likes

"Thank you Bob. Love THAT reference! I still have both of the Gord's Gold albums on my old ipod"
5 hours ago

Darryl Tuttle replied to Sean Murphy's discussion Table saw for fretting, blades, and power
"i was lucky enough to find a used stewmac blade at a garage sale...the luthier developed…"
6 hours ago