I know it is ugly as sin but it is able to be tuned. So I am happy with it, she has already gone a few changes. The parts were ordered through cb gitty after I purchased Shanes book. I had 3 cigar boxes but they ended up being made of card board. So I made a box using the dimensions of a john ruskin cigar box. I made the guitar to be played right handed and without frets. The dark wood under the bridge was the bridge and the oak fret was not in place. I had about 3/8ths of a inch in action at the 12 fret.

I guess you have to understand I have no clue about music and certainly, most definitely, how to use a guitar to make music. I tried pushing the strings down to the fretless fret board and dang near ripped a finger nail off. So I say to myself, self you need to raise the frets to the strings. I did not have any plans or measurements for the fret scale. So I did the divide by 17.817 thing with my calipers. Later when I got the gitty fret layout scale I found out I was very close to the 25.5 " scale, within a pencil line on a couple of frets at the end near the body. Glued the fret to the neck redid the bridge and nut. And it still did not feel comfortable in my hands.

Oh  kay Heres the dumb or dumber part. I made a right hand guitar annnd I'm lefthanded. I have to say it never dawned on me not to follow the directions in chapter 2. Normally I follow guide lines and the rest just comes by gut feel.  Could be I felt a little intimidated that I would try to make something that plays sounds or music. Well what ever the reason I flipped the high string with the low one. An did the same with the nut and bridge, so it now feels better. If you look at the box you will notice volume and jack, yep had to move them to. that's the reason for the 2 pennies they cover the old holes. Enough blathering here's the picture of my first: 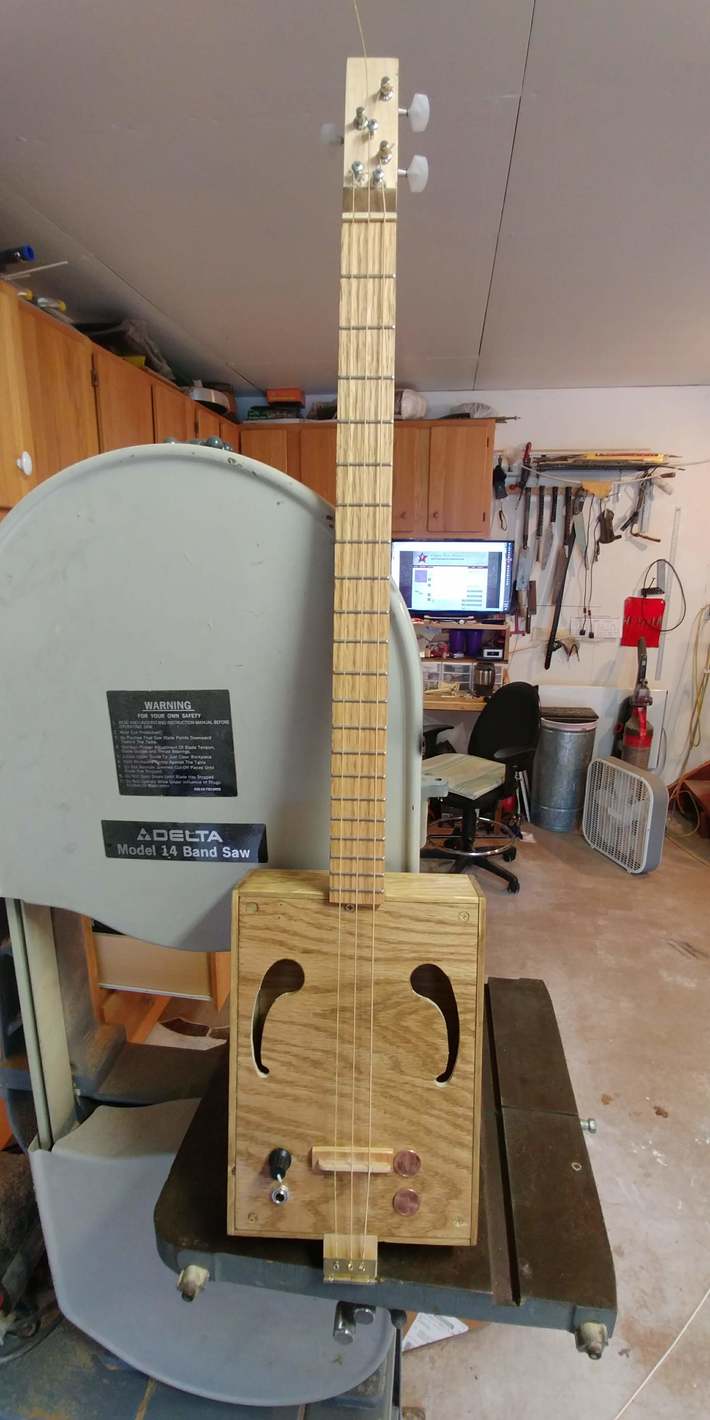 looks playable to me!  It will get easier and you will get better.

Looks very nice, like the others said, dont be so hard on yourself.  I've made over 100 now and the first 3-5 where learning experiences, what to do and not to do, you learn each time you make one, even now I still learn newer, faster, better ways of doing it.  Keep it up.

Started by Uncle John in Other stuff - off topic, fun stuff, whatever. Last reply by CLG on Sunday. 57 Replies 7 Likes

Outhouse Row. Got TP? Dave L fore ground and Mose in the back.

Outhouse Row. Got TP? Dave L fore ground and Mose in the back.

Feel free to save and keep these. You can have them printed as photos. A gift from Dave Lynas.
45 minutes ago
0 Comments 1 Like

In this event, students can learn lots of skills and knowledge that is important for them. Mostly…See More
2 hours ago
0 Comments 0 Likes

Working on a Ziricote fretless fretboard

Got the slots for the inlaid fret lines done and the bone edge markers. All done with my scroll saw.
3 hours ago
0 Comments 1 Like

"Red! Pretty too. And I know that yours sound good."
12 hours ago

"Thanks, Rope and Fantacone.  It was good to be back building.   I will try not to…"
12 hours ago