My experiments with a multi-scale fretboard (fanned frets)

I've been meaning to have a go at this for a while. I have seen it done a couple of times before. As always, I don't consider this to be entirely my own work or research, but rather a collaborative effort with others in the community. Let me share with you how I did it:

The benefits of this technique are:

Making a fanned fretboard is certainly more involved, but not too difficult. The easiest way to explain how is that you want to measure the fret locations for a different scale length on either side of the fretboard. I measured the frets for a 630mm scale on the bass side and 600mm on the treble side.

The other consideration at this point is where you want the two scales to meet, i.e. which fret will be at a right angle to the neck. I chose the 12th, but it is possible to chose the nut (zero), or any other fret if you wish. I marked out the frets on the bass side first, then positioned the ruler at the 12th fret and measured backward from there from the treble side.

When cutting the frets, I marked them as usual with a pencil, then scored with a knife. When cutting the slots with my fret slotting saw I used wooden blocks clamped in place to get them as accurate as possible. 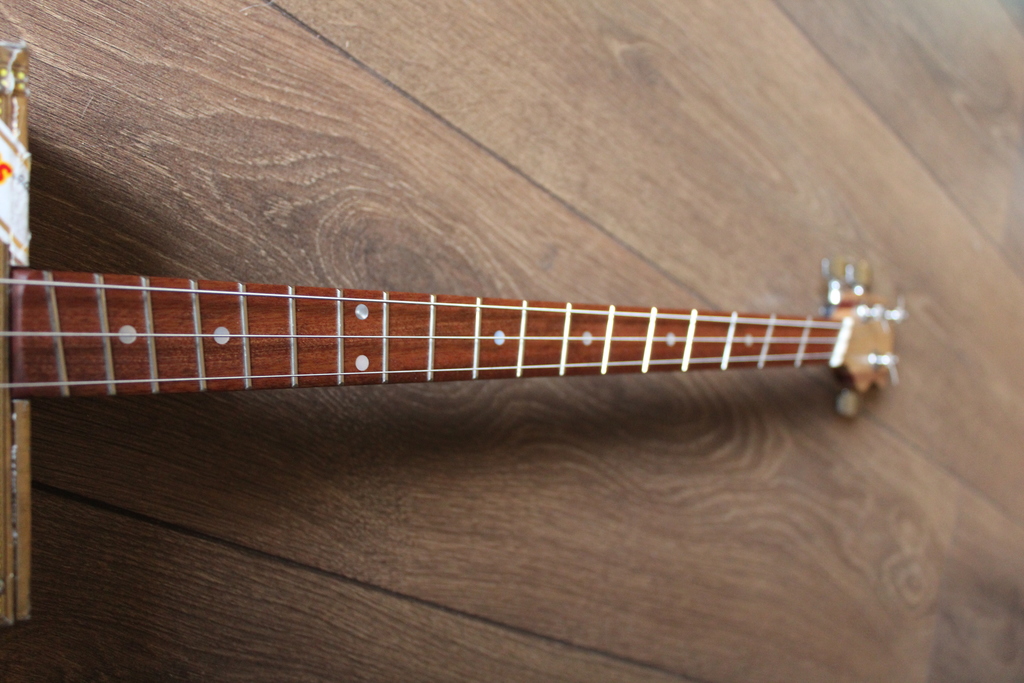 (Another very important consideration at this point is that if you are intending to taper your neck, mark the taper first, then the fret locations along where the final limits of the fretboard will be after tapering. It will not work the other way round! I had to make the fretboard twice, but fortunately I realised before I glued it) :-)

Is this making sense so far? This leaves us with a nut and bridge which will be on quite an extreme slant. This was tricky! Both cutting the nut to shape and filing the slots was a real pain. Took a couple of attempts.

So that's about it really. This is the finished guitar: 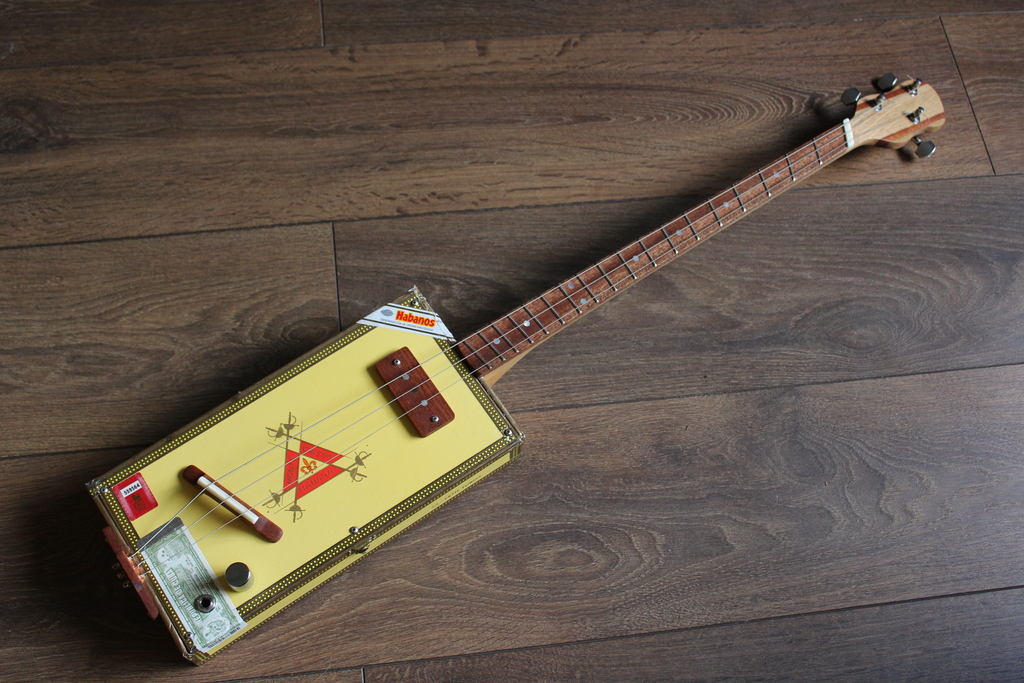 So, is it nice to play? Absolutely. I feels really natural, and not at all weird. Is it worth the effort for a 3 string? Sure, why not! Would I try it again? Yeah, probably, although there's nothing wrong with good old fashioned straight frets. This was the most fun I have had making a CBG in ages. I think its the fear factor - I spent the whole time thinking 'this might not work' :-)

Give it a go if you fancy a challenge!

As far as I know, John Rose invented the fan fret instrument when he invented the Orpharion in 1598.  This was a 9 course (18 string) flat backed lute with wire strings.  It has a rich and pungent sound and works great for solo as well as accompanying the voice.  I may build my next Tiorba Cigarra (9 string) using fan fretting. Thanks for sharing this wonderful instrument.

here is a very easy to use fret templet. you can pick all kinds of options, like scale length, number of strings and such.

I've made a few of these, here is one.

Comment by Richey Kay on April 20, 2015 at 12:34am
Thanks folks. Jim - if you would like me to clarify anything for you, just ask. I would quite like to have a go at doing this on a 4 string too.
Wayfinder - I see what you mean about the slanty frets, but don't you think that's kinda encouraging improper technique? What I mean is after learning that way, wouldn't it be harder to adjust to standard frets?

Comment by Jim Morris on April 19, 2015 at 5:35pm
Ha! I do fancy a challenge if there are tangible benefits. Thanks for the explanation Richey. It's all (not very) clear to me now but something I might try just to see what happens!

"Hi Rooster, we live in Uptown. -Glenn"
50 minutes ago

Paul Craig replied to Paul Craig's discussion Bolt on neck to a set neck body? in the group Building a Cigar Box Guitar 101
"these 3 pics show the mock up, the contour I'll need to carve and the way the spacer gives the…"
4 hours ago

This has nothing to do with a CBG, but the situation I was dealing with and how I overcame it could…See More
4 hours ago
2 Comments 0 Likes