I wanted to do a non-kit build for the first time (and wanted to go fairly primitive), so I mostly just grabbed stuff I had lying around.

The body is a small (about 8x5) cigar box I picked up for 50 cents at a yard sale, painted green, and decoupaged a poker hand onto.

The neck is a piece of wood I pulled off a garbage pile. The bridge and nut are a couple of "bats" ("one-hitter" pipes for you know what) that I bought for a different build that went bad. I used a violin type friction peg to tune the single string, which was just an old high E string I had discarded from a regular guitar when I changed strings on it.

The only power tool I used was a drill (for the sound holes, the string hole at one end of the neck, and a pilot hole for the friction peg at the head (I used an awl to get the hole right for the peg, but broke two pegs before I got it big enough for the peg to go through and small enough for it to have grip and hold tuning). 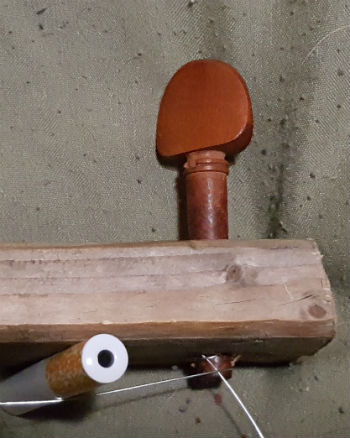 Yeah, it's rough. The neck is already splitting at the head, as the wood is old, cheap, and dried up from sitting around for years before I picked it up and said "hey, a guitar neck."

But hey, it makes noise. And I like it.

Yeah, I may just go with a plain bolt for the nut. But if I can find or think of something gambling-related, I'll use that.

With this one, I just wanted to finish a project that wasn't from a kit and where I did as much of the work as possible, and so I grabbed what I had lying around. A one-string, fairly primitive diddley bow seemed like the way to go for that.

I think my next build will still be non-kit, but that I'll order some Gitty parts (tuners, perhaps even the neck). At the moment, I'm thinking of building a bass, but I haven't decided between guitar and stand-up format.

That is progress and I can see the cigs would have worked for the Chesterfield box.  My uncle smoked Chesterfields back in the 50s/60s.   I am anti-cigarettes after losing 2 loved ones to them and having them be a factor in one other's death.

Good idea on the poker chips.  Maybe just a plain screw or bolt for the nut?

I don't have a picture, but I've since replaced the "cigarette" bridge with two casino chips. I'll probably try to find something more thematic for the nut, too. I originally ordered those "cigarettes" for a guitar I was trying to make out of an old Chesterfield cigarette tin. EVERYTHING went wrong with that project, though. Only SOME things went wrong with this one, so that's progress I guess :D

Started by Jon in Other stuff - off topic, fun stuff, whatever. Last reply by Gentrified_Guitar 52 minutes ago. 6 Replies 0 Likes

Started by JD in Building Secrets, Tips, Advice, Discussion. Last reply by Cause the Blue rat 3 hours ago. 2 Replies 1 Like

Started by Tyler Jones in Performances, How to Play, Lessons, Concerts. Last reply by Keith Rearick 7 hours ago. 1 Reply 0 Likes

For crying out loud, HELP! Trying to locate supplier for my bridges

Chicken Guitars. They are the thing now.

Gentrified_Guitar replied to Jon's discussion How to sell cigarbox guitars
"I'm new to CBG and just lurking.  I'm not a builder nor seller.  Just giving my…"
52 minutes ago

The Hardest Button to Button

The Hardest Button to Button

"Awesome all around on this. Cool cover and great playing."
1 hour ago

"Thanks much for the kind comments Andires! I am ready to hit the road with guitar in hand and meet…"
1 hour ago

A place for all of us disgruntled old farts to gather and do curmudgeonly things. Stand up and…See More
1 hour ago
263 Comments 7 Likes

"Special Tools " Either Bought or Homemade

Hi YallThought it would be good for us all to share what Special tools we have or need , just to…See More
1 hour ago
284 Comments 2 Likes

Want to plug that thing in? Here's a place to share ideas about pickups (Both magnetic and piezo)…See More
1 hour ago
637 Comments 40 Likes