I just wrote an article with unloaded pictures.  It died and was lost immediately upon clicking "Publish Post", on a "connection reset".  No point in contributing if that happens every time.

I've built five prototype electric guitars, all with ordinary power and hand tools, like a router with masonite templates.  The first, of aluminum and Poplar, broke under string pressure.  The 2nd, of oak and masonite, still works.  The 3rd was just too big and ugly to live.  The 4th is big, heavy and ugly, but plays well, with four matched single-coil pickups and 10 humbucking outputs.  The 5th of Poplar and Luaun plywood, not quite finished w/o an electric output, has more in common with a…

My Dad picked up a small oval washtub at a yard sale and gave it to me.  He was a fan of my washtub bass and thought I might do something with it.

My son Riley gets builders credit on this one.  He had been wanting to do a full scale six string guitar, so we found a few online examples of guitars with a similar tub.

We put together some rough plans and he built it with some help here and there from dad.  It is sort of a hollow-body electric. It has a piezo disc pickup on the…

I wish I had built my own guitar instead of dealing with the above "builder." fret metal was ragged and I sent it back, after he refused to pay for shipping. Kyle returned it to me a week later with the same issue. Buyer beware. Anyone have a clue how I can fix this issue? Thanks in advance for your help

Washtub bass project from back in the spring:

The wood is all air dried cherry and walnut from the farm.  The washtub belonged to my great aunt.… 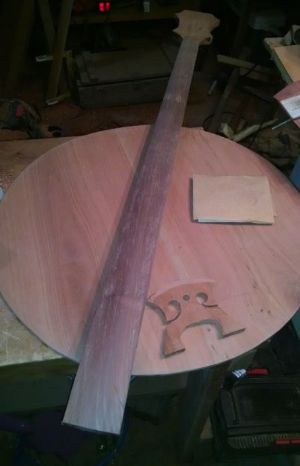 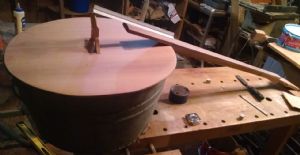 Finnish lumberjacks played on their camps an instrument similar to One String Sam's diddley bow, sometimes in duett with a crosscut saw.

For finnish followers I add here descriptions I found on internet:

Entry 1. Ramblin'; An Ethno(detrito)musicologists Journey to Analyse the Repertoire, Cultural, and Social Aspects of the Cigar Box Guitar Revolution.

Ramblin'
An Ethnodetritomusicologists Journey to Analyse the Repertoire, Cultural, and Social Aspects of…

I will attach a picture from a guitar case of my Dad's from 1935.  My Dad was 17 at the time.  He was born in the Great Depression Era.  He wanted to play guitar, but times were hard and he couldn't afford one. He was a gifted woodworker and the shop teacher asked my Dad if he would be interested in staying after school and earn some money repairing "Well to do" people's furniture.  He did this and after a time he had enough money to build a 6 string guitar and play it in the  High School…

I need of some advice

This is my first post but dunno if this is really place to ask giving the nature of the site.I've only been learning to play for the last few months, kinda struggling I've got an old acoustic that I'm learning on, but I purchased a rather beat up jJim deacon jdst62 with a practice amp for cheap. Im limited on tools I've got access to right now as staying with a family member my question is if I removed a few strings, took my frets off and filled the grooves in,some how managed to mount a bolt… Continue

Just another type of resonators, based on gramophone pickups

Hi chaps. Thanks for the great comments and advice.Jim, I'll check that man out, thanks Uncle John, It's not for sale ). Great encouragement, thanks and passed on to Tom, who I've suggested should jo…

Hi chaps. Thanks for the great comments and advice.
Jim, I'll check that man out, thanks

Uncle John, It's not for sale ). Great encouragement, thanks and passed on to Tom, who I've suggested should join CBN. Your point about strengthening the corners...I had way too much resonance from the plate, especially B 4th fret, which I've managed to dampen with part of a beer mat jammed in under one of the corners. I guess new plates are flatter but they miss the character. Corner brackets…

Mad respect for Shane. Many great tips that I have used. And I understand the goal of making and selling for income. Though I sometimes have two and possibly three projects going at a time, if I'm not careful, I risk building the same guitar over and over. For me, The less I make it a time the more original and one of a kind they turn out to be. Sort of like having kids one at a time instead of quintuplets. So I try to use different wood, sometimes drastically different boxes and shapes,… Continue

I'm using riffstation (paid one and Beta) which I find great to see chords and play along with. "Country Honk" without the fiddle part is my fav challeng at the mo but I can pick from Utube with the Beta version and my own, vast, music collection with the paid one.
This is not an ad, btw, I'm just a newbie passing along something I find very useful and fun.
If anyone can help me I'd be grateful to be pointed to a good 3-string tab site. I've tried using the 6 to 3 string conversion…

Started by KOOL DOG HOOCH in Other stuff - off topic, fun stuff, whatever. Last reply by Taffy Evans 18 minutes ago. 1 Reply 0 Likes

Started by Tim W in Performances, How to Play, Lessons, Concerts. Last reply by Taffy Evans 46 minutes ago. 10 Replies 0 Likes

Started by Tim W in Performances, How to Play, Lessons, Concerts. Last reply by Tim W 1 hour ago. 1 Reply 0 Likes

Started by the anonymous pick in Performances, How to Play, Lessons, Concerts. Last reply by gary herget 10 hours ago. 23 Replies 0 Likes

Started by Robert Bryan in Performances, How to Play, Lessons, Concerts 11 hours ago. 0 Replies 0 Likes

Started by Cause the Blue rat in Performances, How to Play, Lessons, Concerts. Last reply by Myron Joe Hickel yesterday. 1 Reply 2 Likes

Taffy Evans replied to KOOL DOG HOOCH's discussion In memory Hooch!
"Hi Hooch, man that's sad sorry to here that, you must be gutted. When the time is right you…"
18 minutes ago

Taffy Evans replied to Tim W's discussion One finger Barre cord technique
"hi Tim, I don't work in those numbers but anyway a couple of points that will help you under…"
46 minutes ago

Tim W replied to Tim W's discussion How do I post a picture?
"Sorry; I switched to “desktop mode” and now it looks like uploading worked..."
1 hour ago

silvernitrate updated their profile
1 hour ago

Simplified sketch of string height, action and fret heights. I bought a cbg; but the strings seem…
1 hour ago
1 Comment 0 Likes

Hi,I wanted to post a sketch of the action on a guitar...but I don’t see a way to do it via iPhone…See More
1 hour ago
1 Comment 0 Likes

Myron Joe Hickel replied to Brent Kasl's discussion Correcting a back bowed neck
"It sounds to me like the wood acclimated to the environment of your shop. Cutting a scarf did not…"
2 hours ago