can't seem to upload music here but if you want to hear how the jelly baby tin banjo sounds visit here www.myspace.com/marshallstapleton

So my License Plate Reso is not selling. Don't get me wrong, it looks as cool as hell. I just don't think I like the way it sounds. So I am going to do something about it. I am going to modify it into something else that I can use. I have a really nice Reso built by Shane Wagstaff who is also on The Nation. It's a sweet sweet sounding box. So I will have a go a modding the License Plate Reso myself into a non Reso with a mag Pup.… 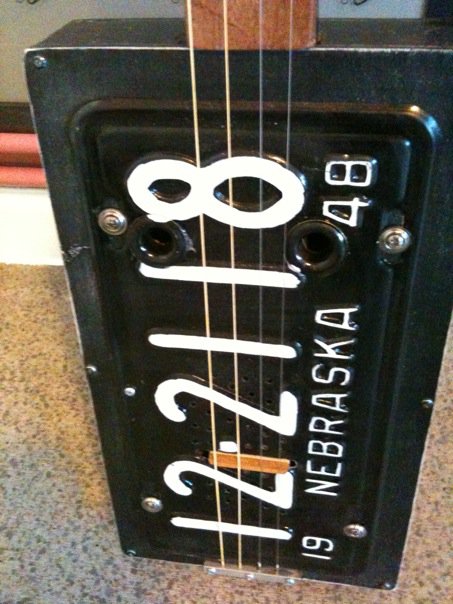 I am building a six string cigar box. The neck comes from a johnson acoustic. The problem I am having is after taking the johnson a part I noticed the trus rod wasn't attached to the headstock it is basically floating around in the neck. There is no "point of entrance" on the headstock. Should I drill into the headstock to try and secure this??? How would I go about doing that?

i am using a johnson acoustic six string neck for my first cbg. the truss rod isn't attached to the headstock it is just floating around. there is no point of entry on the headstock. should i glue it in place, or drill through the headstock and TRY to secure it? I am finished with design and cuts, just waiting to clue it in place. let me know what yall think.

I picked up my Cigar Box this weekend at a charity event. Phil, the guy who built it has made tons of them with special needs kids. This is a special guitar :) Thanks Phil ! I posted my first sound-clip with my CBG. I used Line 6 POD with a James Wilsey patch to give it some old school verb.
http://soundclick.com/share.cfm?id=9796547

Been getting some pickups and 3 on a stick tuners at suntek store, single coil magnetic with volume and tone for ~$6.00 they sound pretty good to me. Kind of a pain in the rear to find all the guitar parts on their site though.

Cool idea for a build.

Cool idea for a build if only I could hammer a nail into a piece of wood straight! Maybe I could get someone to build it?

1. Buy a decent Ouija Board from Ebay. One made from wood rather than card. One with the letters burned into the wood maybe?
2. Use it as the top of the guitar box.
3. Tune it to the so called 'devils tuning' and see if it inspires me to write something dark!

you can listen to a podcast of the show that was recorded 10/20
here:

the rev is the man

Shane and the Nation get a mention in Nokomis, Fl

So what I want to do here is to explain how I determine where to cut when I make a scarf neck. It was hard for me to calculate just where to cut the neck stock so that i had enough to make the headstock (pegboard if you want) but not too much. I tried math. I tried templates. I tried Zen. Then the answer was simple! You will see below.


First off, I make my scarfed necks where the scarf (headstock) is over the neck and both the neck and head are under the fretboard/fingerboard.… Continue

Dark Was the Night, Cold Was The Ground

So this is what’s on my interstellar record player: Dark Was The Night, Cold Was The Ground—Blind Willie Johnson, 12-inch… Captain Tattoo & Body Piercing in Lancaster, PA is having their GRAND OPENING

I like to "play" ( pick the melodies of ) folk music. This is just a start. I plan to add additional songs to this post so I can have a copy of my song tabs that I can share with you all. My cigar box guitars tend to be diatonically fretted as are stick dulcimers (strum sticks) and mountain dulcimers. You can also find a lot of easy-to-play music by searching "strum stick" and "mountain dulcimer" web sites. My favorites I'll put here using a "play by numbers" format…

Part 2: Adding Binding to a fret board

In part one, I selected the material, milled it down and cut it to the the width (-) the binding material (x) 2. I cut my fret slots and am now almost ready to start getting the binding ready for glue up.


First I will cut a radius for the binding to wrap around at the bottom of the fret board. Then in the picture below I clamp the binding to hold it in place for bending. 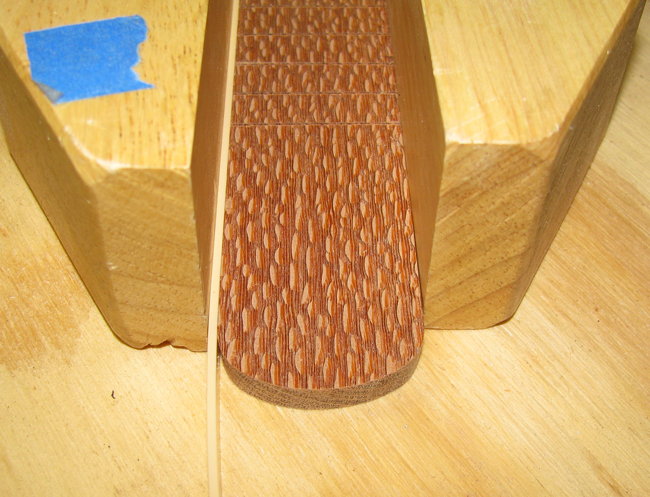 Next using a variable temp heat gun, I slowly… Continue

Part 1: Adding Binding to a fret board

Adding binding to your builds does more than just add to the look. If done right it adds greatly to the feel and playability of your instrument. For those that have expressed an interest, below is my method for adding this traditional touch to the fret board.


It all starts with milling up the rough stock. I use 1/4" wide binding material from Stew-Mac which is 5 thousandths over. This means that I need to cut the fret boards to a finish thickness of 1/4" or just slightly under.… Continue

Rouding out necks with a spokeshave.

So making nicely shaped necks isn't very hard. At least it isn't rocket science. First off, you have to want to shape your CBG neck in a nice rounded fashion BUT that is not a rule at all. No one says you have to round off any neck you make. If you want to then here is a very quick and easy way to make VERY nicely rounded necks that rival CNC machines or routers.…

Started by the anonymous pick in Performances, How to Play, Lessons, Concerts. Last reply by Uncle John 44 minutes ago. 3 Replies 0 Likes

"Thank Bob and Uncle John, The soundboard wood is acacia, and the bridge is french oak from a local…"
17 minutes ago

"Thanks Bob, I had another La Aroma box, but this was an older one. I discovered after cutting the…"
20 minutes ago

"Thanks Dave, I built this for a friend who gave me the box. I will be giving it back to her next…"
23 minutes ago

"Thanks Bernie, it was the right price too!  Can you post a picture of yours sometime?  I…"
25 minutes ago

Uncle John replied to the anonymous pick's discussion Update on cbn member “ Maddog “ .
"Hello, Patrick.  Kinda and I have been thinking of you.  Good bless."
44 minutes ago

Anyone interested?If you have waterproof, good quality sticker with your cbg I'd like to exchange…
53 minutes ago
0 Comments 0 Likes