I have been writing ,singing and playing songs for many years.
I have known about cigarbox inst. last summer.
I bought a couple of them at ebay becouse of the great sounds I've never heard before.
And now I decide that make a website to introdusce cigarbox inst.& music over here.
Well I have just get a domain of CBMjapan.com.(Cigar Box Music JAPAN)
Because I want to spread cigar box guitars in Japan, I ask for… Continue

Well Im a great believer in starting from the begining as that i also believe that is where we will find our ends . and as i stand on the edge with my toes curled ,of the cbg world i pounder my fate . what guitar will come out of it? where will i get a cigar box from? can i cut a fret board ? what about the electrics ? All these questions and more that are taken for granted by seasoned makers that now are on the road to a higher goal are with me today. but determination and the help of cigar… Continue

Four necks. Two sound holes. 42 strings. Two access doors; one on the upper player's side and one at the tail block.

Created by luthier Linda Manzer for guitarist Pat Metheny, the instrument took 2 years to build (approximately 1000 hours), and when the 42 strings are strung up to high tension, the Pikasso is under approximately 1000 lbs pressure. It weighs 6.7 kg or 14 3/4 lbs.…

Just off the train...

Hi, the name is Trea, im from Ireland. Saw Seasick Steve and fell in love with his cigar box guitar! I jump onto Google and was bowled pver to find this community! I hope to start my own project soon and ill share whatever pictures i take with you all.

high there nice to be here dick taits my name i play a leftie lowebowe and trying to build my first 4 string.sadly missed the uk cbg fest hope to be there next time. southpaw dick.

New the Site, but Enjoying what I'm Seeing

This is the first blog entry of my entire life! I just started my first CGB project last night and hope to get some pictures up as soon as I can. My next project is to build a CGB amp. There a dozen ways to do it, so hopefully I'll find the right plan for me. I am going to use a cube shaped cigar box to enclose the 3" speaker and the electronics. I haven't worked with electronics in long while so this should be a hoot!

What draws me to the CGB is the simplicity of the concept, the… Continue

Long time since I did a blog.

The Birmingham show was an absolute blast! Met some really great folk, took home some great ideas and knowledge and enjoyed every second of it - a huge thank you to Chickenbone John and his team for organising everything - Im already looking forward to next years!!
I took 18 cbgs and diddly bows down eventually I think, and it was fantastic to see everyone playing them and enjoying them - thats what its all about right?

Since the show… Continue

Friday in the shop

For once, I took my camera with me down to the shop. Usually, I really have trouble taking the time to STOP what I'm doing to bust out the camera. I'm always too interested in what I'm doing to take any "in progress" shots (and I really appreciate and value those of you who do -- since they are usually quite helpful to see)... ...and I guess today was no real exception. I began with glueing a fingerboard to a stretch of oak. 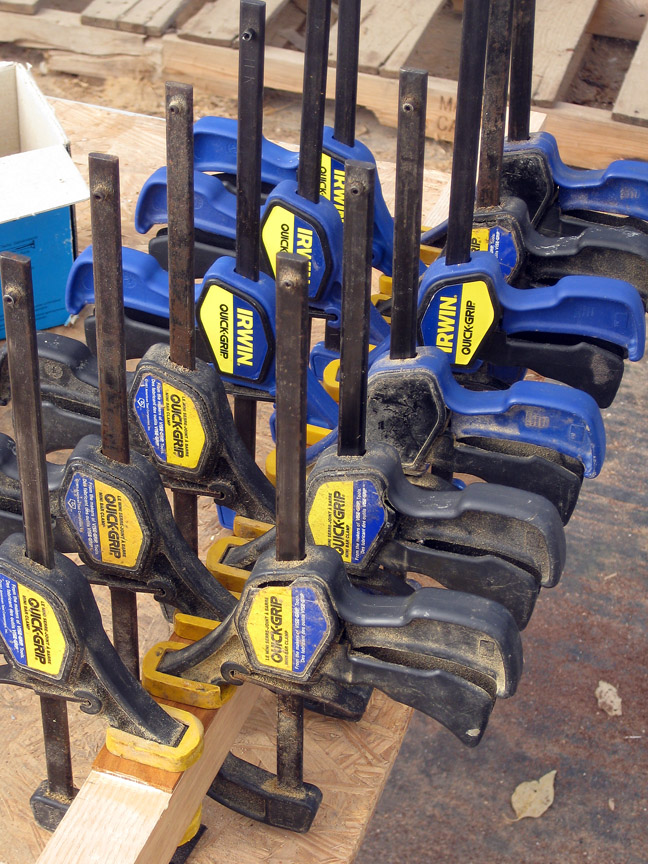 Then, I guess the… Continue

After cleaning it out and getting my things packed so I can ferry them over when I build I contacted Jonas to see if he wanted to build.
Seeing as both of us have pretty busy lives right now we have managed to get in two fridays of build into it but things are going well ahead.

The latest pictures show the baritone CBG I'm working on and how far I got the first day. Second day I got the fretboard glued on,… Continue

I've started sanding and shaping the neck and headstock. I added a few pics as well.

The neck/headstock is oak 1x3, and I am wondering what type of wood might make a good raised fingerboard? I've been using an acoustic guitar of my father's as a visual reference.

I've tapered the neck back by roughly 7mm on each side. It's not quite even on both sides but that doesn't bother me too much. I'm having fun seeing where I get with this as I keep working on… Continue

I am building my first Cigar Box Guitar. I 've never played guitar before of any sort, whenever I tried to learn, it was always on a right handed guitar, by a right handed person. Being a lefty, I wasn't able to get a feel for it in my youth.

I'd seen a few videos on Youtube of cigar box guitars, and really like the blues sound that one can play on them. Currently I have an empty Cohiba box, and a piece of oak in which I am attempting to shave and shape into the neck and head of the… Continue

Rookie of the CBG

Hey yall. I am new to this site, and to the CBGs. Although, I have a CBG, I haven't yet learned how to play it. I only know a little tune called shortin bread. I would love to play other songs on it. And I would love to make a CBG and a stomp box myself. I am going to need your help. I know alot of members have many years of experience with the CBG and building it. Your advice would be much appreciated. I have lots of questions. Thank you for your time.
I hope to meet many people on this… Continue

Hi all , really new to CBG making . Now on my second guitar and was wondering on string spacings for 3 strings across the fretboard.Do I centre the middle string and devide the distance to the edge or space the outer strings close to the edge ? My fret boards are 2" wide.
Thanks y'all..
Clive

Looking for someone do a one track recording

I'm looking for someone that could record a high quality recording of the cigar box of a slow paced song , very relaxing and peacful around 4 to 5 mintues long for a film I am working on. If you are interested I would like to hear from you and I can give you credit for the song on the movie for a webpage etc... Thanks in advanced

I just wanted to post my very positive comments about the first CBG festival in the UK, held last weekend (3rd October) at the Crossroads Blues Club, Birmingham, UK. It was hosted and led by Chickenbone John, ably aided by Ken Stratford and friends and staff at the venue. It was a fascinating day, I learnt a great deal, met some great people, heard some even better playing, and to cap it all off Hollowbelly played the main gig at the end of the day. What more could you want? It was great… Continue

To all at the first CBG event ,a big thank you ,especially Chickenbone his wife and all who helped organise it.I was apprehensive about going ,but was certainly glad I did.
What a great day , couldnt stop for the evening event ,but heared it was great.Maybe next time....
Im an avid fan of music,play bass (a little ) but enjoy my new hobby ,making CBGs.I picked up loads fv helpful tips and it was really great seeing other CBGs.
I was particularly impressed the lap guitar made by… Continue

I won my beautiful little 3-string CBG at a raffle to celebrate the 100th gig at the Crossraods Blues Club, Birmingham, UK. Tickets 66-70. I have never won a raffle before, nothing. I call it destiny, it had my name on it. It's number 153 made by Chickenbone John. I've now had it 2 weeks or so, I've learnt some tunes, maybe 6 or 7, and of course and jamming lots of others, any chance I get. It's a joy to play and just great fun. I'll get a pic on here as soon as I can, but I've only just… Continue

Now I am takin great care building this one cause it's for my son!
Will post some pics latter!

Yesterday me and JK had a day of work in the workshop so I started carving the neck to the 3 string and the material I use is oak.
I'm pretty pleased how the rounding on the neck turned out and I will most probably only sand it using low grit paper because i really like the "silky" finish.

The design will be very basic as it's my first build and i will mostly try to learn and get into the thinking.
Next week we will continue building and i'll also try to bring a camera this… Continue

Started by the anonymous pick in Performances, How to Play, Lessons, Concerts. Last reply by T-Gripped 59 minutes ago. 4 Replies 0 Likes

T-Gripped replied to the anonymous pick's discussion Update on cbn member “ Maddog “ .
"So sorry to hear of your lo. My sincere condolences."
59 minutes ago