Last night at the Destination Blues Listening Room, a monthly event sponsored by The Exchange in Bloomsburg, PA, Clarence Spady banged out a tune on the license plate guitar I built and donated for a raffle. It was dramatically untuned after being fooled with for a couple of months, but he found music in it. It was a blast seeing an instrument I built in the hands of such a talented musician! I hope the winner of the raffle enjoys the instrument too. It was autographed by the members of…

Back On The Road - Autumn European Tour

It had been a while, but it was time for me and Hollowbelly to go back on he road again…the Van Thom Weekender and the German Cigar Box Guitar Festival were happening on two consecutive weekends, so that was the cue to arrange a little tour. We had a contact from a new promoter offering a midweek date between the two weekends, and I managed to arrange some more dates on the way out and back, so we had a viable tour organised. Getting gigs is one thing, but getting shows that pay and work…

Next will be fretted. 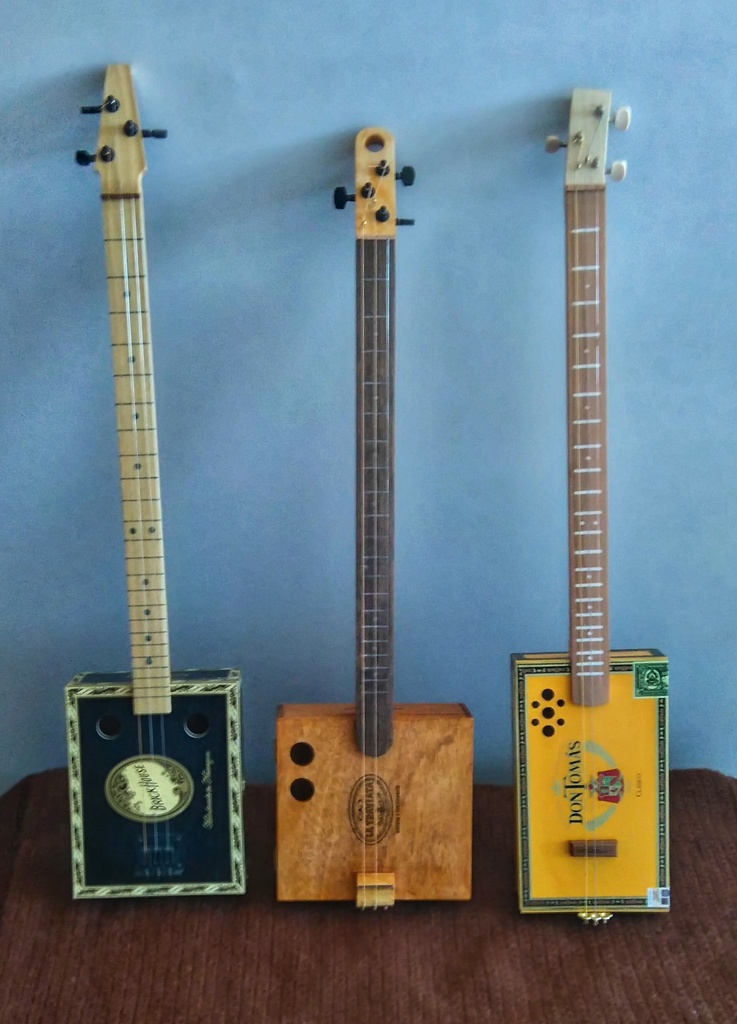 Does anybody know of any Cbc festivals in IL? Need to get together with like minded people.

I was once a man.
Who did not act as friends, acquaintances or lightning traces.

A skin on a river.
Bones in an hourglass.

The time so never flowed into me like it should have,
like he knew how to do it with the others at least.
Neither does blood.
The seconds quickly dried the one that I became one day.
The minutes reminded me of it.
The hours to certainly regret this still life,
Visible in every mirror,
in every pair of eyes,
in…

Just a quick about me and stuff

Proprietor of OneWithCoolness, building canjos and little guitars since a few months ago..

Create with no excuses.

I honor those who can build fancy instruments.I give more encouragement to others like myself who create a instrument and work hard to make it sound good with the limited materials they have. Then pass it on to others. The gift of music lasts a lifetime.

It's time to get weird.

Even though I have been building these instruments for a while, I still get excited every time I plug one in for the first time and here it come alive.

I got some really rough 1x2s and hand tools today in HCMC, quite the accomplishment. Basically I went to the wonderful Mr. Binh (of Guitar Binh Handmade Guitars), who sold me a lovely acoustic a couple years back, and he told me where to get wood and tools. I forgot a few things, but was able to hack down the 1x2s to get rid of split ends. Tomorrow a trip to the Humidor (the only real cigar retailer in Saigon)? Maybeeeeeee....

OK, I want to make a few one stringers or Canjo's, but my question is;...why do some, well, many that I've seen, mostly fret-less ones, have such super high action??? They usually have a super high nut and or bridge and don't look like you could do much more than twang it open string. I've seen this here and other places where it looks nice but appears to be impossible to play. Are these just made by people as a novelty, or inexperience, or am I missing something.

Started by the anonymous pick in Performances, How to Play, Lessons, Concerts. Last reply by Uncle John 30 minutes ago. 5 Replies 0 Likes

Started by KOOL DOG HOOCH in Other stuff - off topic, fun stuff, whatever 11 hours ago. 0 Replies 0 Likes

"I agree on the light stain. Don't change it too much."
10 minutes ago

"Nice! That clucking hen is smiling at me."
12 minutes ago

"Very nice.  I should make me one and learn to play it.  Nice simple design here, that…"
13 minutes ago

Uncle John replied to the anonymous pick's discussion Update on cbn member “ Maddog “ .
"Guys, I did not know Janet well, but think it would be good to tell you a bit about her and…"
30 minutes ago