The neck and fretboard are made of mahogany. I made the neck with dual-action truss rod. Fretboard has 15' radius.    Nut is made of moosebone, The bridge/pickup is Ted Crocker flatbed combo customized by me. I removed the original brass bridge and replaced it with customized…

Last Thursday evening I was outside giving the compost a turn with the spade and feeding the worms.  I went and chucked the spade back in the dirt pile and wacked my ring finger on the tip of the shovel already planted nearby.  HOLY MOTHER OF PEARL that hurt.  The whole finger tip turned black and blue and by 4AM the next morning there was so much pressure under the nail that I couldn't sleep from the pain.  Dr. Drillbit came to my rescue after a quick trip to the medicine cabinet for some… 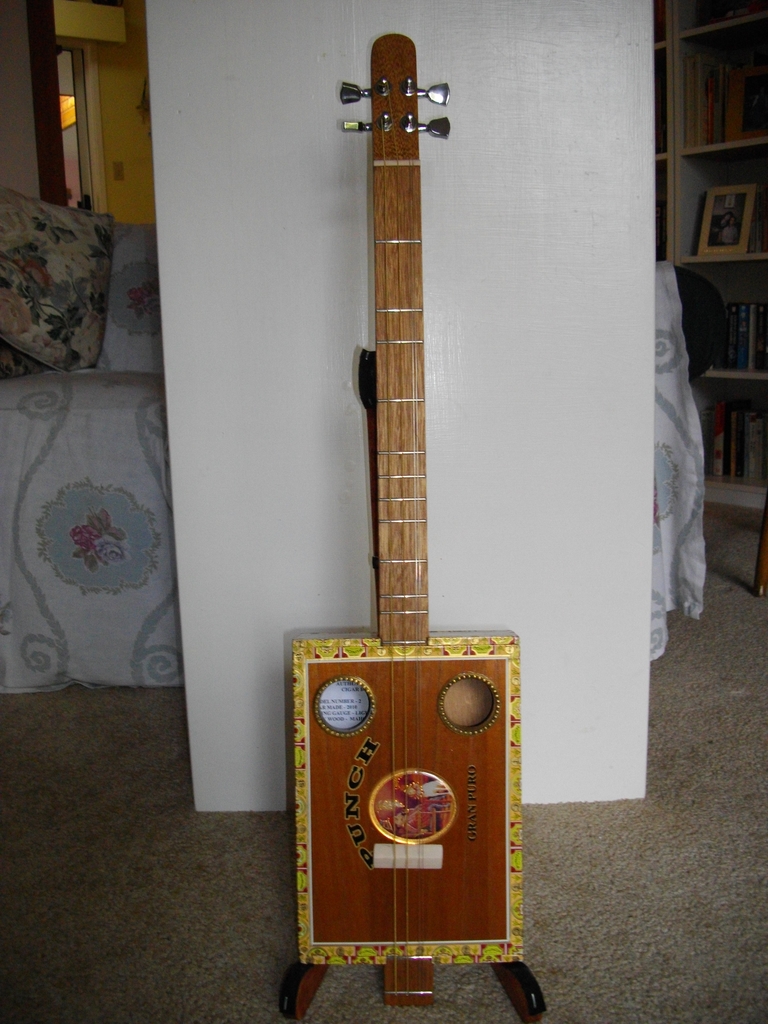 This is a cool one i built for a friend who is a well respected melodian musician here in Vancouver. His name is John Krieger. He wanted me to tweak it a bit and put a double octave string for the high strings and have a strum stick fretting on it. It turned out nice and sounded really beautiful. I used a nice Punch box i found in San Diego on a business trip and piece of…

Ok this is not CBG related but an old college buddy and I took in the Sold Out show. Steve Martin is one of the most prolific and talented entertainers around and they put on a damned great show.  Steve has been playing banjo since he was sixteen and demonstrates a mastery of both Scrugg's style and clawhammer style.  He included his comic banter for a most entertaining show.

I ran across a good (and free) printable circle of fifths on www.tikiking.com

The "circle of fifths" is a term coined by German…

And, more music will be added as we get it done.  If you just can't wait for that, I've got demo comps available for everyone.  Send me mail at slidebox44@yahoo.com if you want it!!

All - For those that remember Leaving Miss Blue (Shane, especially!), I am proud to say that after 1+ years I have found the perfect mix of musicians to help bring the Revolution to the masses!  We just signed a lease on a permanent rehearsal/recording space (we do it ALL ourselves!), along with a shop to make these damn instruments that I can't seem to shake.  Plan is to practice/pre-prod before recording (2 months at most), then record (1 month max), press to vinyl/CD (10 days), then play…

Clifftop- My first experience at the Appalachian stringed band festival

I dont even remember now where I heard about the Clifftop festival, seems it was a flyer or ad sometime last winter. But I do remember it was described as the "biggest gathering of its kind" and I thought I might go check it out. Time passed and I had mostly forgotten about it, then I went to see a local Bluegrass band and chatted with them between sets and became excited about learning some old traditional tunes.

I didnt know what to expect, but I kind of assumed it would be…

I play mostly on the back porch of my house.  My neighbors can hear me, but at least I'm spared the sight of their laughter as I teach myself to play.  For the record, the birds don't seem to mind.

Recently, I started playing out in front of friendly audiences.  I took my CBG to the lake cottage this last weekend and played sitting out on the dock at sunset.  The audience is family and close friends, so they sort of have to be nice, and they were.

THE SPREAD OF THE CIGAR BOX GUITAR REVOLUTION! Well, alongside my many accomplishments, among the many hats I wear in my busy life, I can now add one with great tears of pride: Founder of the Kansas City Cigar Box Guitar Festival. It took three years of pitching and talking and finally joining the Kansas City Blues Society itself, but our first festival occurred on July 31st.

I had a great idea to make a stand for CBGs when you take to festivals. These fold flat, and tho only hold 3 CBGs, are very effective and will be quite handy. I will post a picture of the plans and the Google SketchUp (you can download the viewer or the app -- its free). 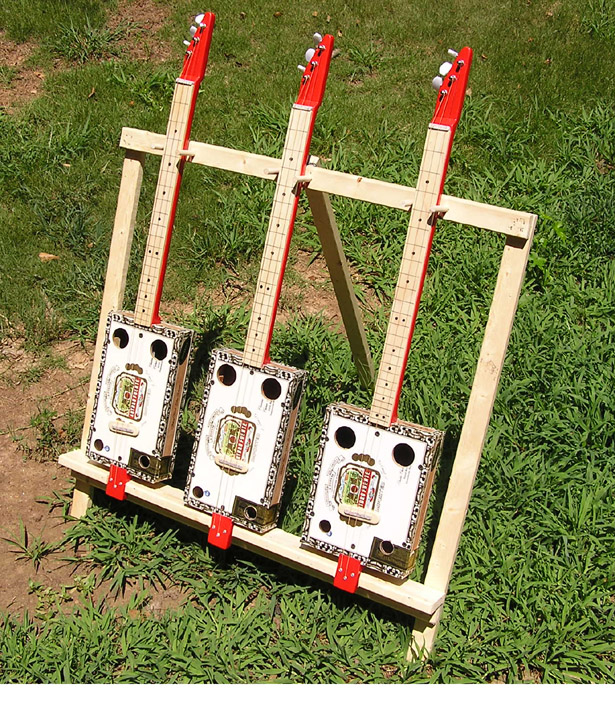 Thought you might be interested in having a butchers at my 'tour bus'-I didnt want to clog up the nation with pics of a motor so I've placed them here.You can follow developments as the work on her continues throughout Spring 2011.

Its a 2003 VW T4-they are used as surf buses around these parts and campervans too.It has only 45k on its 2.5 turbodiesel engine and believe me I was lucky to get it-they are like gold dust, especially in this…

Started by the anonymous pick in Performances, How to Play, Lessons, Concerts. Last reply by Uncle John 20 minutes ago. 5 Replies 0 Likes

"Nice! That clucking hen is smiling at me."
2 minutes ago

"Very nice.  I should make me one and learn to play it.  Nice simple design here, that…"
3 minutes ago

Uncle John replied to the anonymous pick's discussion Update on cbn member “ Maddog “ .
"Guys, I did not know Janet well, but think it would be good to tell you a bit about her and…"
20 minutes ago