May 12, 1929 was the proudest day of Zee Woolfolk’s life. That day she was ordained a minister of God. The Reverend Booker Brown, Zee’s friend, mentor and former pastor, was there with a bouquet of flowers, a presentation bible and a proud, fatherly hug. Zee had dreamed of serving as assistant pastor under Booker, but that was not to be. Booker had been called to a bigger church in Nashville and Zee would remain and…

Jamie Mac Blues had a great Idea following his song tribute to put together a CBN tribute album.

So please post any tributes you have here and somehow we will figure out how to do the rest. (Help!!!)

MP3 for the album and post a Video for us all to see as well if you like.

To Start You off:

The never-ending weekend...but not in a relaxing chilled out way...

These days it seems like my working week continues thru' the weekend and back round to Monday without much of a break. I was all geared up for leisurely drifting over to meet up with Hollowbelly at a country pub on Friday night to see him play for the Panther Owners Club (motorcycle weekend). So on Friday night  I go out to pick up some pizzas for the family...get home and Mrs Chickenbone tells me that Mr HB has been on the phones (both land line and mobile) saying he's at the gig but…

There has probably been no one in the last few years that has uncovered more about the obscure roots of Dylan's recent output than Scott Warmuth.

His research has been nothing short of revelatory. Warmuth has linked lines from Dylan's recent albums, as well as his book…

Just found out I made this magazine's 55 Good Things About WV issue. Beats the last time I was in the news ( Springfield Man Cited for Removing Cigar Boxes From Dumpster).http://www.statejournal.com/story/18855956/55-good-things-about-west-virginia

Confession of my Addiction!

My Names is Leadfoot and I have an addiction!

They say the first part of recovery is to admit you've got a problem and I have to admit that I have an addiction! Last night  after coming off stage at the Icklesham Beer Festival I had a realisation just how serious my problem has become. I'm completley hooked on playing Cigar Box Guitar Rock Blues live! Playing on a big stage and through a professional PA with Sound and Light engineers was a real buzz and rush. I loved being up…

box selling on the nation

Hay, guys and brothers!  Appreciate the feedback on the post!  I don't know about Arabs and Eskimos, but I do know that Johnny Depp and Billy Bob Thornton seem to be happy with theirs!  I was in complete shock when that happened.  Could be that I need to stay where I am on the sales end.........once again, I appreciate the great feedback, keep on buildin' and hope for the best!

Lessons of a Newbie Busker

Note:  Stick with me, it will take me awhile to make my point.  Apologies if you drop out early with disinterest.  :)

I don't get or make the time to go outside my home to play very much.  Last night, with my girls away for the weekend, I decided to head out with my guitars in hand.  Truthfully, I could have spent a lazy evening at home in peace and quiet.  However, I committed myself to do it and around 8:00 jumped in the car for the quick ride to Saratoga Springs.  The small…

Here's the first amp project I did.

It was a ruby circuit from runoffgroove - (great site)

I used the picture version on the site, because I'm not much of an electrical guy at this point.

it makes it a really easy....like a  paint by numbers project.

I put the speaker under the lid to protect it when carrying around.

The Samo label matches a guitar I made at the same time, but it's really butt ugly.

I've learned a little bit since i built…

Here's something I finished up about a month ago. Started life as a craigslist violin and ended up as a strummer. I was surprised by the really nice tone. The doubled up high D string really adds to it.
The switches are on/offs for an embedded neck and seperate bass side cavity piezo's. Sounds best with both of them on.
The other output is for a really hot humbucker I buried under the wood into the neck. Sounds OK, but upon reflection, the humbucker tone is a little bit of a…

I finally found my “Holy Grail” of boxes – the half-moon shaped Artesanos de Obelisco.  Since I saw Kevin Brown’s build of one of these back in February, I knew I had to have one.  Here’s his: 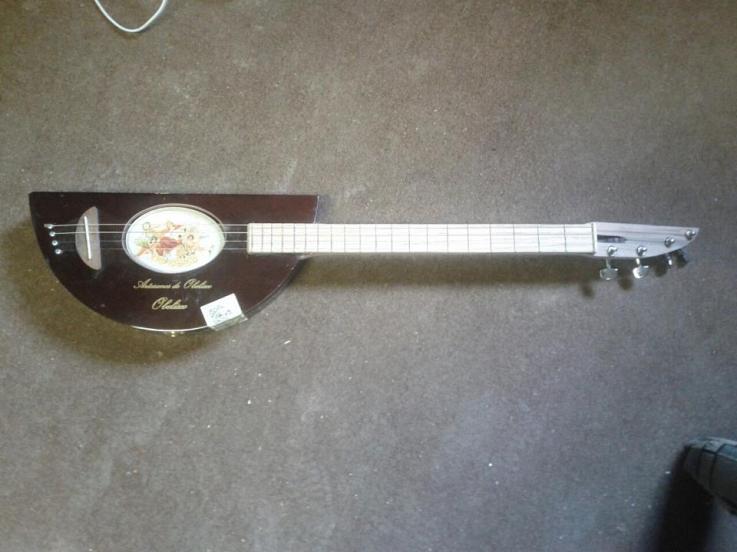 I searched all my regular cigar stores for months, but everyone said they weren’t made any more, or they had never seen one.  Long story short, I finally found one in an out-of-the-way…

My last blog made me think, has anyone ever started a CBG songwriting group here? I know a whole lot write original music here, I have heard some wonderful creations. Just thought, maybe we should put original music all in one group, and share any dreams we have for our music, or tips on where to market it and copy rights and PROs and stuff. I don't know even if it is possible, but I think this would be a perfect site to have a CBG publishing company, dedicated only to original songs and…

This is not done on a CBG, just letting you know. I just felt like sharing the story. Some years ago, I was a member of one of the greatest songwriting groups ever called Just Plain Folks. It is friendly, and a wealth of knowledge for songwriters.http://jpfolks.com/. If you write you might like to check it out.

Anyway, sometimes we helped each other in this site. Some people couldnt play but loved to write lyrics, and vice versa, so we…

How do you delete songs that you uploaded to CBN? I'd appreciate anyone who know how to direct me, and thanks in advance.

selling guitars on the Nation site.

How does a person sell or post some of their work on the Nation?  I would kind of like to post some pic's and maybe sell one or two!

I am going to be in a songwriters contest at the ARK the end of this month. I decided to do a CBG song. We only do one song, and can win recording of a cd, Recording time, or a little money. Then the finalists play in a festival called The Riverfolks Festival. There are some good songwriters there, and most likely I won't place, but I wondered if I could ask for your help. Anyone who has time, who could listen to these three songs, Loving Arms, Cool Cool Water, and…

I finished my first CBG and I can't wait to start on another one. As soon as I find my cable for my camera I will post a picture of it. Seems like I have the bug and I want to build another.

Started by Tim W in Performances, How to Play, Lessons, Concerts. Last reply by Timothy Hunter 13 hours ago. 3 Replies 0 Likes

Started by Tim Ahlberg in Performances, How to Play, Lessons, Concerts. Last reply by the anonymous pick 20 hours ago. 4 Replies 0 Likes

"power up the flowers!"
43 minutes ago

Brent Kasl replied to Brent Kasl's discussion Bridge Shapes over Piezo
"Thanks, I thought maybe the footprint matching the piezo disc would equate to better sound pickup…"
49 minutes ago

Music builds community, and so this is a group of people who want to share music with one another,…See More
1 hour ago
74 Comments 0 Likes

"Nice guitar pickin, sliding and images to Hoodoo this Hoodoo Dude. Thanks Andries."
1 hour ago

"Thanks guys. I got home from Monday Music and Yanis went to bed. I was charged up and started…"
1 hour ago

Taffy Evans replied to Brent Kasl's discussion Bridge Shapes over Piezo
"No offerings yet Brent? Oh well its me again.....I think the answer is quite short and simple, very…"
2 hours ago