I just dealt with the nicest guy buying boxes. He's in Bundoora in Victoria. I bought 10 boxes from him all good sizes. $8 for dress boxes (Romeo y julieta etc) and $10 for solid cedar raw or lacquer finish. I'm in sydney and he went to some trouble to keep the postage costs down. $25 for all 10 boxes. Cant speak highly enough about how ready he was to help and give me options on the type of stock I was looking for. I told him how happy I was and that I'd give a rap on this site. Drop him an… Continue

I've recently had a major change of direction in my builds. I've turned away from the shiny graphics and modern electronics, and I've headed back to the roots of Cigar Box instruments. I'm talking Vintage Antique boxes. Example; my latest build, a Vintage Harvester Ukulele. Starting with a depression era, "NRA Stamp" box, and a hand carved set neck. No Electronics, just simple old fashioned acoustic sweetness.

I've just about given up on through neck builds. A through the box neck…

My latest build, "Mandolin-phi", is a re-interpreted "f" style mandolin in the cigar box tradition. The body proportions,inspired by the golden ratio(phi), incorporate a "paisley" sound hole as a nod to pop/rock culture. The aluminum bar, laminated to the neck offers dimensional stability and extends through the headstock phi symbol. A tele neck pick up and piezo in the bridge provide a variety of tonal options.

I used stain on my fretboard, what should I seal it with??

Excellent book about the history of diddley bows

Guys, if you have any interest in diddley bows and the history of instruments check out this fine book by Phil Thomas. The link takes you to a free ebook that's quite informative and interesting. His video Desert Surfin' has…

Started on the neck and cut some strips for the linings.

Had to drop the exposure, even then it is hard to see how I cut the kerfs in the linings. I use a piece of wood with a slot cut in it to limit the depth of the cut. You have to have all the pieces the same thickness to get the same depth of cut. I dimension them…

Clamped up the ends.

I have spent and spend a lot of time searching for STUFF to adorn my CBG's I can't walk in a department store with out scouring the walls and shelves looking for the next great IDEA. My wife thinks I'm crazy. says I have too many CGB's. When I am looking on e-bay for parts ,the longer I look the better deals I find . Most of the wood I use is reclaimed lumber , I'm buying Cherry and Maple at give away prices. There is a store here that sells metals hard woods, overstocks,  cabinet doors ,…

Bent up a sides today. Did it by hand on a pipe being paranoid from breaking it yesterday. Seems Tightbond Original did not like the amount of heat or steam I had to use in bending the side.

Once I had it clamped this much I was not going to give it a chance to spring back on me. Put a wet rag on it and…

LESS THAN A MONTH AWAY ! WIN A SWAMP WITCH GUITAR .

You can WIN the St Louis 2017 fest swamp witch 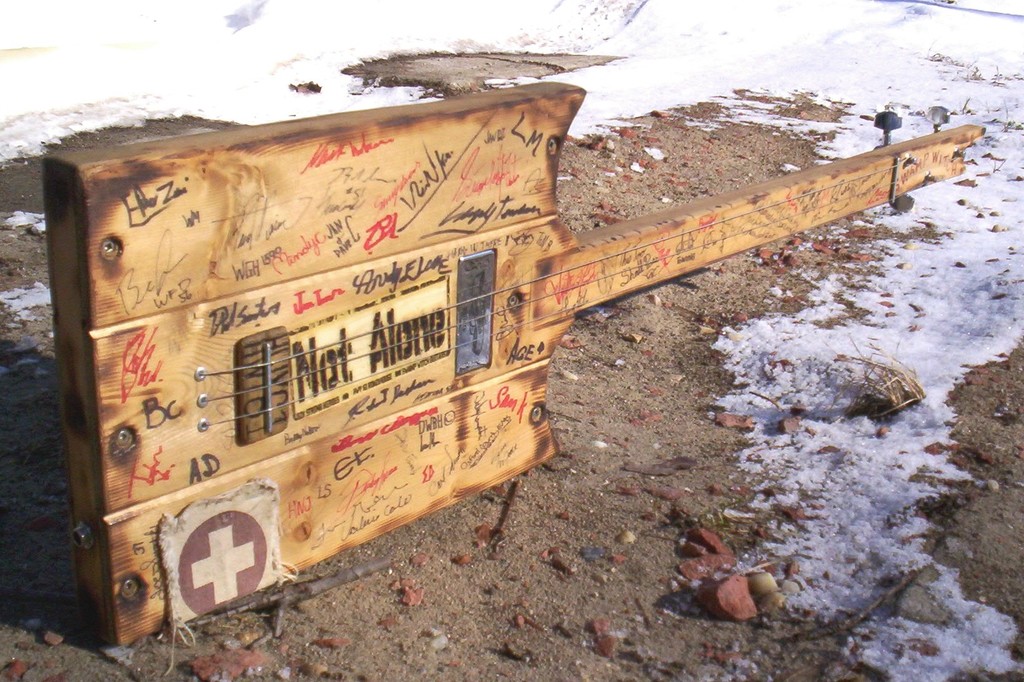 THIS YEAR THEIR CHARITY WILL BE
SIX STRING HEROES.

They honor and assist injured U.S. military veterans suffering from PTSD through free guitars and guitar lessons.
Healing through music . The…

Oh I hope I do this right (bending sides)

Thought I would post this before I bend them. No plan B if I mess up.

Managed to get the pieces all joined without too much stress. Being that I had many joins to make and I did not have much in the way of extra to sand out if they were not close to perfect I modified my process. They turned out fine so now the next stressful operation, bending the sides. Softwoods do not like to bend much and will crease and crush on the inside turns. SuperSoft II really helps out from the one…

Had to use a right angle jig and sandpaper to joint the sides, the jig I usually use was not long enough.

Doing the top and back pieces with my router. I but the joint edges against the bit and run the router along a straight edge. A bit of fiddling to get it set but I usually come away with a good glue…

The Mark Twain cigar box would have benefitted from a piezo pickup because it was pretty cool, but I sprayed it with several coats of lacquer and tried to keep Twain's face intact at…

The 2x4 was a little damp and gummed up my blade. Have a fan on them trying to dry them out. Cut the 2x4 in half and resawed one for backs, tops and linings. Cut two lengths for the sides and that left about a 1" board to make the neck, braces and stuff. Think I am going to make an 00 sized guitar, aprox. 19" body length, 14.5" lower bout.…

I saw the post on making a ukulele and I thought I would like to do it, a simple build that won't take too much time. I was suppose to make one at a uke forum when they had a thread on building them. One thing lead to another, I glued a couple of pieces of wood together for the neck, put it aside for a different project, will have to show you guys that one when it gets going. Looked through my stash of 2 x 4's, I have kept my eye out for any that would be half useful to build an instrument.…

"Hoodoo this spell on me?"
3 minutes ago

"Talent is the ability to play almost anything...you own it!"
7 minutes ago

"Looks nice naked!, a light stain and a clear lacquer instead of paint!  :-) "
9 minutes ago

"way different than your usual jamin...I like it!"
10 minutes ago