How Cool Is This

I am always amazed at how much people can have in common. I've decided to learn about and play some songs done by Etta James. Well after some checking I found her real name was Jamesetta Hawkins and was changed during her career. Which is totally cool. But mostly because my mother was a Hawkins. AND her mother had a sister named Dorthy which was Jamestta's mothers name. Isn't is cool how much people can have in common and not know it :) Maybe it's a sign. :) A sign that I'm on a good path…

I have totally fallen for Etta James. So I'm converting some of her old stuff to more modern acoustic blues. Any chance anyone has sheet music for any of her stuff? I'm working on I'd Rather Go Blind first. :)

Since, I have been learning the CBG I have surrounded myself in things I believe will keep me on track with my learning process. One of the things I have done is expanding my music collection to include Blues artists and groups. With that I wanted to ask those here. Who inspires you? What music inspires you to create and play? I would love to add your favorites to my private music collection. Thanks Earth

Item of my Cigarbox guitars on Dutch TV program

Tonite on Dutch TV program 'the Social Club" there was an item about my cigarbox guitars which was recorded here at home and the gig was recorded in the 'American Roadhouse style' cafe, were we also will have our 1st Dutch Cigarbox festival on 6th of September.


Camera team recorded many different of our (own) songs, but for some kind of reason, the director choose to broadcast the song that I play on my own build dutch hubcap guitar. It is a song most of you probably know…

What a great weekend!

Thanks to everyone who came by our booth at the Rockbrook Village Craft Show on Saturday and the Aksarben Village Farmers Market on Sunday! A great turnout both days. And the weather was perfect was it not? I appreciate the folks who saw the uniqueness of these instruments and made the purchase. I hope you enjoy these instruments whether they hang on a wall, sit on a shelf or get played wherever you take it. Keep looking for us at Aksarben Village Farmers Market and the Old Market Farmers…

Today I have my first road trip since I started learning cbg and of course I'm taking it with me. Within a few hours I will be jamming someplace else. But I had a cool idea while I was deciding to take my cbg with me. Why don't I have pictures taken of me with my cbg everywhere I go. So that's what I'm gonna do. I kinda wish I had an ole Blues hat to wear when I did so I could look the part but I think the closest I have is a dread cap :( But on Day Five it's my first outting with the cbg…

My 10 Ten Reasons To Play A CBG 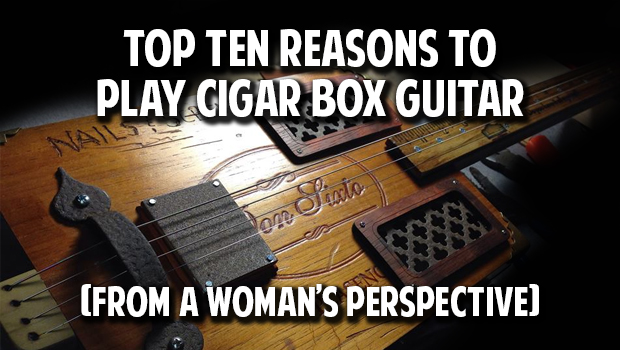 My Top 10 Reasons For Playing The Cigar Box Guitar

10. Playing a CBG saves you money on strings.

My photo taking ability needs some work.  This last group of pictures just don't do #4 and #5 CBG's justice.  I find it hard to get a detailed picture of the complete guitar due to the length.  Oh well, here there are.  On to #6.....

Day Three and all si going well. On Day One I learned a rift or sorts. On Day Two I learned 12 bar blues. Oh yeah, and half of "Bad To The Bone". Course I had to change the lyrics to make it come from a girl but that's fine by me. Today I'm going over everything I have already learned so I retain it. And well leave whatever else I leave up to you guys. I wanna hear your ideas. Throw some fun links at me or post your idea. :) ~Earth

The box is so small that it don't smash your boobs. :) It fits comfy right under them :)

Officially going into day two I find myself reminded of a few things  while, having my morning coffee. Having been in or around the music industry for what I personally consider, way to long. I always found myself worried about playing everything just right and not missing a note. Well, I am here to officially say... "Screw every little note. Forget rests, maybe I always personally thought there should be a bridge there. As a matter of fact... FORGET MUSIC. FORGET KEYS, AND TEMPOS. I want to…

In my first official day of learning the cbg I have learned one thing. And well I think that thing is very important thing. I have learned that cbg may be the ONLY musical based thing I have discovered that encourages people to make noise no matter how horrible AND last  but not least to play things how your like them not how everyone else likes them. I love it. I feel liberated. The world as I know it may just be in for many weird, exciting, rude awakenings.  I am going to be as nutty as…

KOOL DOG HOOCH replied to KOOL DOG HOOCH's discussion Building a micro shop for the work area challenged!!
"Thanks Tim, I've been watching all kinds of videos searching for guidance of some sort. I had…"
8 minutes ago

Timothy Hunter replied to KOOL DOG HOOCH's discussion Building a micro shop for the work area challenged!!
"nice one KDH. going to watch these in full when i get a chance..the track for the circular saw…"
48 minutes ago

ChickenboneJohn replied to Sean Murphy's discussion Table saw for fretting, blades, and power
"You say that you want to go for a powered fretslotting setup for speed and consistency of depth.…"
3 hours ago

"Ditto Poorness' comment, one of your best, perfectly suited to your style.  :D"
4 hours ago

Paul Craig commented on Shane Speal shanespeal.com's group Building a Cigar Box Guitar 101
"Gary Mullens, we can't respond to those emails because the site doesn't work that way.…"
4 hours ago

Back workin on the " Wicked Brother " ..bone slice build #2