Sorry for the double post!....I just wanted to share this. I will be making more hand made cigar box guitar pickups, I thought I would post here as I am making them in the next upcoming week. They will all have vintage Americana and Tobacco themes and will be for sale.

Here is a short video of them. If you sell guitars you can add value to your instrument by adding…

iv'e not been on for a few, anyways i been steadily learning and building on my four stringer and she's about done. i had a few setbacks where i went to drill holes in the fretboard and the holes splintered into a mess but i fixed that problem with overlaying an 1/8 thickness board after sanding the fb clean next i just need to add fret markers which they have to be a bit on the thin side so i'm figuring on using silver colored bailing or crafting wire... the look i'm going for this being my…

So this weekend I built number two - a diddley bow made from a broom handle and a Henri Wintermans box.  The box cracked when I was putting a sound hole in but I think it improved the look of a pretty boring box.  I stuck a piezo in there and strung up with a low E.  … 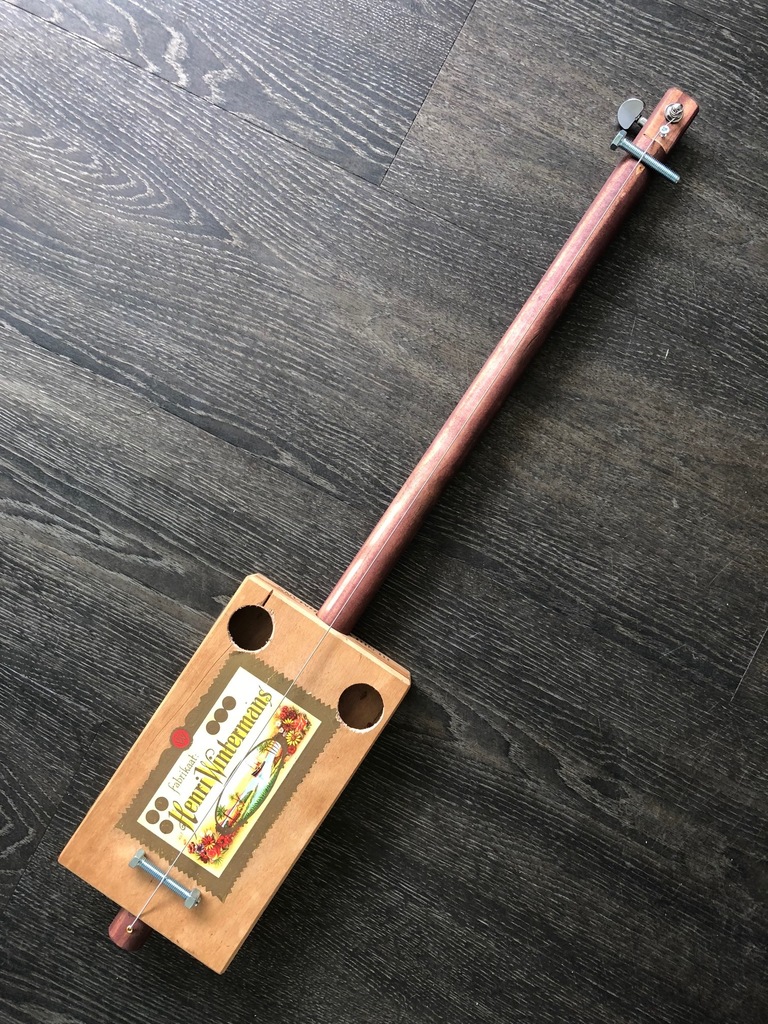 Just been busy with other projects and things. ..  cleared out of a storage unit, prepping yard sale type stuff to sell at swap meet.. figuring out soap recipes. getting an ebay store started...

Just wow I miss this stuff.. need to build something this week just get that groove back.

I should share this, because much of it was shared with me- and it has helped me enormously. I've been building these things for less than a year, and I now find that each new instrument I finish plays like a real guitar. For the love of Gitty, some of them may even be saleable... Anyway, here goes.

I was initially shy of showing my builds to my friend S. Not only is she a skilled carpenter and fully qualified boatbuilder, she does not suffer fools gladly either. But she was really…

Just finished Jasper,my first build fueled by an interest in luthiering that began while researching Fallen Fret, my novel of the blues. A subsequent viewing of the cigar box movie led to my determined effort to build a CBG. Used my long-dormant finish carpentry experience with a few curse words I finally put the strings on yesterday and savored the first twangs.

I built the neck from a spare bottom stair rail. Fretboard came from a planed-down dresser drawer; I'd noticed the…

Here's a pic of my first attempt at a CBG.  I built this at a workshop by a local guy Cigarbox Sounds.  Great workshop and I came away with a playable fretless CBG. 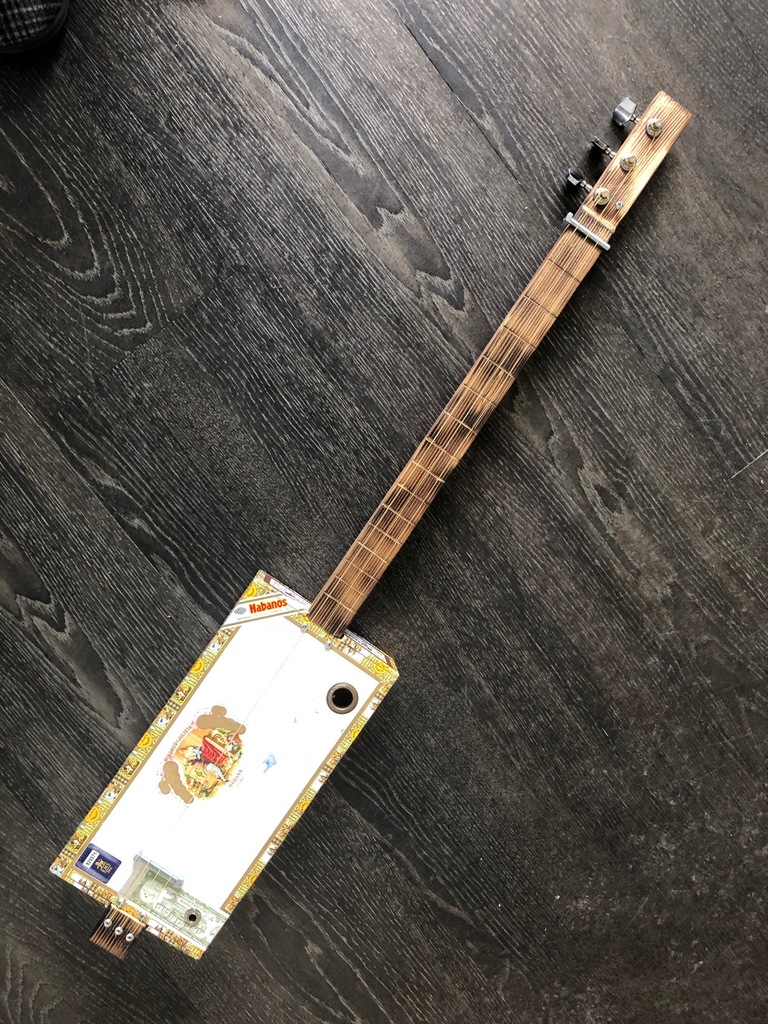 Swamp Witch Guitars built me this tribute to my friend, Wesseh Freeman.  I review the guitar and tune it to "Wesseh Tuning."

I just recently finished a 3 string and it seems like the strings are a little hard to fret. I have it set up on a 25 inch scale, if I move the bridge toward the neck will it make the strings easier to fret without sacrificing tone quality? It plays great with a slide. I am also wondering if I might have the frets set too low. I am using an 8/32 bolt for the bridge and a bit smaller bolt for the nut.

Does anyone have a theory or rule of thumb on sound holes?

She is now 19, graduated from high school with honors. Attends the local ATC perusing a cosmetology certification and later into theatrical arts.  Has earned several scholarships to pay for her schooling.

Learned to play the Cello at 13, that's when I went out and spent a small fortune on a full size Cello for her to grow into and perfect. She had the best professor as an instructor who pushed her to find her natural element with the Cello. A prodigy  in the strings. Cello, Violin,…

Besides raising a family of 4 kids here, keeping the fleet of rides on the road, fixing the house, dealing with work, the list goes on, as with the rest of every other person breathing air. But what makes our free time more exciting is taking the time to learn how to build unique musical instruments.

Hats off to all you Luthiers taking the best challenge in your lives. Creating a legacy that will follow you forever, or until someone in the government takes out our history annuls.…

This will be my third mandolin restoration in the past 6 years. I keep finding these discarded and abused by several owners. Most people think these instruments are toys and treat them as such. My challenge is ahead of me now. Split head down the peg line, warped neck, but to the body too thick by at least a 1/4". Cracked tail section, missing support arches on the back shell. This old ghost has been hammered and others took the time to try to mend it. Now its called a wall hanger by…

Can anyone tell me a “good” way to remove the Surgeon General label off a cigar box? 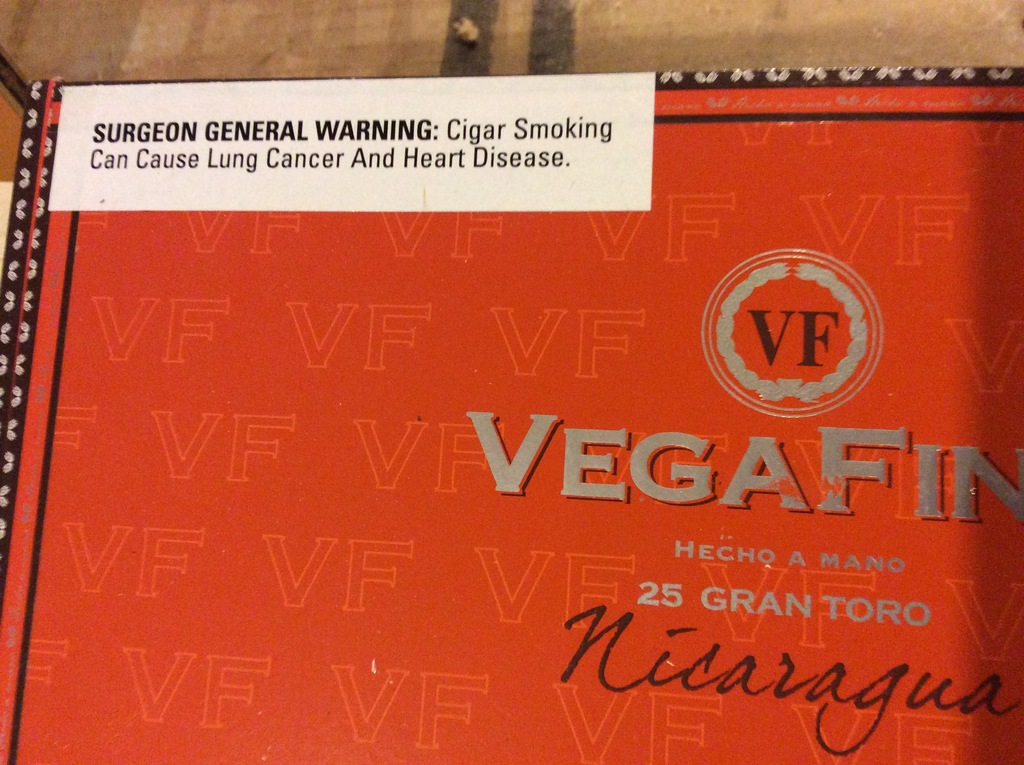 In open G tuning is there a trick to make tuning the low G string  easier. I am using a A string for it

After finding this site and watching Shane Speal videos, I made myself a challenge.... to build a CBG without spending a cent. Well, I did it. The box is floor laminate, the neck is a broken table top trim-off. eye-bolts for tuners, pop cans for sound hole covers, misc wood scraps and other parts from the junk box, stole the strings & strap from an old acoustic. Other than the $13 piezo/pot kit from CB Gitty, I did it with out spending a dime. …

Here's a drawing and photo's of the construction of a guitar using a Wolseley hub cap.

The neck is made from three pieces of 1 1/2" x 1" mahogany,the body from 1/8" birch ply with a hardwood tail block and lime wood linings.

The guitar is finished off with a walnut fingerboard and laminated walnut/ply bridge,stainless/cycle brake cable  tail piece anchored on the strap button.…

Started by Tim W in Performances, How to Play, Lessons, Concerts. Last reply by Timothy Hunter 11 hours ago. 3 Replies 0 Likes

Started by Tim Ahlberg in Performances, How to Play, Lessons, Concerts. Last reply by the anonymous pick 19 hours ago. 4 Replies 0 Likes

Music builds community, and so this is a group of people who want to share music with one another,…See More
20 minutes ago
74 Comments 0 Likes

"Nice guitar pickin, sliding and images to Hoodoo this Hoodoo Dude. Thanks Andries."
36 minutes ago

"Thanks guys. I got home from Monday Music and Yanis went to bed. I was charged up and started…"
43 minutes ago

Taffy Evans replied to Brent Kasl's discussion Bridge Shapes over Piezo
"No offerings yet Brent? Oh well its me again.....I think the answer is quite short and simple, very…"
1 hour ago

"Thanks Nancy, it's sad even the mosquitos are important to life."
1 hour ago

"Thanks Keith ! thanks for liking it ! appriciated !"
1 hour ago