More inane abuse and a gig....

So, Ive played a few more gigs with the cigar box and the 'hilarious' comments still get wheeled out. ' Where did you get that ?, Is it real ? ' Then you play it and the clowns with the big voices shut up...ah well, goes with the territory.

If your in the Studley area on the 15th of this month, check out the Royal Oak pub. We are having a Cigar Box evening, including Chickenbone and a ' special guest '.

My first attempt to build a Cigar Box Fiddle. I would like to craft everything myself, even the fingerboard. Hopefully the sound justifies the effort..

I got this old balalaika from my grandma and after a closer look I decided it needs a new finish. I mean it was in a horrible condition. There's a sticker inside that says 1982 and something else in russia. Im pretty sure it says "No sandpaper was harmed in the making of this instrument". If you think chinese guitars are bad quality you should see these. Anyways here's a few pictures before the re-finish.…

This cigar box guitar caper has pretty much taken over my time nowadays...although nominally I still have a day-job...it's very much in the background these days.  I managed to get a late booking at the Barnsley Guitar Show...so pressure is on to get some stock made..but how hard can that be?.... 8 or so guitars and half a dozen stompboxes by the end of the week.

First priority however: I had to make sure I had 24 guitar kits ready for Malc's workshops at the Sweeps festival...so I…

About a month ago our computer was playing up, so I called Andy our 'Computer Whizz' and asked him to come round and take a look. Remembering that Andy plays guitar, I invited him to have a go on my CBGs. Well he was mightily impressed. ( Humility dictates that I confess, 'none of them were built by me!')

This morning our computer was 'having issues' again (old age!) So I made the call and Andy arrived a short time later with his bag of technical tricks AND his very own…

What I've learned in ~18 months of building 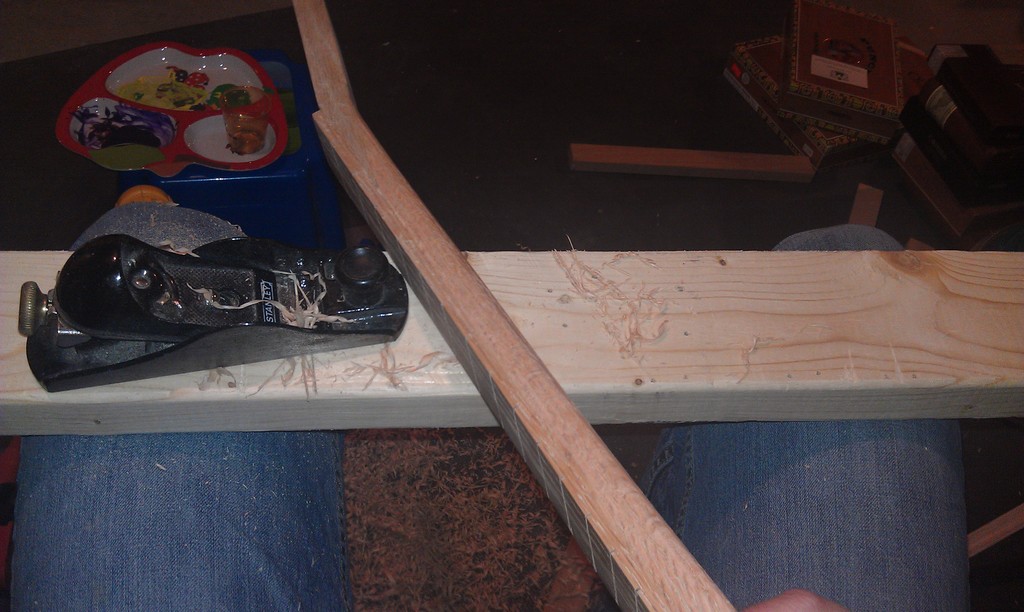 So while I was sitting at my favorite workbench the other night (2x4 across my knees while I sit on an overturned 5 gallon bucket) I was thinking about what I've learned over 10 or so partial and complete builds.  And the major thing comes down to these hard and fast RULES of making a CBG.

Another Sunday, gigs just played Friday and Saturday. I took the Cigar Box for the first time this weekend and played an hour each night on it, the other two hours regular guitar. We started the set with some CBG, standards like 'Mojo Workin' and 'Shake your money maker'.

What seemed consistent though was that the second the instrument was produced, on both nights, several large and mean looking men looked at me and said 'WHAT THE F**K IS THAT' !!!!! 'YOU CANT PLAY THAT' !!!! 'WE WANT…

The Keeper of the Flame

The rented Mustang was churning up large pieces of the road in south memphis, as the sports car was headed with it's occupant south towards Mississippi.  Tyler "skywalker" Jones had rented the car as soon as he arrived earlier this morning in Memphis - since he had a few days before his concert at the FedEx Forum: and promptly headed south towards Clarksdale Mississippi....Home.

Tyler Jones didn't have the radio on in his car, because the truth was; he didn't need it.  He was…

Well my to books from Amazon arrived:

Stopped into my Local Cigar shop and talked with the owner.  He has a crazy a mount of boxes.  We struck up a deal,  He would like 2 CBG's one for himself and one for a distrubitor friend.  I told  him no problem.  CBG are a new animal to me... after picking Banjo and Pickn sticks…

Pro Bassist Kevin Dore joins the Leadfoot line up!
Kevin is a phenomenal musician with a wealth of experience. He has toured the world with the Geoff Everett band and supported the likes of The Hot House Flowers on a USA tour. He has also lived in both New York and Miami living as a talented session musician.
Kev will use his talent and experience to focus on developing the Leadfoot sound and experience into a Raw Live Grit & Gravel Foot Stomping Blues…

Hooked up with Kevin Dore - Pro Bassist yesterday for a jam and to work on a Leadfoot collaboration. Kevin is a master musician who's toured and supported in the UK and USA some fantastic bands / musicians. Kevin's talents and driving bass lines have really raised the Leadfoot bar, filling out the sound providing more grit and gravel. We are now working on a set for live performances. I'm really excited about collaboration and fuller sound - Gigs coming soon!

It was payday Friday and warm for March. Ray pulled on a pair of jeans, cheap tennies, his Howling Wolf tee-shirt and a faded orange cap. He strolled three blocks to County Hospital.

Used to be, Ray was the lead housekeeper at County. Now he was mostly retired. He still worked a day or so a week, mostly, doing floors. Ray was a wizard with floors.

New to the site

Thanks for the feedback on this one. It's one of those things, you play it and it feels good, churns the guts, hits all the right things personally, but you never know how other people might respond. The mojo bow is the ultimate in back to basics I think, it tests you in so many more ways than regular guitars.
I can honestly say that stumbling into the world of cbg and the mojobow is the most fulfilling musical thing I've done possibly ever.

Started by the anonymous pick in Performances, How to Play, Lessons, Concerts. Last reply by Taffy Evans 5 hours ago. 13 Replies 0 Likes

Started by KOOL DOG HOOCH in Other stuff - off topic, fun stuff, whatever. Last reply by Jerry Jordan 8 hours ago. 1 Reply 1 Like

3 String Guitars replied to James Pobog's discussion Necks
"try hickory, you can make it thinner and its trong and sounds great!"
19 minutes ago

"eye popper for sure. Nice work"
1 hour ago

"That is a beauty.  Nice balance between new and patina.  Love those f hole louvers."
3 hours ago

"This is certainly among my top few fave videos.  Thanks, guys,"
3 hours ago

"So beautiful Gary. Thank You !"
3 hours ago

"Wow Capt. it’s beautiful and sounds terrific. !  You are the Master."
3 hours ago