Another busy week...plus the X-Factor comes to a pub near you...

Busy this week getting ready for guitar shows and school projects...but managed to fit in an open mic hosted by my keyboard player Freddie Pirotta. Who should turn up?.... Freddie's old mate Wagner Carrilho from the X-Factor. Say what you want about Wagner, the crowd loved it...ah well, that's what a brief bit of telly fame does for you!!! 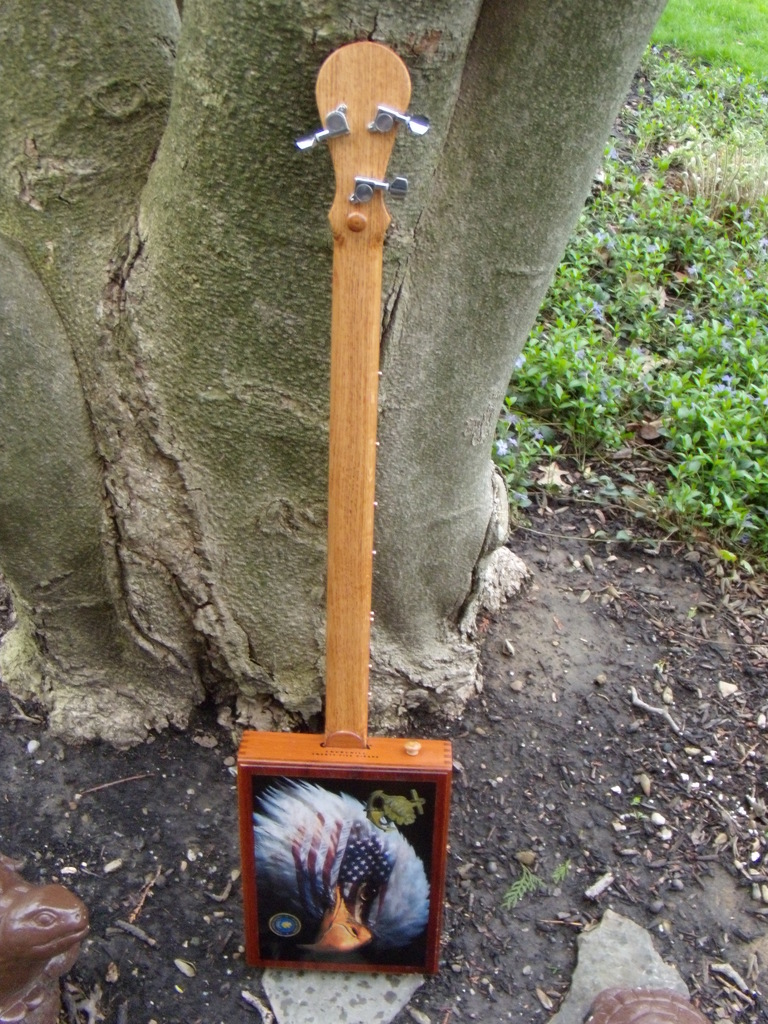 LT Virginia Sullivan's three-string CBG has been shipped to her in Afghanistan.

Here is a photo, but if you're interested in more, and some details, go to my blog http://totalrojoguitars.blogspot.com for a look.…

In the Part 2 lessons for 3 string CBG, I retune the GDg tuning to ADf# tuning.

In the lessons, I explain a system of movable chords…

What did YOU do this weekend?

It all started on Thursday night.

I'd corralled a couple of friends into coming to see Hillstomp, from Portland OR.  Those boys flat out kill it!  Henry playing the banjo, guitars and cigar box guitar, John playing the "drum" set (which is cobbled together from old radiator parts, plastic buckets, maybe a legit drum or two, and a shitload of duct tape).

Got to talking about 2 man bands, and the possibility of my two-man band opening for them.  So, we'll see…

HEY EVERYONE! DO YOU LIKE CIGAR BOXES? WELL WE HERE AT AVALON DISTRIBUTING HAVE PLENTY FOR YOU! WE ARE A PART OF BILL'S CIGAR WORLD , SO WE WON'T RUN OUT! IF YOU ARE INTRESTED PLEASE CONTACT US AT ....… For details go to my blog http://totalrojoguitars.blogspot.com/.

So I have built a number of cigar box resonators. Last Friday I had a chance to meet Husky Burnette and get his impressions of some of my builds. (Thanks Reverend Nix) What was cool for me is we sat around for a while with a number of my builds, he played them and we would talk. I think I had three resonators there one of them had a piezo in it. Husky had his amp in the car so I asked if he would try it out and let me know what he thought. Here is a clip when he first plugged in.…

Hey all you slide players out there. I recently got into geocaching (www.geocaching.com) and thought it would be cool to have a copper slide travel the world playing as many CBGs as possible. So i created one called Slide and Seek (TB40859) and placed it in one of my cache's. If you find it on it's travels please use it and take a photograph. I have posted a photo on m page.

It feels good I love working with wood to start with . And to be able to build a Cigar Box Guitar that's just better than snuff,

A while back I contacted Walter Reed Medical Center in Washington DC to see how I could go about donating some of my/our instruments to military personnel who were recovering from their injuries in the hospital. Oddly enough, their response was:

"We sincerely thank you for your sentiment and dedication in deciding to
have a positive impact on those in the Armed Services. However, upon
review of your application, it has been determined that we cannot
receive your…

I delivered my latest commissioned build of a six-string CBG and a Monster Amp today.  Rather than duplicate info, if you're interested please go to my blog http://totalrojoguitars.blogspot.com/ for a tour and information.

I posted this in discussions originally, but thought it might of been missed by some............So here it is again ! I got the idea for the fret jig when looking at DrByte's blog on how to make a scale fret template out of a aluminum Swanson yardstick obtained at Lowes.    I cut the yard stick in half and clamped the two halfs together. Then I used the metric side of the yardstick to mark the fret scale on.  Then took my Harbor freight japanese flush cut saw ( fret saw) and cut through both… Continue

﻿My 12 year old daughter brought home an assignment this past friday, seems they are being tasked to build home made musical instruments. And her choice was an up-right tub bass of all things. So, to break in our newly acquired, used shop equipment, we are building a tub bass as our first instrument. We found an old bed frame with some good wood and wares for the build just a couple blocks in the hood. The neck has a natural warp that will fit onto a 5 gln bucket for the tub. My daughter was…

Just want to say that I really like Cigar Box Nation. I am an inexperienced builder and I've received allot of help from many different members. Everyone I've talked to wants to help and have good ideas. I have never built an instrument or even played one before and through finding this website I have a renewed interest in woodworking and a desire to learn how to play music. I just wanted to say thanks Nation for all your help. I am glad that I am apart of… Continue

"way different than your usual jamin...I like it!"
23 seconds ago

"The Digits are "Walking the Walk", and Mr Lynas is "Talking the Talk", a…"
21 minutes ago

""Thanks Jerry, Poorness, Bob, and Dave, there are more Slides, but this is the pick of the…"
30 minutes ago

Looking for some idea/device to help with barre chords. Got old, painful hands.Seen a couple, on…See More
1 hour ago
0 Comments 0 Likes