Beginning of an Addiction 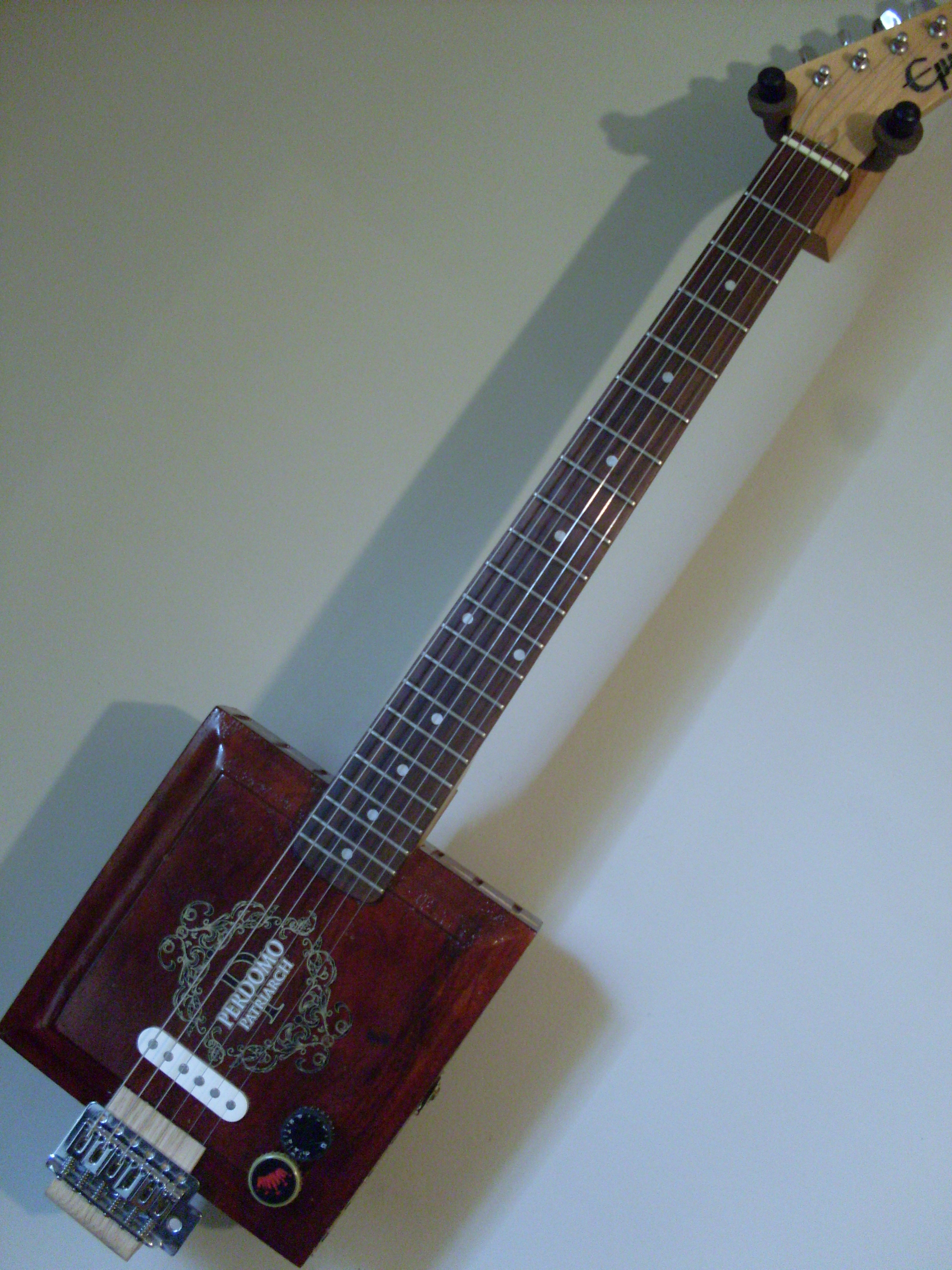 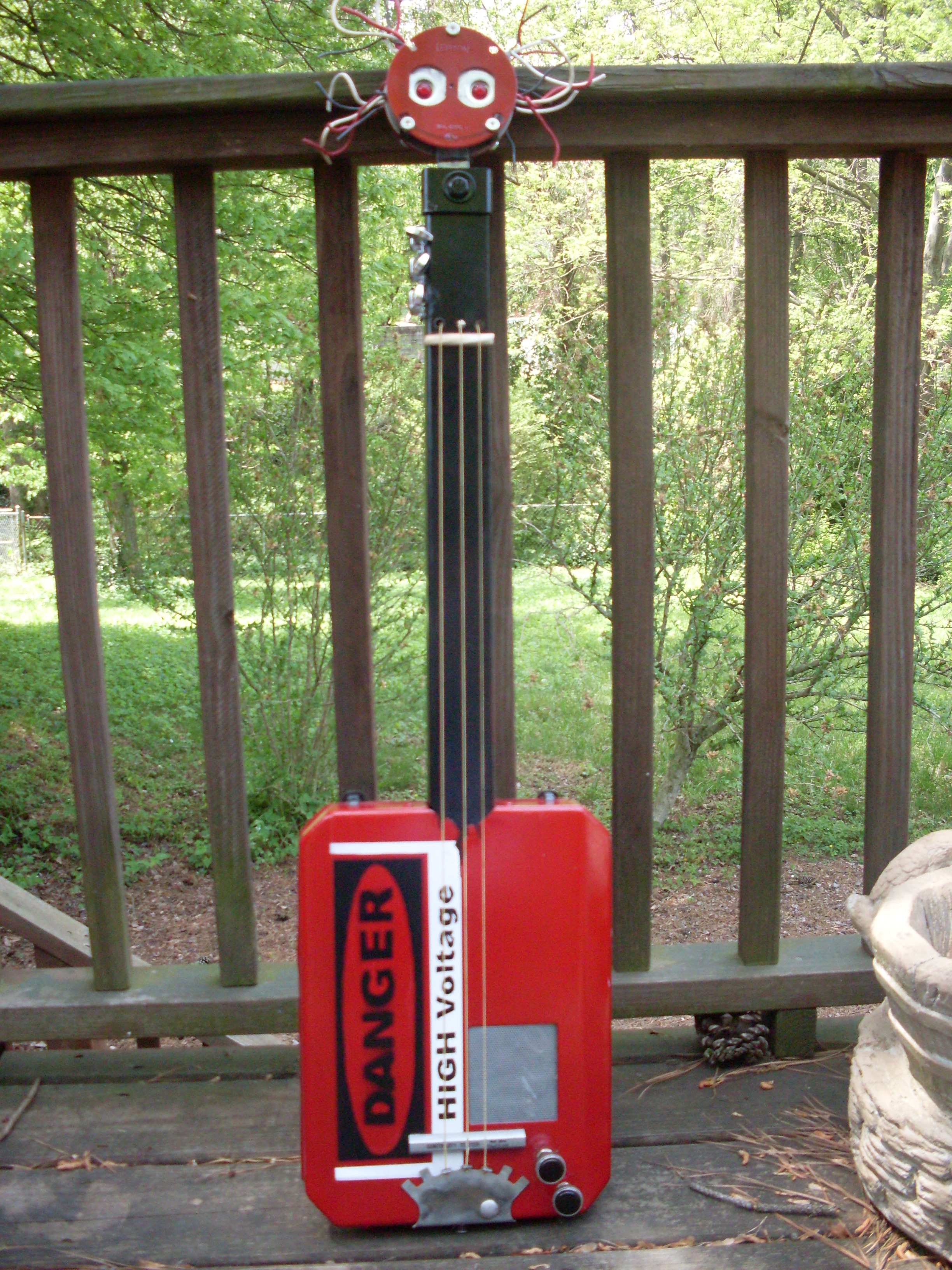 I added a new song I made up last week on my new 4 string CBG, just finished it today. A little rough as far as the electronics , I need to find a nice 4 pole pup for the guitar then I could really rock. The piezo is not bad but would really like a better pup for it. Anybody getting rid of one let me know.

My Co. name has been Raging Rog Banjo Co. for over a year now,,,,,,,
But when the economy shut down the banjo biznssss shut down too. But its a good thing because I really didnt enjoy building banjos as much as I thought I would.When I built my 1st CBG now THAT I enjoyed!!!!!!!!!
So, as of this week my new lil biznsssssss is now called ,,,,,,,," YES YOU CAN!"
My sign sits beside my table set up I use at the shop to display and play on.
People come up and say " yes I can… Continue

So the more I looked at the area where the strings would touch the top of the box, the more I didn't like it. So, I decided to add a fingerboard and see what happened. I found some 1/4 inch red oak and poplar at the Home Depot that were perfect for the job. The 1/4 inch was just enough to raise the fingerboard high enough to make it more playable and resolve the problem with the strings touching the box.

I used the poplar, thinking that it would give the overall look some contrast. I… Continue

Well, I finished up the first prototype CBG. I still need to put a permanent bridge and nut on it, but I have a friend coming over who plays guitar to check it out and make suggestions as needed. Once we get the action figured out, I will replace the bridge and nut with permanent ones and glue them down.

I did notice that if I play a note much farther than about halfway up the neck, the strings will hit the edge of the cigar box lid. I moved the bridge around a bit to eliminate some… Continue

"Songs Inside The Box" at On Location: Memphis film festival

"Songs Inside The Box," the cigar box guitar documentary will be shown twice during the On Location: Memphis International Film Festival. It will open a special block of film for seniors on Friday, April 24th at 12:30 and it will also be shown on Saturday, April 25th at 5:00 p.m. Johnny Lowebow, a Memphis cigar box guitar builder and musician will be present for both screenings to show off some of his instruments and play some of his music. The festival will take place at Malco's Ridgeway Four… Continue

As I started dry assembling my CBG, I found some of my mistakes. I mis-measured the length of the neck that needs to fit inside the box, so my holes and rivets for the strings were now in the wrong place. It would have worked, but I didn't like the way it looked. I re-measured (thanks Bob Vila, measure twice, cut once) and re-drilled the holes. This actually worked out OK because when I drilled the first set of holes, I hand drilled them since I don't have a drill press. (got to get one soon)… Continue

Awesome! I just bought my brother a Fender American Strat. He's been a Gibson player all his life. He got into acoustics and got a Tak and a Martin. I think now is the time for a new addition to the guitar collection.

I paid a visit to Ace Hardware for some supplies. I found that I could use some pop rivets (Part # 2014041, 1/8") and knock the pins out of them. If I take 2 of the remaining sleeves, I can put them into the string holes on the bottom of the neck, one from the top, and one from the bottom. They are just long enough to meet in the middle of the 1x2 neck piece. I can feed the string up from the bottom and the sleeves will protect the wood from the strings while being played.

Made a uke! no frets yet

A friend of mine posted a link to a video of Shane Speal playing some blues on one of his CBGs, and I loved that original bluesy sound! Since they seemed relatively easy to make, I thought I would give it a go.

I used to work at a cigar bar, so I know some of the folks there. I stopped in there Sunday morning after they opened and picked up some nice all wood boxes to start with.

I went to Home Depot and got a 9 foot length of red oak for the neck/s. It will be a really… Continue

It's been a long time since I have been active here, but I'm back now and planning some new builds, probably a cigar box lyre.

"Songs Inside The Box" on TV in Alabama Tonight!

And there is a link from that site to CigarBoxNation.com.

Jimmy Valentine is from Chicago, he got his first music lesson at the age of seven years old from rock and roll legend Jerry Lee Lewis. When he was was 13 years old he got a couple intense music theory lessons from jazz legend Maynord Fergeson. Jimmy also studied music with legendary Chicago saxaphonist Ivan Lasso. Lucky to have grown up in studios and theaters in Chicago, where he got to learn music from many legendary and world class artists. Jimmy records his music spot on live first… Continue

Eureka Springs Ark. I'll be conducting a cigar box guitar workshop as well. Lots of jamming and hill country blues at this fest, no poseurs or rock acts that claim they play blues, this is the real deal.

I'll also be playing at the Deep Blues Fest in Minneapolis this July, if you're in teh area, stop by and say hi.
Bluesboy Jag

I find myself in the strange position of not being able to get enough of the cheap cardboard Cb's.It seems the public in this area will buy the simple little 1 string Didleys faster then I can dig up the boxes.
So here I am asking if any of you have too many of the cheaper boxes to sell me.
If so let me know and I'll buy what I can and pay shipping too if its needed.

I'm on the Radio Tonight

I have been invited by Jeremy Butler, the host of "All Things Acoustic" on Alabama Public Radio to come on his show tonight from 8:00 p.m. to 10:00 p.m. Central Time to talk about "Songs Inside The Box" and share some music by artists in the documentary. You can listen online at:

I'll be taking CDs by David Williams, Doctor Oakroot, Gerry Thompson, Kirk Withrow, Microwave Dave, and Shane Speal. I have no idea how much time Jeremy would like… Continue

Started by the anonymous pick in Performances, How to Play, Lessons, Concerts. Last reply by Andries D. EKER 26 minutes ago. 15 Replies 0 Likes

Started by Tim W in Performances, How to Play, Lessons, Concerts. Last reply by Cause the Blue rat 5 hours ago. 7 Replies 0 Likes

Started by KOOL DOG HOOCH in Other stuff - off topic, fun stuff, whatever. Last reply by Jerry Jordan 15 hours ago. 1 Reply 1 Like

"Someday when I become rich and famous I am going to own a swamp witch guitar. Love the sound of…"
2 minutes ago

"Poorness don't believe I have heard that one before. I love Johnny Cash songs. I play several…"
5 minutes ago

"Don't surrender to temptation Dave, Looks like that blonde in that photo is reeling you in.…"
9 minutes ago

"Nicely done Dave, some really nice pickin and good vocals, We still haven't gotten much of…"
11 minutes ago

"tellin ya AD you gotta watch those HOODOO women. Awesome job vocals and intrumental"
16 minutes ago