Hi. I'm new to this so please forgive the stoopid question. My first build is pretty cool BUT tends to play sharp when I am fretting a string. I don't want to bring the action down too far cos then it will be too low for slide. What's a good compromise. Any actual measurements of string height at nut and bridge? Thanks guys!

Here is how I do a simple piezo pickup

A trip to Radio Shack will get you the piezo and 1/4 inch mono jack. They are in a drawer case towards the back of the store and most stores usually have them in stock. The piezo you are looking for is the 273-073 and costs 2$ and the jacks are
#274-255 and are two for 4 You can also pickup a 25 or 30 watt soldering iron… Continue

Here is my blog.

Did not know I could blog here. So until I figure something out, check this out!

Watch my builds here. Don't update every day but when I do it's fun! 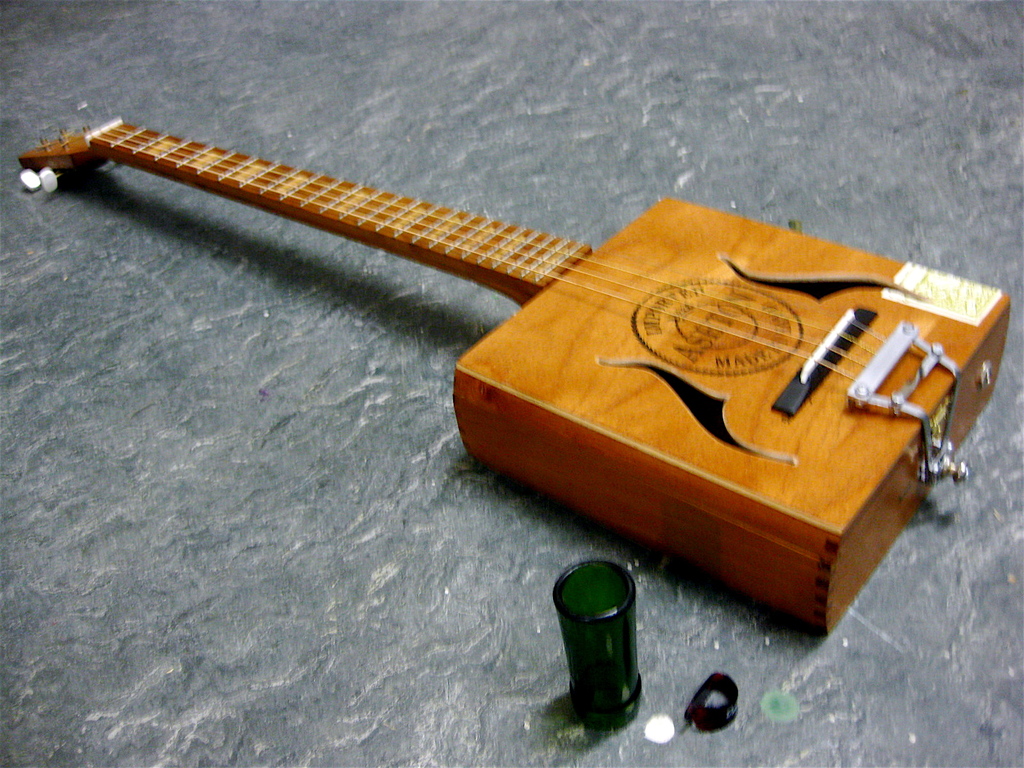 Inside of the lid... maybe I can sell this as modern art? … 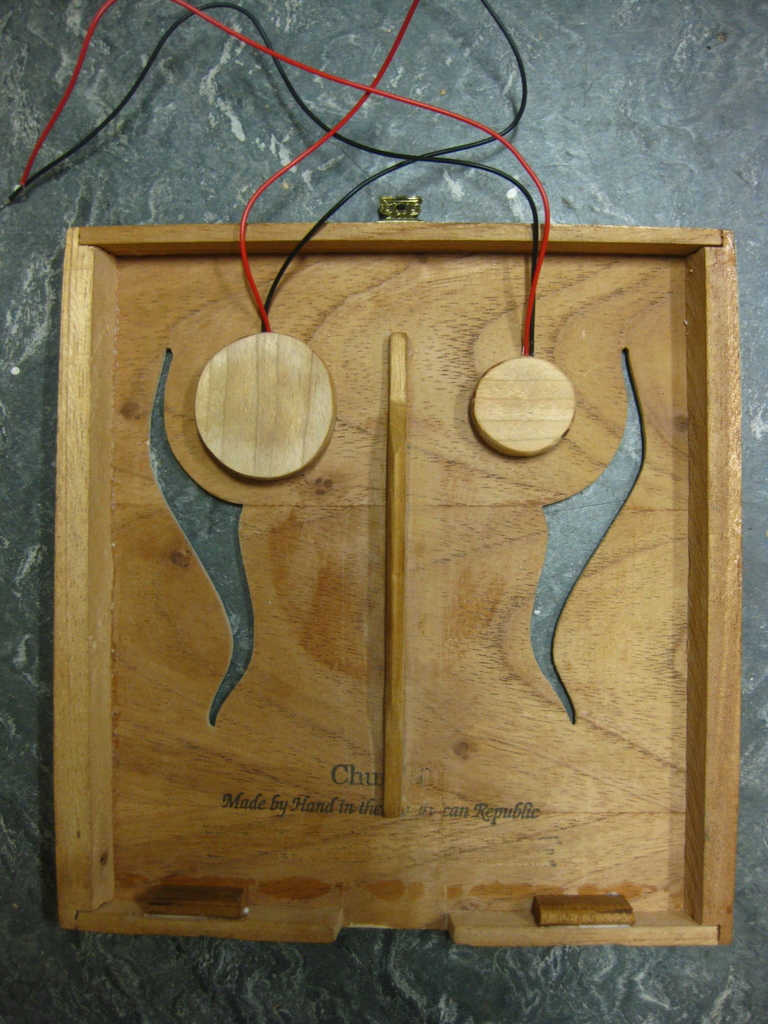 Are Musicians Snobs??? I don't know!

I have had a great deal of fun building instruments of different kinds but can't claim to be a musician. I had played the cello in high school forty five years ago and started with the harp in 1990. I quickly learned that the harp is a snooty instrument world. Its inhabited by long slender women with long slender fingers - quite a few men too. Mostly guys are harp builders and movers. I accepted my plight and muddled along. I tried a half dozen teachers over the years and learned that they all… Continue

Duh - right side up? While its not that important there is a tradition.

I literally put my tuning machines or tuners on upside down AND backwards on my first build. I had no clue there was a right way. After a comment clued me in, I went to Guitar Center and observed that their was a pattern that was always followed. The objective is to have them installed such that the string tension pulls the shaft into the gear instead of away from it. I am using inexpensive Ping Economy tuners and if I put them on right they stay tight. Backwards works ok but there is a… Continue

The best string sleeves I have found are simply pop rivets. I originally bought a small box of 25 from Ace Hardware and paid way to much. Next I found them at Lowes for about half the price Ace got but still cost me 4 or 5 bucks for a small box of a hundred. Then I found a box of five hundred at "Harbor Freight" for four bucks.

Here is the URL for these.… Continue

My shop burned to the ground in June of 2009. Nobody knows for sure what caused it - the fire dept asked me if it was electrical and I said I don't see how, since everything was turned off - so they put it down to electrical..... No insurance.
I had forty years and two hundred thousand dollars invested in that building and contents. I had spent a huge amount of time in it building and designing stuff, including half a dozen harps and all my patterns and jigs for building my harp designs. I… Continue

Hi all anyone out there got any ideas bout amp's that are controlled via the guitar ive been doing them switch to the speaker then to the battery and then the jack is there a better way ?

hi my name is cory wheeler i live in saint petersburg florida originally from portland oregon i joined up here because i got it in my mind to make one of them CBG's.. i am the kind of person who is not happy unless i am building some kind of project. I have been a musician since 10 years old playing in bands that range from blues to surf and played thousands of gigs... during the day i do electronic repair for local music stores it doesnt get me rich but i enjoy what i do so i guess that i am… Continue

They say that a fool and his money are soon parted. Man, I would pay someone a lot of cash to explain that to me.....

Today started out ok. Very tired due to daylight savings and early work hours, but work went by pretty quickly and I was able to get a lot of shop time in.

Made a lot of great progress, too. Got everything drilled out, tuners aligned, and everything was perfect. Now, I'm not all that great, and usually I'll get it "good enough," but when I say…

Hi folks i started a wedsite today not complete but on the way could you let me know what you think yor feedback means a lot thanks
www.bandanacigarboxguitars.com

Note: These lectures are intended to clarify and suppliment my instructional videos CDs. Series 5 (4 string Cigar…

dire srtaits on a three string

Just been wondering if anyone out there knows a way of playing dire straits on the three string ime not music note wise minded i just mess till i like the sound but it seems to me that this would be possible with great effect and would bring a great deal of admaration from peaple out side of the cigar box world.… Continue

Open letter to that Nation

DISCLAIMER: NONE of the comments below reflect those of Cigar Box Nation site or as a whole nor any of its members nor Shane Speal himself or anyone associated with him. These are my thoughts and opinions solely. I don't own the site nor am I admin of any kind. Please pardon the length whatever it becomes. Stop if you had enough. I warn you, its a manifesto. In fact, this might get me kicked off (I hope not tho). Rebut if you will. Its a free country. - WY

Had a dream about classes showing kids to building their own instruments (CBGs, flutes/recorders, stomp boxes (and other drums), kalimbas, etc.) and then teaching them how to play.
"Imagine..." - John Lennon

Sometimes you do find gold!

Well, It is safe to say I have the CBG bug something bad! CBG's have been on the mind for many many years. Now that the first one is out of the way, I have many ideas for more to come! I was asked to make a simple one for a friends mother for her birthday. Who am I to say no to that!!!!!!!??????!!!!!!!

I also have a 17 1/2" Edge box that I have had for some time now that I am still unsure in what direction to go with it! 6 string? 4 string? Who knows at this time!

Here is a quick google sketchup of a 2 degree neck angle. Started by the anonymous pick in Performances, How to Play, Lessons, Concerts. Last reply by Uncle John 20 minutes ago. 5 Replies 0 Likes

"Nice! That clucking hen is smiling at me."
1 minute ago

"Very nice.  I should make me one and learn to play it.  Nice simple design here, that…"
2 minutes ago

Uncle John replied to the anonymous pick's discussion Update on cbn member “ Maddog “ .
"Guys, I did not know Janet well, but think it would be good to tell you a bit about her and…"
20 minutes ago