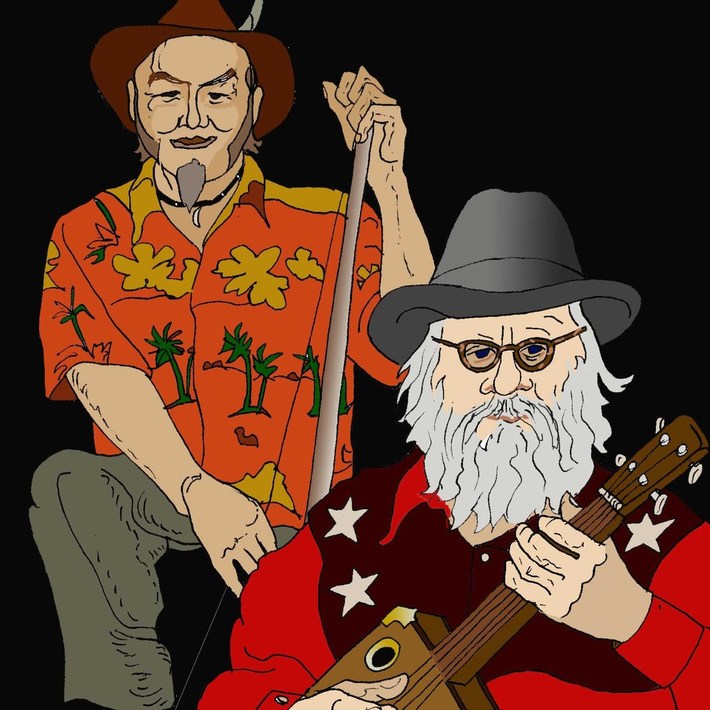 How did you learn about Cigar Box Nation?
Don Jack

For two weeks in November 2013 Cigar Box Don Jack exhibited his upcycled homemade instruments and his Artoons in IG:LuInverness, he also recorded an album, with the Rob Ellen and The Medicine Mobile.

So far we have played Northern Roots , Live at Troon, The BSA CBG, and Belladrum Festivals, weve provided crew for Tom Masons Blue Buccaneer Show at a Fish and Chip festival in Nairn, we've greeted the visitors in solemn fashion for Dying to Know, a conference on how best to put your affairs in order as well as playing The Scottish Parliament, entertaining the deligates for Abolition 2000, world wide anti nueclear conference. Its been a great adventure wich continues with The Adventures of Cigarbox Don In Inverness

Thanks for a great Cigarbox Don CD Launch, the good news is Don has had a word with his pal Cigarbox Santa, he makes Cigar Box Guitars to (and other toys) and is gonna drop by his wee hoose for a wee hoose concert for all the wee ones (and big ones) join us please

If you don't already have a ticket, you can grab one…

For two weeks in November 2013 Cigarbox Don Jack exhibited his upcycled homemade instruments and his Artoons in IG:LuInverness, he also recorded an album, with the Rob Ellen and The Medicine Mobile. Great you meet you guys at the BSA CBG Fest!  I had an absolute blast watching your show, and am proud to have had the opportunity to sit in on a few with you as well.  Hope to see you all again soon, and be safe in your travels :)

Very Happy to meet you on Nation...i love photos you posted...

MadGomer commented on Shane Speal shanespeal.com's group Building a Cigar Box Guitar 101
"Was wondering why I couldn't find Gary's comment and reply to it. Thanks for the…"
17 minutes ago

Moritz Voegeli replied to Sean Murphy's discussion Table saw for fretting, blades, and power
"For a workshop with poor infrastructure, I prepared a dozen of cbg kits, ready for assembly and…"
20 minutes ago

KOOL DOG HOOCH replied to KOOL DOG HOOCH's discussion Building a micro shop for the work area challenged!!
"Thanks Tim, I've been watching all kinds of videos searching for guidance of some sort. I had…"
39 minutes ago

Timothy Hunter replied to KOOL DOG HOOCH's discussion Building a micro shop for the work area challenged!!
"nice one KDH. going to watch these in full when i get a chance..the track for the circular saw…"
1 hour ago

ChickenboneJohn replied to Sean Murphy's discussion Table saw for fretting, blades, and power
"You say that you want to go for a powered fretslotting setup for speed and consistency of depth.…"
4 hours ago

"Ditto Poorness' comment, one of your best, perfectly suited to your style.  :D"
5 hours ago