This could be git related or not. So, what's on your workbench at the moment?

I have 4 scarf joint necks in different stages of work.

From what I've been told by some pickup winders is that the more steel used for the poles(Rail vs individual round or screws), it raises the inductance(measured in Henries). For example: Gretsch Humbucking Filtertron pickups have a steel retainer in each coil bobbin with large mass double row screw poles. The coil wire is probably 42AWG and the bobbins are thin and tall. Each coil only has a 2k to 2.5k DCR making the pickup register 4k to 5k, but their small size magnetic field, large Alnico 5 magnet and large mass steel make them have a very Ballsy attitude.

Then the Gibson Firebird uses short coils that are a bit wider and longer. No steel poles, 2 magnets instead(first models used Alnico 2 - later models used Alnico 5). The base plates in the originals were steel, covers were chrome plated steel and a extra steel plate was just under the coils. They were wound with more wire producing 7k to 8k DCR. These pickups also had a lot of attitude do to the Steel and using 2 bar magnets.

The Minibuckers used the idea of adding more steel poles(rail for 1 bobbin - screws and retainer for the other) and using 1 magnet underneath like a regular humbucker pickup. Result was a sweeter sounding pickup with A2 mag and a bit hotter with the A5 mag.

Pickups are simple in concept, but altering the amounts of some of the ingredients give different results.

Your 3 pole pickups, Do you make them just one set wind direction and one set polarity? Or do you make any RWRP pickups for a set?

I was thinking of building a clone of the Teisco Spectrum 5 guitar. it was a 6 string that had groups of 3 pole pickups. 1 was RWRP of the other and wired as a set like the Fender PBass pickups. With the flick of a switch you could have them in parallel or series. Fender used the same setup on their 12 string electrics.

I use Neodynium magnets on my pickups. The blade has a bar magnet on the bottom of it. The three poles are neodynium pole magnets. They are super strong magnets and I know that makes some sort of difference.

I have only done the three poles all in the same direction and polarity, so far. I have entertained the idea of trying the reverse polarity, or doing two opposite  windings, I just haven't tried it yet.

I built one guitar using the two different pickups with a three way switch. The three pole gives it the clean  and the blade gives it the crunch. Plus the mix gives it a nice overall volume punch.

My designs are rough, but that's what makes them mine I guess. The first one I built was hand wound, but I got 5.9K out of it. The two I wound on my machine were in the 3s and 4s.  It's fun to see what kind of sound comes from the different styles and resistances.

I have a set of Strat pickups made by a friend in the Ukraine and he uses Neodymium magnets, they sound great. He has made some humbuckers that come with changeable magnets to tailor the sound you want.

I bet your pickups sound good, I'll get in touch soon.

What, no celebration for 100 pages?

It would good if there was a way of having an index page, not just for this thread but any long running thread, say every 20 pages there was list of previous content.

That was my suggestion(s).

I noticed in the "Options" tab that I can add "Tags" to the thread. Guess I'll look into that when I get a chance.

on my current build, i'm using 4 Padron cigar boxes for the body. Longest one the main body, one for parts, and two i cut into triangles, leaving the hinges. i glued and reinforced thin mahogany pieces to make the triangular boxes (cut with the table saw blade way high) into boxes again, since they were missing a side. then my plan was to glue them to the main box.

Thus the dilemma and solution: i quickly figured out that even sanding the sides of the main box, the smooth mahogany of the triangular box's would not mate flush. so i got some balsa wood, 1/8 inch thick and matching dimensions to the side of the box. i put them on some wax paper, and flooded them with wood glue until saturated. i then used them in-between the box pieces, and clamped them tight. it was a bit messy, but the balsa wood acted as sorta a sponge, and formed itself to the irregularities. when dry it was just like hardwood pieces.

I think we need a picture of that to fully get it and appreciate it.

Do you think the box may have moved or flexed while you were cutting it?

Paul, it was not a case of cutting. Padron boxes have a 1/2'' piece to the hinges, which needs to be glued before the hinges are removed and the top separated. attached are some photos of the wings for the sides of the main box. it would have just been a case of removing too much material on the main box to get a smooth surface, thus the balsa. i'll post more photos in the future. I made the two triangular boxes into boxes themselves, for electronics, etc. 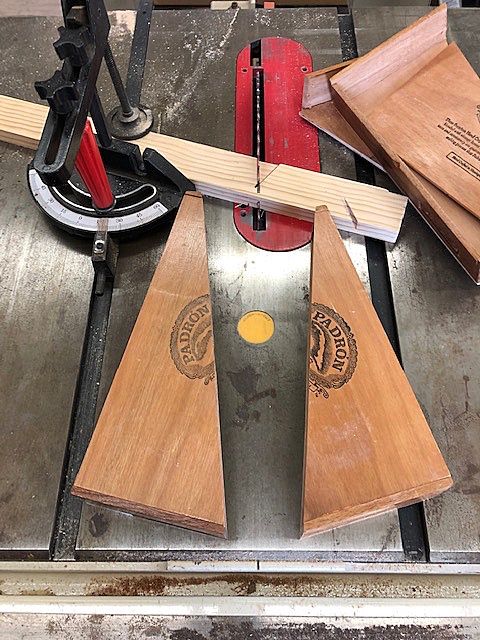 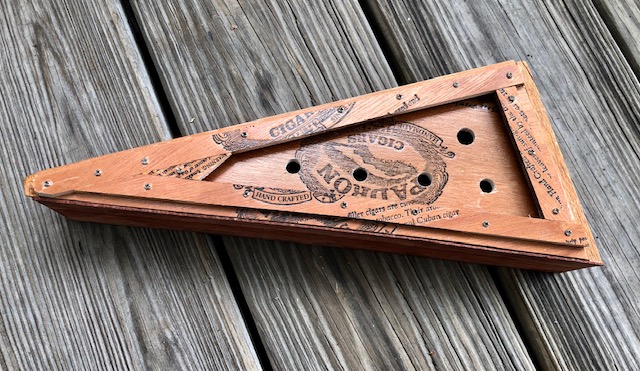 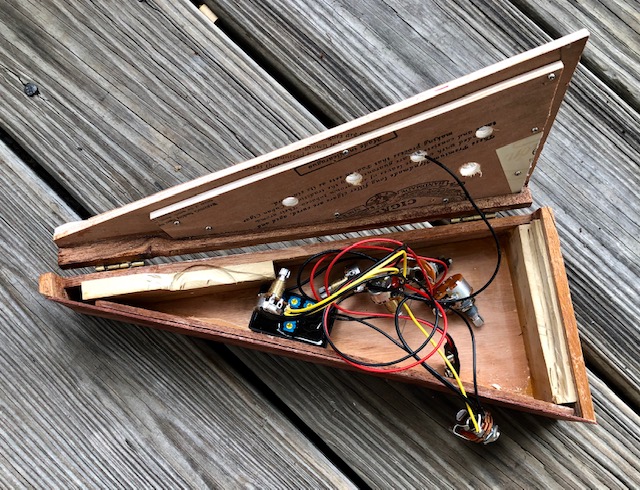 Started by Fergus Lester in Performances, How to Play, Lessons, Concerts. Last reply by robert jones 6 hours ago. 11 Replies 0 Likes

"I  knew a good  balladeer like you would have made that investment.  "
2 hours ago

"I showed Linda and she pointed out that the skeleton was crawling to get water, but failed and died!"
3 hours ago

KOOL DOG HOOCH replied to Sean Murphy's discussion Table saw for fretting, blades, and power
"I mistakenly misnamed the tool. I was referring to a scrollsaw, that is why I mentioned the coping…"
5 hours ago

I can't seem to upload any photos in the group "homemade guitars", nor just direct on the…See More
5 hours ago
0 Comments 0 Likes

"Thank you Bob. Love THAT reference! I still have both of the Gord's Gold albums on my old ipod"
5 hours ago

Darryl Tuttle replied to Sean Murphy's discussion Table saw for fretting, blades, and power
"i was lucky enough to find a used stewmac blade at a garage sale...the luthier developed…"
5 hours ago