A Christmas Present to myself ……
Well it’s all finished except for new resonator strings once I’ve played it in for a while.
This is the first guitar I have built for myself in about 12 years, and the first acoustic guitar built for me in 39 years.
On the day I started playing it we had the biggest storm in a long time, in fact the rain was so horizontal it only put 11mm in the rain gauge, so I called this guitar “Drought Breaker”, but I may have to change that to “wishful thinking”.
I find resonator guitars far easier to build, for me, than a regular acoustic guitar, especially this one as there was so many tasks I did not have to, or chose not to do. A far easier build for a beginner. It was by far the cheapest guitar I have ever built and the quickest, just over three weeks. The only major part, cost wise, I did not compromise on was tuning machines.
The plywood I used was leftovers from another project. Neck and fingerboard timbers were acquired over the years. All up including the Fishman [knockoff] preamp, good quality fretwire and Grover tuners, mother of pearl, bone nut and saddle and cone, coverplate and tailpiece, the cost $190.00AU. [ That was the cost of tuning Machines only, on my last build “Moonstone”]
I used rattle can lacquer in matt finish Instead of my usual Nitro finish, I wanted an oldy look so I did not use any edge bindings or purfling either.
All in all, it came out far better than I thought it would, and I would not hesitate at using laminated sheets [ply] in the future for a resonator guitar. After all that’s what they used to be made of, and many factory brands still are.
Just over three weeks of my life well spent……. I can’t put it down.
If you followed the Resonator Guitar Build Journey post thanks, and I hope some of you got something out of it. When do we get to hear this bad boy?

would love to hear it too Taff.

I don't know why those photos fell over.

My new slide bar just arrived, its a signature Robert Randolph but it does not seem to work good enough for me to go on u tube. I'll work on it.

i have that trouble with the strings on my guit.. they dont seem to play the right notes and have a lousy rythm ...lol

"I hope some of you got something out of it."

Me personally, I thought Santa was dropping it off under 'my' tree.LOL seriously Taff, one hell of a job, well done!

Tim I'm happy if I can get the open strings to play the correct note!

Hi again guy's thanks for the interest. I said there was a bit of a story at the end of this post, so to bore you all more......... What started me on the plywood build was an idea from my son, He started building his first guitar out of plywood first, instead of using his good tone wood first.

My son grew up crawling then walking through sawdust and shavings, and instead of fairytales he was fed the Blues. He never showed any interest in woodwork, even working his working time as a auto technician. Anyway he sent me some painting he had done, rolled up in the mail........I had to make the frames.

So in return I sent him, he's a three days drive away, a CBG. To save the cost of postage, like he did, I sent it in pieces, a kit in fact. As he was not a woodworker I made a video of the build process. I told him that I have to build my own picture frames he is going to have to build his own guitar. And he did. He then built three others that he designed, in his garage workshop. His only wood machine was a 10" bandsaw.

Cutting the story short, from that one project he turned his mechanical workshop into a wood shop, swapping motorbikes for wood machinery, and purpose built benches and all. He is now building two full size acoustics. Took a while.....pity he 3000km away.

great job, you always inspire me with your work on acoustics.

Hi Lonman, thanks for the kind comments. Yes I know I bang on about full size guitars a bit but there are members with interests in both areas.

Here are some CBG style reso photos more suited to this forum.

The photos show a large dog bowl, and a large neck block to suit a six string neck with heavier strings than normal. The only brace in the top is between the pickup hole and the resonator/dog bowl hole. The neck is an old modified Fender style neck. You can see that by putting a heal outside the box, extending the neck pocket, gives good reach to the high end frets. 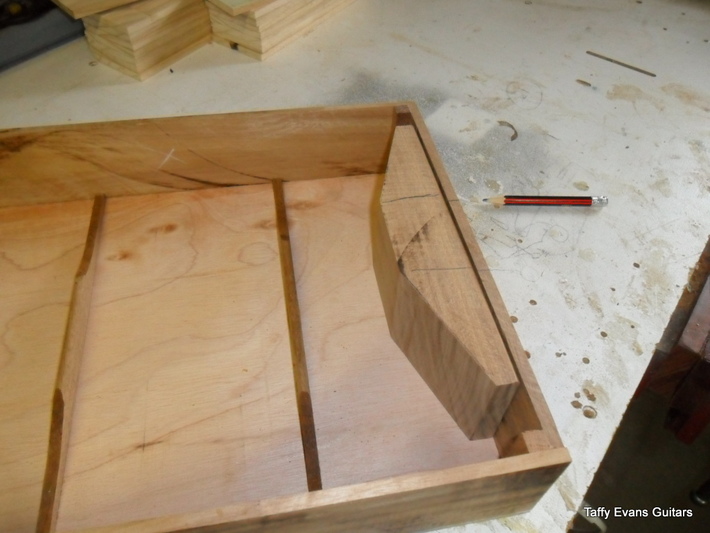 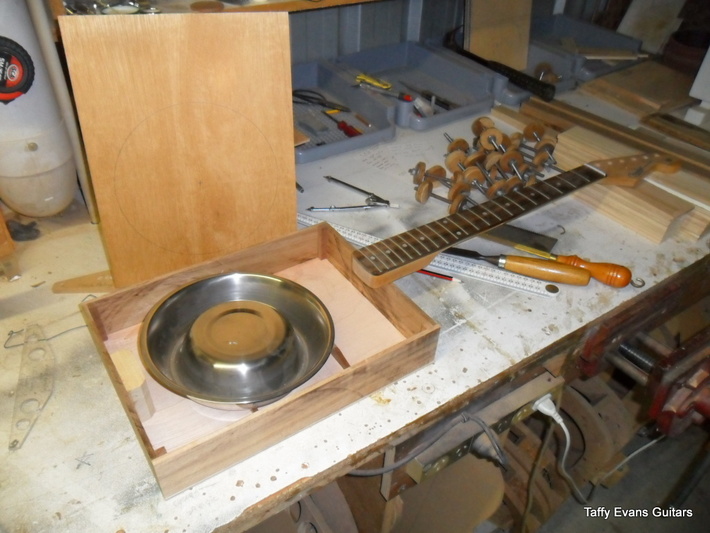 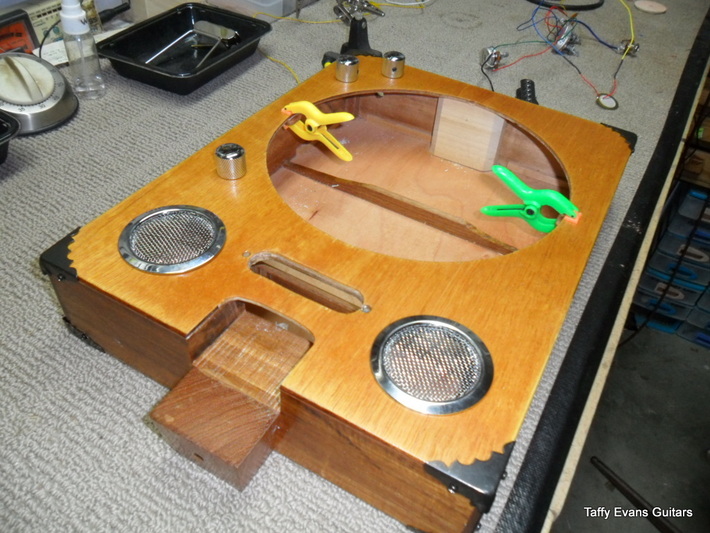 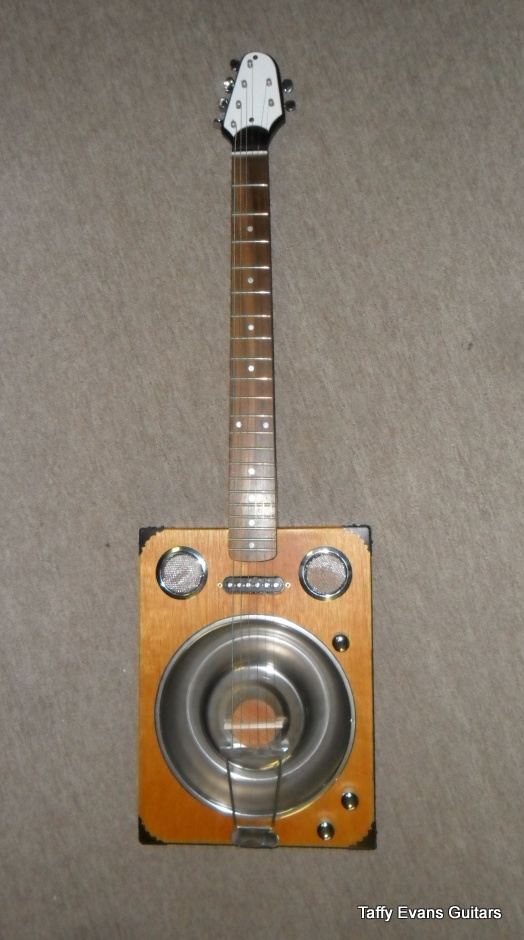 nicely moded headstock Taff. did you have to add wood or was the existing headstock big enough?

Hi Tim, the peghead was big enough. I just cut a template to suit.

As in the photo, I have 45 peghead templates from over the years in those containers on the bench. Hi guy's, well it seems I named this guitar correctly the "Droughtbreaker" . Since that first storm on the night I finished this guitar we have had fairly regular falls. In my neck of the woods we got 65mm overnight last night. Other parts of Australia have got too much too quick, but that's how it goes.

I took this photo and made a recording demo of the guitar to post along with it, silly me, the rain on the veranda roof was too loud so I will have to do it again.

Its Australia Day today have a good one you fellow Aussies. 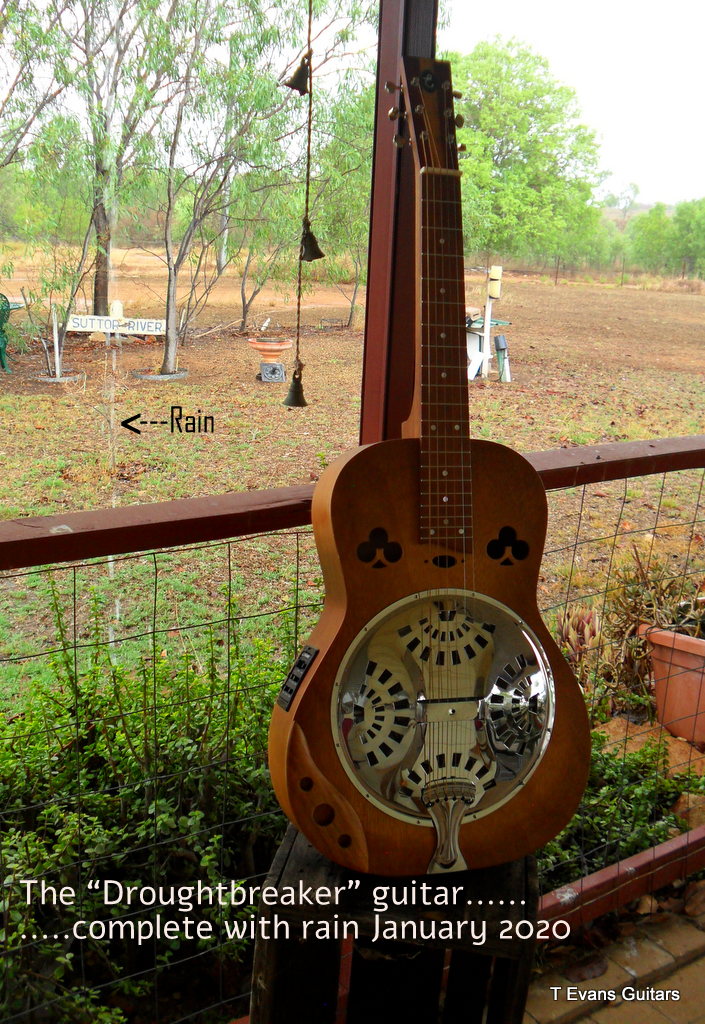 A nice sun burst soft and easy on the eyes. One of the first things I purchased after I built my first CBG was a resonator kit. Figured I would make one as soon as I felt comfortable with making CBG's. Not there yet but some day.

Started by the anonymous pick in Performances, How to Play, Lessons, Concerts. Last reply by gary herget 4 hours ago. 23 Replies 0 Likes

Started by Robert Bryan in Performances, How to Play, Lessons, Concerts 5 hours ago. 0 Replies 0 Likes

Started by Tim W in Performances, How to Play, Lessons, Concerts. Last reply by Tim W 18 hours ago. 8 Replies 0 Likes

Started by Cause the Blue rat in Performances, How to Play, Lessons, Concerts. Last reply by Myron Joe Hickel 22 hours ago. 1 Reply 2 Likes

Started by Paul scofield in Performances, How to Play, Lessons, Concerts. Last reply by Keith Rearick on Friday. 3 Replies 0 Likes

"Thanks folks. Gonna burn in the veins. Need some wood. what grows in Canada? besides canadabis?…"
33 minutes ago

"Thanks Jerry.  I have two more Ashtons,  one larger and the other one smaller than…"
1 hour ago

"Thats crazy stats on crashes. i be like " nope im good". ..im ok with coward right now."
1 hour ago

"i never heard of him?but i like looking up history stuff/ events. Thanks A.D."
2 hours ago

Taffy Evans replied to Brent Kasl's discussion Correcting a back bowed neck
"Hi If I can just make an comment here......a truss rod or reinforcing bar is usually used to…"
2 hours ago