Looking for a builder in WV...

I bought a reso from a guy in Alabama. He did a real nice job, but I am having some issues now that I've gotten into playing it...

• I've noticed on my B string that when I go above the 7th fret my notes go really sharp...to the point where it sounds like I'm hitting out of tune notes. Aggravating, as my high string carries my melody.

• On my D string, 5th fret almost sounds muted, but the notes around it sound okay. I can't figure this out?

• The G string is vibrating like crazy. I fingerpick, so I can play kinda hard at times to keep the volume going. Anyway, the G string is vibrating and I found out what's causing it lastnight (see photo below). Where it goes over the saddle on the biscuit, the string is actually hitting the screw on the biscuit because the groove on the saddle is cut so low...so it's causing this horrible vibration now because it's just touching it barely, but enough to cause a noise. I don't know how to fix it. I don't want to mess anything up.

I'd like to find an experienced builder who can help me solve these issues or at least let me know what's going on. I have no experience building these things and don't want to hurt my git. It sure would be great to find a builder in my neck of the woods. Any help would be appreciated.

Get a hold of Jim Morris on here, one of the best builders there is.

I did. I think he only lives about 30 minutes from me, but he can't fit me in to his busy schedule right now.

Did you ask him who he would recommend? You might have to bite the bullet, and mail it farther away. Pictures would help, so that others can help with figuring out what needs to be done to it.Try posting it on the state site here, and if on FB, post it with pics on the nation there. Even a video of it being played, would help too.

Jim isn't available til May. Ugh!

After letting my builder know what's going on, he informed me that he had an issue trying to get rid of the buzz. He put 3 screws under the saddle on the biscuit to try to stop it, but that didn't work, so he put a 4th screw on here: 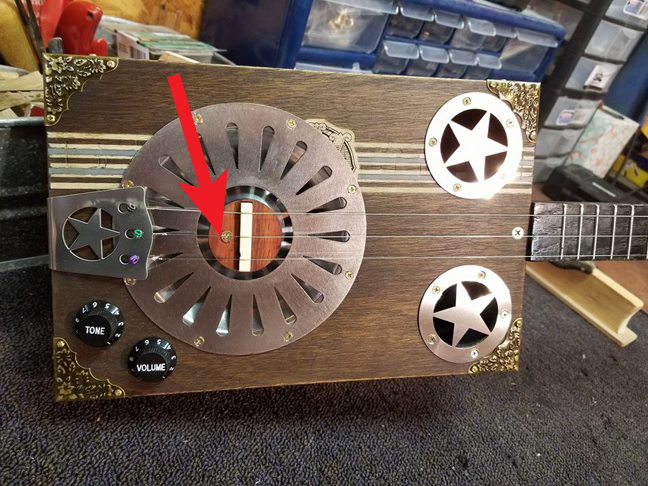 My middle string is touching this screw head, but my builder said this wouldn't cause the buzz, as the tension is too tight in this area...so it's either coming from the cone/cover or the domino/bridge/saddle. This was only the 3rd reso my builder has built. He's built lots of standard CBG's and they sound great, but if he had an issue with the buzz on this...maybe I need to find someone who has more experience building "resos" to help with this.

I have no idea what's causing the buzz, but I suspect it's either the saddle or it's the metal reso cone/cover vibrating in reaction to the tone of the G string. They really should put a super thin rubber ring gasket between the metal cone/cover, and also between the cone/git body...it would stop any vibration, and wouldn't hurt the tone.

B.S. if it's touching the screw, it causing vibration, I guarantee it.

I'm thinking of loosening the strings, and tightening that screw down. It actually sticks up a bit and is not flush to the wood surface. I just don't want to screw it down and find it is pushing the biscuit down lopsided. I don't want to mess anything up. I hope it burrows further into the biscuit. Also, the strings coming off the domino are just a hair above the edge of the biscuit.

you may split the biscuit or cause another issue trying to over tighten without anywhere for the screw to go, it would need countersunk to deepen it's head position.

That's what I figured, and that's why I'm afraid to touch it. Ugh, this sucks.

Look at that picture, the bridge should always be tilted longer on the thicker string. Also don't like the the tail piece being over the top of the resonator.

The tailpiece and the cone are not touching at all. That's not an issue.

Ok, several things going on here, but first, why aren't you having your builder rework it, I know any of us here whom have build a CBG for a customer damn sure would stand behind their work.

1st thing, I would never have used a wide nut for a saddle with deep grooves, causes several problems, vibrations...which your already experiencing, second, the saddle design has no inherent intonation capability, you can even adjust your saddle as it's screwed in, and yes, touching anything also causes vibration, I had used a mandolin tailpiece on my first CBG and it touched a string, I played hell figuring it out.

Suggestion, regardless who does your repair, new biscuit, new saddle, double check fret positions to scale. I strongly suggest a floating bridge saddle setup. Even if you could twist the biscuit to compensate, it would want to naturally return to it's original position due to the long groves, and twisting it wouldn't change much because of the grooves, only twisting the ends where it enters.

Not bashing on your builder, but certain characteristics of tuning must be adhered to in any build.

Your B string will have it's issues due to the same thing mentioned, it's one of those strings that need special attention to intonation even on a 6 string.

If I was closer, I'd say on a nice day take a road trip, a few beers later and we'd have it sorted out before you left, or....give me dimensions of your biscuit(height/diameter) (string spacing at nut) ( your best measurement from bottom of any string as it enters the nut measured to the top of biscuit) and I'll remake them either out of rosewood/oak/maple/walnut and bone saddle(or threaded rod) and send them to you free to try and replace it yourself if you fell confident enough. But Salem WV is 3-1/2 hrs 203 miles away. 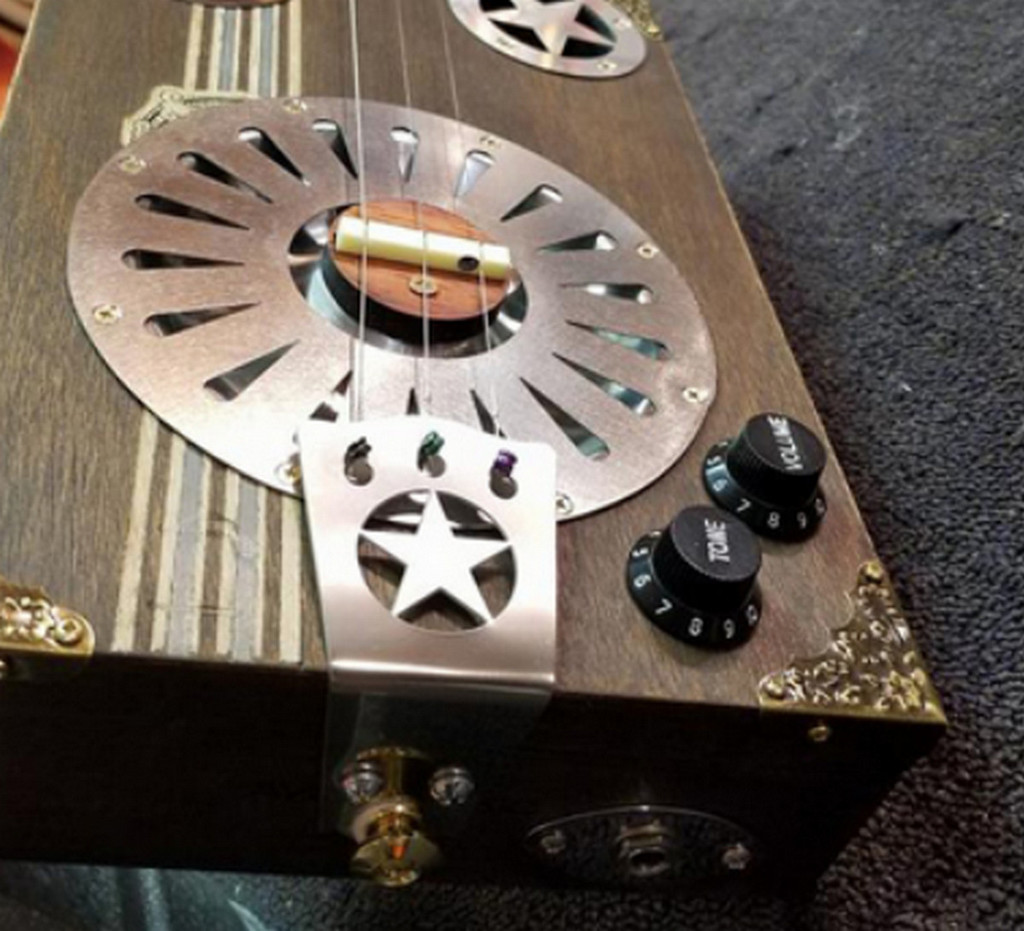 I had a real hard time getting my builder to build this reso. I don't know what the deal was exactly, but he seemed hesitant. Maybe that was an omen, LOL. I had confidence in him though because he did such a nice job on my first build. Regardless, he tried getting the buzz out of this thing, and I was okay for the first couple weeks I got it, and then the other night the buzz started. I have tried tightening down all the screws to no avail. The buzz is definitely coming from the body area...not the nut or frets. It's either the cone or the bridge.

Looking at the domino, it appears the middle string cut is a bit wider than the string (it's really hard to tell). My builder told me the domino is floating. I don't know why he didn't use the biscuit/saddle I sent him. This one: https://www.cbgitty.com/cigar-box-guitar-parts/resonator-parts/acou...

Just a place for us Texas boys to talk about music and festivals around the state.Anybody is…See More
3 hours ago
140 Comments 5 Likes

I vaguely remember mention of this on some youtube video, somewhere, in order to provide a 4-pole…See More
3 hours ago
0 Comments 0 Likes

Want to plug that thing in? Here's a place to share ideas about pickups (Both magnetic and piezo)…See More
3 hours ago
637 Comments 40 Likes

"Thank you so much for this video, Dave. I really needed to hear this today. "
4 hours ago