Headless three string building and playing. What I learned. I'm relatively new to the whole cbg world. I caught the bug last fall, and this is my sixth build. I worked my way from a simple parts kit supplied with a cigar box, add your own neck, to a paint can lid reso kit, followed by a fretless and two more conventional builds. For three of the five I used delta buckers, and for number five, scratch built the mahogany box body. Along the way I learned about neck profiling and action height, and the science of bridges and nuts.

I played number five a lot, and I’m actually learning how to play halfway decent, considering I started playing when I built the first one. One thing I found a bit frustrating was stability with a light, small bodied guitar. I don’t particularly like being harnessed into a strap, especially when seated, but the small cbg box body isn’t exactly ergonomic. I was always aware of splitting my attention between maintaining proper position, keeping the neck from dipping, while chasing frets and chord shapes. Late one evening I began looking at headless designs. I really didn’t like all the junk of a straight pull tuner system, and I’m not a fan of a hardtail bridge for acoustic design. It deadens the soundboard too much for my liking. So I thought about ways to incorporate headless and acoustic, while not cluttering  it all up with gobs of hardware. I reasoned that a roller tailpiece would allow the tuning gear to go inside the box, managing strings around corners,  and eventually settled on using off the shelf sealed gear tuners, and small ball hearing V pulleys to direct the strings as well as to create the roller tailpiece. Arranging the tuning heads side by side, the string pegs toward the tail, tuning knobs toward the back, all of the gear in “box within box” to isolate the hardware outside the acoustic chamber, yet within the perimeter of the box structure. Using 1/4x2 1/2 poplar for box sides gave me enough room inside the box for the hardware. Red cedar top and back and a hard maple neck and walnut fretboard gave it bright tone, and a relatively generous box size of 13x7 1/2 x 2 3/4 overall generates respectable volume. Along the way I kept friction as low as possible by using the rollers, and a polished steel saddle on a walnut bridge. Tuning is as slick and responsive, no ratchety resistance, and the strings ought to stay happy. Speaking of strings, my go to is LMM GDG, and I sourced them from D’Addario, .024, .034, .044, round wound from a 120XL set. Action is low. A dime jams under the strings halfway between the nut and first fret. Fretboard is walnut and is dead flat, and the soundboard absolutely parallel to the neck. With the bright western red cedar box with tight joints tightly glued (no screws) it’s bright and lively to play. Effortless gentle picking or bare finger playing yields full bright sound even at super low levels. Normal relatively gentle picking is quite loud, with sustain for days, yet smartly responsive to the subtlest palm muting. Plugged in, the surface mount wicked bucker works a treat, doing exactly what I expect it to. 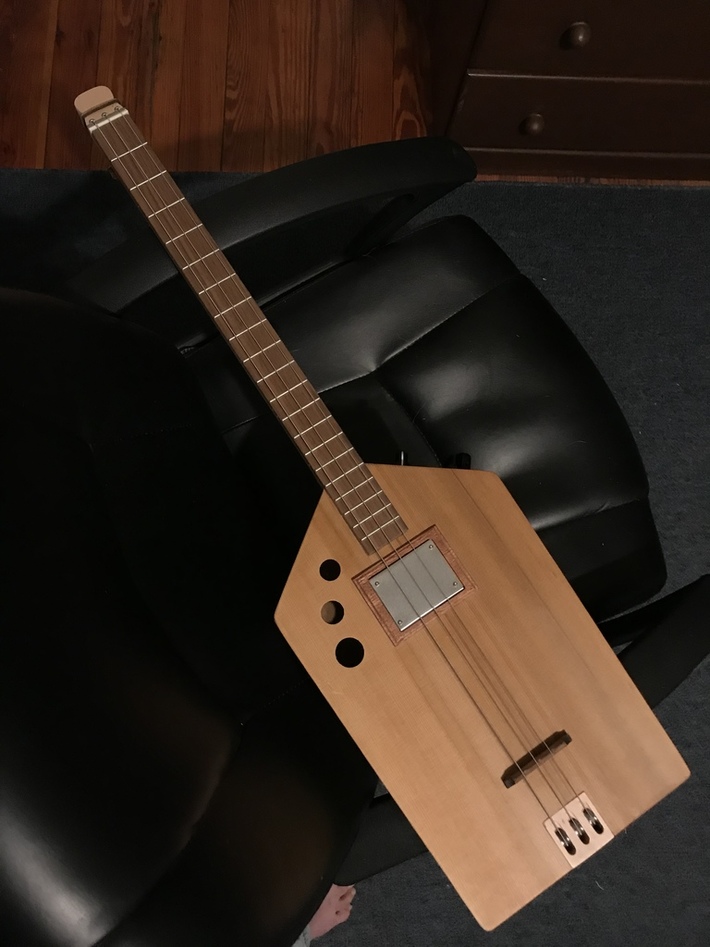 The playing ergonomics are really nice. The guitar weighs 45 ounces, and balances right at the pickup. So it sits happily on my knee, the slightly tapered sides making the neck point up a little, and no tendency to drop. I can literally release the neck and slide my hand up or down, and it stays put. It’s only been a few days, but I’m settling in and enjoying the headless acoustic experience a bunch. For any small bodied acoustic/electric guitar, getting that balance point inside the box, where it’ll sit on the flat of your hand and not tip, changes everything. Think tight joints, and wood with good sonic velocity to keep things lively, and you’ll smile when you play.

Very nicely executed!  However, I have one question: what's it like getting the strings into the hiidden away tuners?

it Isn’t bad. Feed a string over the roller, straight down through the hole, grab it with hemostats, push it through the eye in the peg, and grab the end with a second hemostat or needle nose, and wind up the slack. Think of the way a doctor sutures up a wound.

Started by Paul scofield in Performances, How to Play, Lessons, Concerts. Last reply by Keith Rearick 9 hours ago. 3 Replies 0 Likes

Started by the anonymous pick in Performances, How to Play, Lessons, Concerts. Last reply by Uncle John 14 hours ago. 21 Replies 0 Likes

James Pobog replied to James Pobog's discussion Necks
"I have a router table that I  haven't set up yet,  but will soon. Agree with …"
3 hours ago

Gary Hunt left a comment for Uncle John
"Thanks Uncle John for thr link to knotlenny's leeson,  Great for some new to the 3 string…"
3 hours ago

"I’m a barn yard boy Daniel. I like Chickens."
4 hours ago