A review by Shane Speal 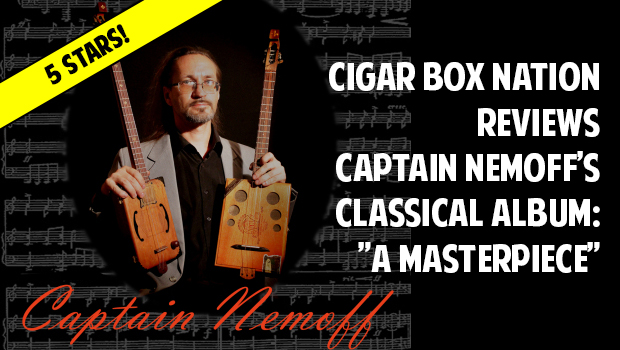 Legend has it, in the middle of 19th century, there were musicians who performed classical pieces on homemade instruments such as Cigar Box Guitar.  Unfortunately, there are no records of these unique
performances.

So what does classical music of the Renaissance sound like on cigar box guitar?

Hailing from Moscow, Russia, Evgeny Nemov, aka "Captain Nemoff" released an album that answers that question...and it's one of the best albums I've ever listened to.  Das Wohltemperirte Cigar Box Guitar (translated: The Well Tempered Cigar Box Guitar) is a download album available on CDBaby that mixes brilliant classical playing with the lo-fi ethos of the Cigar Box Guitar Revolution.

Nemoff starts off the album quietly, with a soft acoustic rendition of Albinoni's Adiago in G minor that eventually morphs into primal territory with an electric slide CBG (!) solo.  Oh how I love to hear the unfiltered sounds of trashy cigar boxes playing classical!  He covers a lot of the standards including Fur Elise and Greensleeves, mixing several homemade instruments together in beautifully layered pieces.

My brain nearly exploded Nemoff kicked in some massive foot stomping bass drum in the Celtic wedding song, Ev Chistr 'Ta, Laou!  This is rock and roll from another era.

Nemoff deeply considers and arranges with a mindset that only a cigar box guitarist could possess.

Perfectly ending the album, Nemoff delivers Shubert's Ave Maria in acoustic majesty, at first picking out single note leads and then mandolin-style tremolo picking.  It put tears in my eyes.

This is a masterpiece album.

Wait...I'll take it a step further.  In my honest opinion, this is one of the greatest cigar box guitar albums in the history of the modern movement.  Not only is Nemoff an incredible guitarist with one foot in the classical tradition, but he's also got one foot firmly in the cigar box guitar ethos... mixing lo-fi acoustic and electric tones brilliantly in each piece.

My heart is overjoyed as I listen to this album.

Buy the download of this album.  Buy it today. Blast it in your woodshops.  Play it in the house.  This is one for the ages.  5 stars.

I'm on my way to CDBaby quick as my one finger typing will take me!

Yup, just finished listening to most of the download. Inspiring and intimidating all at the same time!

I listened to it twice today, start to finish. Auld Lang Syne and Ave Maria got me all verklempt.

Great promotion Shane he deserves ever word you said. And don't forget he is an exceptional builder.

Good to see this site supporting other players

Permalink Reply by James A OBrien on October 25, 2015 at 11:30am
I've been looking for something like this.

This album if incredible.  Thanks for giving it the attention it deserves; primitive and classical, the way it should be.  Any chance you can get this guy over to PA for next year?

"Hi Rooster, we live in Uptown. -Glenn"
1 hour ago

Paul Craig replied to Paul Craig's discussion Bolt on neck to a set neck body? in the group Building a Cigar Box Guitar 101
"these 3 pics show the mock up, the contour I'll need to carve and the way the spacer gives the…"
5 hours ago

This has nothing to do with a CBG, but the situation I was dealing with and how I overcame it could…See More
5 hours ago
2 Comments 0 Likes